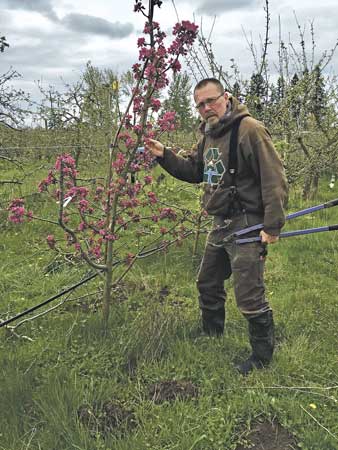 The list of apples grown at Queener Farm in Scio, OR includes many colorful names that span the alphabet: Alkemene, Coles Quince, Flowers of Kent, Hidden Rose, Lubsk Queen, Sansa, Yellow Bellflower and Zabergau Reinette are just a few of more than 100 unique apple varieties on the farm.

Jeannie Berg and her partners, Chris Homanics and Nick Routledge, work the historic Queener Farm, settled in the 1850s by Andrew Jackson Queener. Jeannie explained that the orchard was started by Charles Henry, who planted the first 1,500 apple trees in the 1950s. “He was into the apples that weren’t standard commodity apples at the time,” said Jeannie. “He had a mind for diversity within apples.”

The orchard was later purchased by Peter and Tommy VanderKamp, who added more European apples — British, Dutch and German varieties. They operated the orchard for about 20 years before Jeannie and her partners took over.

“It’s hard to make obscure apples work economically,” said Jeannie. “It isn’t an efficient orchard, and not big enough to compete against large commodity growers. Peter and Tommy understood that and expanded the selection to 115 different varieties.” Peter and Tommy also developed a list of clients in Portland, OR, which helped move the unusual varieties to chefs and cider makers.

Jeannie said that when the orchard was on the market, the most likely sale would be to someone who would remove the trees and replace them with more modern varieties grown in a high-density system. “That kind of land with good water rights would be great for a monocrop,” she said. “They were excited that the people buying it had an appreciation for what was there and would keep it.”

After purchasing the farm, Jeannie, Chris and Nick made some changes. First, they transitioned to using organic practices. “After some soil tests showed high copper, we stopped using that,” said Jeannie. “Now, as we expand and add different varieties, we focus on varieties that are disease resistant, that will be resilient in organic systems. Some of our apples would never need spraying and be fine, others will be dead in two years.”

Jeannie stopped using sprays of any kind in 2015 to determine what problems were present. “The codling moth population exploded,” she said. “In 2016, we started a program of seven rounds of a biological product and beneficial nematodes in the soil. We also placed chickens under the trees. That was more labor intensive but brought the pressure down significantly.”

Jeannie said the previous owners had done some top grafting and those trees bore full crops in 2015. “We realized that was the fastest way to switch varieties,” she said. “We have a lot of small grafted trees from last year, and it’ll be a much longer wait with those. Through the process of top grafting, where we cut a tree nearly down and graft in another variety, we’re transitioning to more resilient varieties.”

In the short time she’s been working the orchard, Jeannie has noticed that apple varieties vary significantly in vigor. “We put some Belle de Boskoop on Bud9 and that’s an incredibly vigorous variety,” she said. “Those trees, even though it’s a much smaller rootstock, are a lot like a normal vigor tree on M26. The Belle de Boskoops on M26 are huge and take some effort to control.”

Regarding the 2012 grafts, Jeannie said the previous owners grafted each of the first limbs in addition to the trunk. She also said the challenge with that, especially with vigorous scions, is that they shoot straight out to the row space. “Typically we would put five or six scions on, one on each of the first lower group of limbs and a couple on the trunk,” she said. “We scaled that back and are only using a couple on the trunk and the two most lateral limbs so we get a tree that is growing along the trellis.”

In 2015, the trees were pruned and trained more aggressively to the four-wire system that was already in place. Rather than tying limbs to the wires, selected limbs are trained to a more lateral pattern. “This year we visited with some people doing much more aggressive method of pruning,” said Jeannie. “It’s two-stage pruning that involves going back into the orchard in May and June to brush off new shoots.”

Before Jeannie and her partners arrived on the farm in 2015, Jeannie had been a vegetable farmer and was familiar with the CSA model. “When I looked at all these different apple varieties and thought about how to market them, I came up with the Apple Club, which is basically an apple CSA,” she said. “People get a box of apples every other week during apple season; about seven or eight boxes total each year.” In addition to the opportunity to sample 50 to 60 apple varieties every season, Apple Club members receive a newsletter with information about the history and uses of unique apples.

Another value-added product available from Queener Farm is scion wood, sold primarily to apple collectors throughout the country. “There are a lot of young whips, about one year old, that we don’t yet cut scions from,” said Jeannie. “We added another 77 apple varieties that aren’t on the list, and this year we’ll add another 100 or more new varieties.”

In addition to apples, Queener Farm offers plums, pears and a variety of berries including red, black, white and pink currants; gooseberries and aronia berries. About 50 varieties of table grapes will be added this year.

There’s a cider press on the farm, which is available for people who want to purchase apples and press cider at the farm. A local hard cider maker also has his big press on the property, which does 30 gallons a squeeze. “Sometimes we take apples to a nearby farm that has a large press and UV pasteurization,” said Jeannie. “That way we can sell it to chefs.”

The farm also hosts a hard cider club, which allows members to come to the farm several times a year for a workshop where they press cider and go home with a carboy. The session starts with a discussion about cider apple varieties, then members chop apples, operate the press and wash and fill bottles.

Jeannie and her partners are in the process of compiling a book for homeowners seeking information about various apple varieties for home use. Information will include storage notes, disease resilience and plenty of photos. “We’re sharing these amazing apples with the world,” she said, “and helping people figure out how to grow them.”