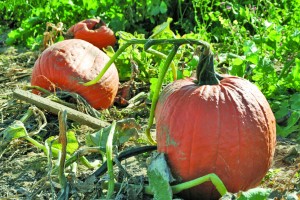 by Sally Colby
Knowing what consumers want when they shop for fresh market fruits and vegetables is the key to growers’ success in planning and growing crops. Consumer tastes and trends vary from year to year and are often influenced by popular magazine and other media features. How can growers predict what consumers will want when they’re planning and planting for the season? Becoming familiar with ag census data as well as local trends will help minimize loss due to flooded markets. Penn State extension educator Tom Ford says that data on cucurbit crops from the ag census indicate that vine crop production has dropped. Ford says the problem with ag census data is that it’s a snapshot and doesn’t always accurately reflect what’s being grown. With that said, national vine crop data from 2007 to 2012, indicates that acreage for pumpkin and cantaloupe has dropped; cucumbers and winter squash acreage is up and summer squash and watermelon has declined. The overall picture is that the only cucurbit crop on the upswing is winter squash. “As people look at buying local and from year-round farmers markets, we’re seeing that winter squash is becoming more and more important to the consumer diet in the United States,” said Ford.
However, the United States is also a major importer of winter squash, with 300,000 metric tons imported in 2013. “Mexico supplies 95 percent of the squash coming into the United States,” said Ford. “Leading squash production states include Florida, California, New York and Michigan.” Top states for cucumber production include Florida and Michigan. “What drives cucumber production is the fast-food industry,” said Ford. “How well the fast food industry goes determines how well the cucumber industry goes, especially because a good portion of them are used for pickles.” Ford added that 60 percent of cukes are consumed fresh, 40 percent are consumed as pickles and one-third of those pickles are consumed via fast food. He also noted that the assault on the fast food industry impacts the cucumber industry. Ford says Illinois leads the nation in pumpkin production, with 90 percent of pumpkins grown within a 90-mile radius of Peoria, IL. While Illinois pumpkins are grown primarily for processing, other pumpkin-production states, including California, Ohio, Pennsylvania, New York and Michigan, are producing for seasonal decorations.
Watermelon is grown primarily in Florida, Georgia, California and Texas, and Ford says there’s an interesting demographic that goes with watermelon: women eat more watermelon than men do. “Think about varieties, and the size of the watermelon,” said Ford, adding that women aren’t likely to purchase large, oblong melons that were traditionally grown and sold. “Take that into thinking process. Eighty-five of melons are purchased for home consumption at retail outlets such as grocery stores, farmers markets and retail farm markets. China is the leading producer of watermelon in the world.” Extension educator Steve Bogash says he’s seeing a trend among eastern producers to grow early season zucchini in high tunnels. “It’s one of the biggest challenges,” he said. “Blossom end rot always seems to hit the first couple of zucchini coming off. If you’re going to try to grow zucchini, make sure you account for the fact that the vines aren’t going to be very mobile with calcium. They aren’t going to draw it out of the roots – you’ll have to do a lot of foliar calcium sprays. You’ll also need bees, but it’s easy to put too big of a colony of bumblebees in a zucchini house. There aren’t that many flowers in there, and the bees will beat the stuffing out of the flowers if there are too many bees.”