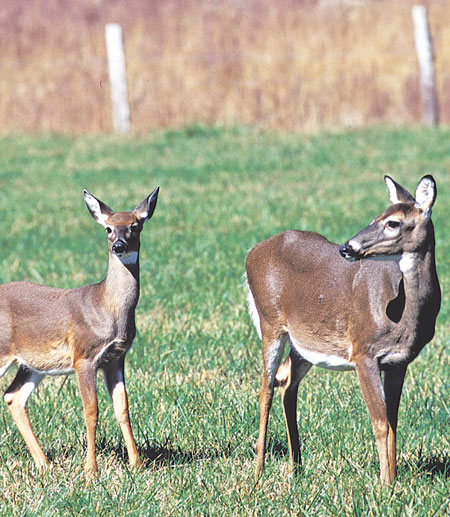 “We have to understand how formidable pest deer really are,” said Owen. “It’s often easy to minimize the impact of damage that occurs early in the rotation, and those costs are important to look at.”

Owen says one aspect that makes deer difficult to manage is that they’re capable of learning, which separates them from insects that damage Christmas trees. “We have old deer that teach young deer what to eat, what is safe and where to go,” he said. “Deer function as a social herd, and that makes it more complex.” Owen added that unlike managing insect pests, the goal with deer management isn’t simply to kill something or break a predetermined cycle — it’s interrupting behavior.

“You might think you have a strategy or solution for managing deer, but deer behavior is a moving target,” said Owen. “It’s a matter of staying one step ahead of them.”

Understanding basic facts about deer habits can help growers meet the challenge. Deer like a variety in their diet, and apparently seek different textures. “Deer access their world through their mouths,” said Owen, “so they’re constantly tasting this and that to learn more about what’s around them as well as what might be edible.”

Owen says when weather conditions are harsh and deer are hungry, they’re willing to eat otherwise unpalatable food. In winter, when deciduous trees are bare and groundcover and grasses are snow-covered, deer will eat whatever they can to maintain body temperature and weight. “Deer damage can occur at any time of the year, but is most likely to occur in winter,” said Owen. “That’s the hardest time for us to be out there managing for them.”

Deer damage is variable, with differences in damage across regions, from county to county, and even among neighboring farms. Owen references a farm that had one kind of deer damage on one side of a field, and different damage from a different herd on the other side. He says this is one reason growers must have more than one strategy.

Owen describes two major types of damage from deer: horning and browse damage. Horning of mature trees usually occurs in fall, during rut or prior to rut. “As antlers mature, deer scratch a hard to reach itch on the back of their head or on the horn itself,” he said. “But often, they’re marking territory in a hormone-driven demonstration of rage and superiority as a male. That has nothing to do with food, and the tree is just in the wrong place at the wrong time.”

Horning results in broken branches and stripped bark, which often kills the entire top of the tree. For the most part, horning is usually limited to field edges, and often occurs to the same trees over and over again. However, there’s no way to predict when and where a buck will choose to horn.

Browse damage of young trees is a significant problem for many growers. Deer bite off buds, tips of shoots, whole shoots or branches, and sometimes the entire tree. Owen says first year transplants are often a deer favorite due to higher salt content coming in from the nursery.

“Frasers in particular seem very sensitive to any kind of injury to the stem,” said Owen.

One of the main long-term consequences of deer damage is crop uniformity. If enough trees survive deer damage, there’s cost to bringing trees back to a more uniform shape. Costs to consider include planting, pruning and shearing; which are often more complicated than typical pruning and take more time. There’s also the added cost of keeping a crop in the field longer. “Even if you do everything right, you may have a loss of tree quality,” said Owen. “For the worst-damaged trees, you’re getting a wreath tree or a number two price instead of a number one price.”

Can a grower hunt their way out of a problem? Owen says probably not, unless hunters are active at night and during harvest season because that’s when deer pressure begins. “In North Carolina, that’s when pressure starts — in mid-November and December,” he said. “Then there’s another heavy hit in February when we start getting heavier snow on the ground.”

Owen says selective hunting can be somewhat effective. “If you take out the mature doe in the herd, you create the greatest disruption,” he said. “They’re the ones that teach the offspring what to eat. There’s a chance at breaking the cycle in the Christmas tree field.” He added that hunting seasons don’t overlap with browsing pressure, and that trophy hunters and hunt clubs have different goals than growers. “They’re after antlers, you’re after managing mature does. There’s a real disconnect and you often don’t get what you need.” Some states have depredation permits, but rules vary by state so it’s important to understand local laws and develop a working relationship with the game warden.

Certain cultural practices can make a significant dent in deer damage, but not all practices are legal in every state. “In North Carolina, hunters can get a depredation permit and leave carcasses in the field,” said Owen. “The carcasses bring coyotes and other predators that could be a further discouragement to deer coming to the field.” He says the practice has been successful when used with deer repellants.

Another strategy is to create feeding stations away from trees. This diverts the herd to other areas. “Food plots can be used the same way,” said Owen. “As those are used by hunters, you have to pay attention to what the rules are.”

Owen says some farmers have success with cleared windrows. Stumps from tree harvest are pushed into a pile, creating a permanent fence that shifts access from a portion of the property. “Some growers use salt blocks to divert deer to other areas,” he said. “Growers who manage groundcovers as part of weed control may find that deer browse is reduced when deer have other sources of food.”

Tall, permanent fencing around Christmas trees works in some states. Owen has worked with a variety of electric fencing, including fences that create an optical illusion that changes depth perception so deer think they can’t jump over it. Such fences work as long as deer think they can’t clear such a fence. Owen says some smaller growers use invisible fence to keep dogs within the boundaries to deter deer.

Chemical deterrents vary in type and length of effectiveness; depending on rainfall because some wash off faster than others. “When there’s an odor, deer turn away before they start biting,” he said. “A lot of those depend on putrescent odor like sulfur, blood or egg. Not only is there a bad smell, but it instigates a fear response.”