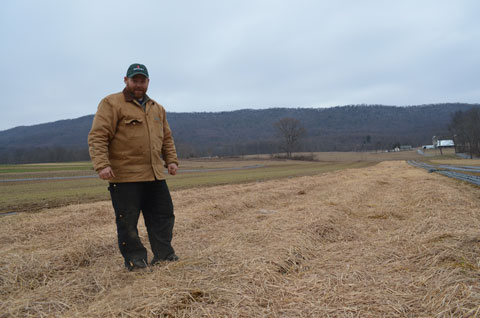 The foundation of dry farming is site assessment and familiarity with the soil.
Photo by Sally Colby

Water is scarce in the west, and many farmers have dealt with additional limits resulting in challenging growing conditions.

Although water is essential for crop production, farmers are learning that it’s possible to grow good crops with almost no water. The system is dry farming, which relies on residual moisture from the rainy season rather than irrigation.

While the Willamette Valley receives more than 40 inches of rain annually, the growing season is relatively dry. “Between May and September is when we see the least amount of rainfall – usually one to two inches,” said Amy Garrett, Oregon State University Extension Service. “This is the period when we’re growing our favorite summer vegetables like tomatoes, squash and melons.” Garrett and others are conducting research on a variety of dry farming aspects as they introduce the concept to farmers who are adapting to changing conditions.

Garrett cites several reasons farmers might consider switching to dry farming. Western farmers growing with no water rights or limited water availability are left in limbo, and in 2015 (a drought year), growers who were used to irrigating throughout the growing season had their irrigation cut off early. Garrett noted that some growers who had reliable water sources considered alternatives to irrigated production.

Dry farming can help reduce inputs, although the technique involves careful planning throughout the year, especially at planting. Improved produce quality is another benefit, and Garrett said that in side-by-side tastings, participants who tasted samples from both irrigated and dry-farmed crops reported enhanced flavor in dry-farmed crops.

The foundation of dry farming is site assessment and familiarity with the soil. “On all the sites we’re dry farming, we pull five-foot soil cores,” said Garrett. “With dry farming, crops are rooting a lot deeper, so it’s informative to know what’s happening at five feet.” Garrett said that when one core was pulled in Oregon in 2016, the water table was three feet below the soil surface, yet the tomatoes grown there were large.

Although raised beds are widely used by vegetable growers, they don’t work well in dry farming because they don’t hold moisture. Garrett said level or even sunken beds are preferable.

An important consideration in dry farming is proximity to other plants. The system is designed around water as the limiting resource, so consider nearby plants that will compete for water. Slope and aspect are also critical in site consideration. “If you’re on the south side of a slope versus the north side, evapotranspiration is going to happen more quickly,” said Garrett. “In the Willamette Valley, afternoon wind kicks in, especially in summer. Some sites are wide open with no windbreak, and wind can increase water loss through transpiration.”

Garrett encouraged those trying dry farming to look at plants as indicators. Observe and record the locations and time of year plants remain green and lush into August. “If plants haven’t seen much rain since May, haven’t been irrigated and still look good into August and September, chances are they’re in a spot where they’re still accessing moisture,” she said.

Soil and bed preparation timing is key. Garrett encourages early soil preparation, and urges farmers to make sure seeds are started or transplants are in the ground when there is still moisture in surface soil. “A lot of dry farmers will apply amendments early in spring rather than with planting,” she said. “Irrigated farmers will apply fertilizer in the hole they’re digging or at the time of planting, but since we aren’t irrigating and a lot of nutrients require some moisture at the surface to be plant-available, amendments are applied earlier so they can get down to where the roots will be active later in the growing season.”

Organic matter, which is primarily from cover crops, is another important factor in enhancing soil water holding capacity. In irrigated systems, cover crops are often allowed to go to full flower, perhaps shoulder high. In dry farming, the cover crop is taken down much earlier because plants are pulling moisture from the soil that summer crops will need. “I flail mow cover crops when they’re about knee-high,” said Garrett. “It helps the soil surface to dry enough so we can get it prepped early.”

Those new to dry farming should keep in mind that timing for soil preparation and planting can vary each year. “Dry farming is the opposite of calendar farming,” said Garrett. “Sometimes we have a long, cool, wet spring and sometimes we get started early. It calls us to be present and monitoring soil moisture to prep and plant when the time is right, not when soil is dry on the surface.”

Garrett said standard planting recommendations may include sowing seeds at one-quarter or a half-inch deep, but the first inch or two of soil may be dry. “A lot of dry farmers will pull the dry soil back and put the seed in contact with moist soil,” she said. “Sometimes that’s a lot deeper than what’s recommended.” The key is ensuring seed contact with moist soil rather than following labeled instructions, and pressing firmly around the seed or base of transplant to ensure good seed to soil contact.

Eliminating weeds is critical in preserving soil moisture. Diligent weed management is critical, and Garrett suggested thinking of each weed as a little straw that drains moisture. Mulch or plastic can help preserve moisture, but can also lead to other problems. Garrett said in one trial, weed fabric was left in place for several years, which resulted in a massive explosion in the vole population that decimated that year’s crop.

Areas for future research include practices for dry-farmed perennial systems such as berries and orchard crops, effects of different mulches on various dry-farmed crops, best practices for nutrient management, fungal inoculants in assisting with drought tolerance, selecting annual crop varieties and root stocks for orchard crops, soil amendments such as biochar to increase water holding capacity and the economics of dry farming and how reduced inputs and reduced yield affect the bottom line.

Additional information about dry farming, including results of variety trials, is available at centerforsmallfarms.oregonstate.edu/dryfarm.