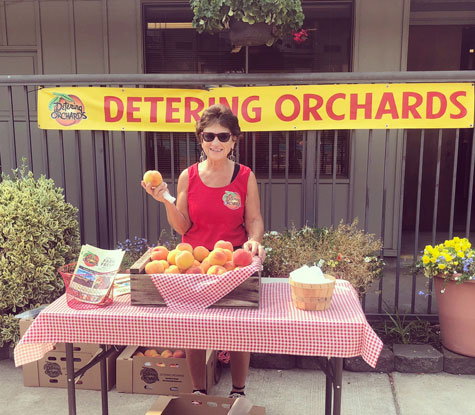 Cindy Dixon, retail manager at Detering Orchards, shows off the farm’s peaches. Dixon has worked with the orchard since she was 12 years old.

Although Detering Orchards in Harrisburg, OR, is known for its festivities and agritourism throughout the growing season, when it comes to Halloween and autumn, the orchard really shines.

Harvest activities start to kick off in September, with the Detering’s own Oktoberfest, which includes sauerkraut canning demonstrations, Polish dogs for sale and craft beer from a tapped pumpkin. Moving into October, wagon rides, hay and corn mazes and tractor rides to the pumpkin patch are some free ways the farm incorporates children.

One of their more popular attractions for families is an apple blaster, where visitors slingshot apples into targets; the apples used have already fallen from the tree and are sold to visitors to avoid waste. Equally as favored is the free treasure mining experience, where kids mine for shiny “crystals” in the sand with a strainer.

“There’s free things children can do so it’s not an overly expensive trip when you come out,” Dixon said.

Other free activities for families include visiting the cows, goats and chickens; playing on the orchard’s newly expanded playground park; and rides on the cow train, a new addition.

“I want people to come out and have entertainment options,” Stephen Demergasso, owner of Detering Orchards, said. Demergasso bought the orchard two years ago from the Detering family after Roger Detering died. The orchard has been a community staple for over 40 years.

“I’m trying to think of more ways to get people to come out here,” he added. “Why make the drive here? We can’t compete with the prices in grocery stores, so we create a premium experience for people.”

For the adults, Detering Orchards has a saloon that sells beers and ciders, often featuring fruit from the orchard itself. The farm has a partnership with local Eugene Brewery Elkhorn and has worked with Alesong Brewery in Lorane.

Demergasso calls the process “farm to brewery,” and said the orchard also presses its own cider on site. 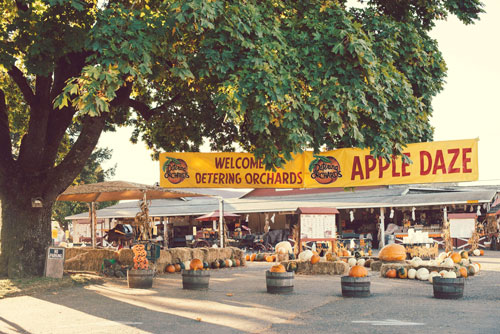 Along with the saloon, there’s a Cider Barn that sells non-alcoholic cider as well as vegetables, pies, hot dogs and tamales. There is even a mechanical bull and live music on weekends.

For Demergasso, the agritainment focus of the orchard is important. The first thing he did when he took over the farm was figure out how to add activities to draw out families. “We want to make it fun for people to come out here,” he said.

Beyond being one of the few agritainment farms in the area, Detering Orchards was designed around a U-pick concept, with different produce mixed in between the acres of trees. The orchard is one of the biggest in the area, and allows visitors to pick throughout the season.

“People love to pick their own food and a lot of farms don’t do that,” Dixon said. “It’s the biggest thing that makes us different from everyone else. They can really pick what they’re putting on the table.”

Dixon has worked at Detering Orchards for almost 50 years. At 12, she answered an ad for a summer picking job and found it made more per hour than babysitting. “I’ve been here ever since,” she said.

Detering Orchards grows over 40 crops. Among those are 32 different apple varieties and eight peach varieties. Demergasso’s favorite fruit is the Spring Crest peach. He added that there were so many crops and varieties that he didn’t even know the extent of everything the orchard offered in the first year. Along with selling at the farm stand, Detering sells its produce to Market of Choice in Eugene and Corvallis.

Although it’s most known for its events during the harvest and Halloween stretch, Dixon said that Detering offers events from June through Christmas.

During the summer, Detering offers pie making and canning demonstrations, and into November the farm helps visitors prepare for Thanksgiving dinner as well as selling gift baskets and boxes for the holiday season.

Demergasso added that there’s a culture of coming out to farms for October weekends, but there’s also opportunity for families to have a farm experience throughout the summer too.

“Our mission is to provide families the chance to participate in a working farm by picking their own fruit and veggies, feeding the animals and more family friendly activities,” he said.

This mission is still true to the heart of the Detering Family as well.

“Roger Detering believed that children should know where their produce and food comes from,” Dixon said. “If they don’t come to a farm, they just assume it comes from the grocery store. We want people to see that we grow probably 90% of what we sell. The biggest thing is having all this available to the public.”