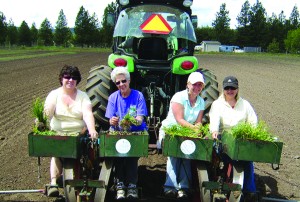 by Sally Colby
Farms usually start or expand with a plan in place, but Scott Carver says his parents, Marv and Jo Carver, were accidental farmers. “They had a nursery in the mid-1970s that specialized in dwarf conifers for landscaping,” said Scott. “In 1977, we moved all of the nursery stock to where we are now in Newman Lake, WA. Then the economy tanked, and landscaping was something people could do without.”
Scott explained that his parents planted some strawberries to generate income, and found people were eager to visit the farm for U-pick. Next, the family planted tomatoes, cucumbers, green beans and other vegetables, and eventually grew about 25 different crops.
While Scott was studying to become a biology teacher at Washington State University, he learned about another option. “My dad read an article about how the state was short on ag teachers,” said Scott. “I decided to add two years to fulfill the requirements for that program. After substitute teaching for a year, I started a high school horticulture program, then got my masters in ag education.” Today, Scott splits his time as an ag teacher and part-time farmer throughout the school year, and farms full-time in summer.
Scott’s parents play a critical role in keeping the farm functioning smoothly. They do a lot of the behind the scenes work from maintenance and field work to bookkeeping and advertising, and work 140 days straight throughout the growing season.
The 130-acre farm includes about 70 acres in fruit and vegetable production, with roughly 40 acres devoted to Christmas trees. One unique feature of Carver Farms is that all crops, including crops that aren’t traditionally offered as U-pick, are available for customers to pick their own. Scott believes this is one reason Carver Farms sees a lot of customer crossover between seasons — customers who picked strawberries and peas in spring are likely to return for sweet corn and eggplant, then again in fall for pumpkins, and finish the season with a Christmas tree they’ve selected and cut.
Some vegetables, including tomatoes, peppers, onions and eggplant, are started in a greenhouse. All other crops are direct-seeded. In addition to vegetable favorites, Carver Farms offers small fruits including strawberries, raspberries, blackberries and marionberries.
One of Carver Farms’ main challenges is supplying water to all crops. “We only get about 18 inches of rain a year in the Spokane Valley,” said Scott, noting that the farm’s water source is an aquifer managed through the irrigation district. “Keeping the farm irrigated is a big time consumer.”
In fall, customers enjoy a hayride to the field where they can pick winter squash, gourds and pumpkins. When it comes to selecting pumpkins, Scott looks for varieties with long, thick stems. Because Scott and Tamryn’s teaching schedules limit their ability to manage school tours, tours aren’t offered. “We’ve had up to 800 elementary kids on the farm at one time,” said Scott. “Our employees are worn out by the end of October, so we have to figure out how to retool that.”
The first Christmas trees were established in 2000 on land that wasn’t in vegetable production. A more serious Christmas tree effort started in 2002 when the Carvers planted 40 acres of Grand fir, Fraser fir, Concolor fir, Blue Spruce, Nordmann fir and Trojan fir; a species native to Turkey. Drought-resistant fescue is planted between the rows, and Scott plans to incorporate clover to provide a source of nectar for bees.
Trees are marketed as choose and cut, and all are sold at one price. “People come to the farm and we give them a free hayride to the field,” said Scott. “They are dropped off, then pick up a saw at the saw stand, pick a tree, tag it and keep half of the tag. The crew goes out and picks up the trees in the field, and by the time people get back to the sales area, the tree is ready for them and all we have to do is match up numbers. We also do shaking and baling for no charge.”
Scott says when they were new to growing Christmas trees, they found help in an organization, Inland Empire Christmas Tree Association, whose goal it was to encourage customers to have a good experience at any of the member farms. “When we joined in 2002, a lot of the members were retired foresters or retired DNR people who had land and loved the conifer industry,” said Scott. “They provided a wealth of information. When I joined, they offered to help us learn what works and what doesn’t. We all work together rather than competing — we all sell out of trees every year.”
“We aren’t trying to win customers from year to year,” said Scott. “We want to have happy customers for 20 years. Some of the first families who came to our farm in the late 70s are bringing their kids now. We don’t look at a customer as a customer for that day, we like to look at them as a customer for years.”
Carver Farms uses both the farm website and Facebook to keep customers informed about crops’ readiness for picking. Tamryn manages the website, and both Scott and Tamryn post on Facebook and answer customers’ questions. “People appreciate getting answers right away,” said Scott. “We try to update the website as often as possible so people will return. We check statistics (on website traffic) through Google analytics, and found that our website traffic has consistently increased by about 50 percent every year.”
One of Scott’s future plans is to experiment with cover crops and no-till for upright crops such as sweet corn and possibly peppers and green beans. “We’ll plant winter rye in October, and in spring, we’ll cut and bale the straw to use on the strawberry fields as mulch,” he explained. “Then we’ll replant corn into the stubble using a no-till planter. When the corn is finished, we’ll chop it and put the silage right back onto the ground, then reseed winter rye.”