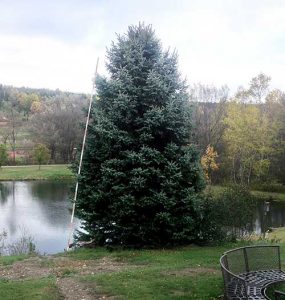 by Samantha Graves
Last year, the Domes Tree Farm outside of Bliss, NY won a statewide competition resulting in one of their 30-foot Concolor Fir trees being selected for display in front of Lincoln Center in New York City’s Upper West Side. “It was quite an honor,” said Bill Domes, who co-owns the tree farm with his wife Katie.
The Concolor Fir was narrow and tall, a perfect fit for the limited green space in front of the building. Domes said the tree was so well-regarded, two more were ordered for this holiday season; another Concolor for Lincoln Center, and a second tree, a Colorado Blue Spruce, that will appear before the Adam Clayton Powell Jr. State Office Building in Harlem.
According to the Christmas Tree Farmers Association of NY, the Domes farm is one of approximately 875 operational Christmas tree farms in New York, a state that ranks fourth behind Oregon, North Carolina, and Pennsylvania.
Bill Domes is a second generation Christmas tree farmer who often jokes he grew up with a pair of pruning shears in his hands. Said Domes, “After high school I spent four years in the navy.” Domes said he didn’t think he’d ever want to return home to farm, however after leaving home, he realized Christmas tree farming is “in his blood.”
When he returned to Bliss, Domes explained, “I purchased a neighbor’s farm that connected to the home farm.” While his father continued farming Christmas trees next door, Domes planted his own trees, but knew he would need to diversify to remain competitive. “While waiting for my trees to grow to market size, I started a garden center and landscape business,” he said.
Today, Domes sells trees during the holiday season and to landscape customers, a decision which led to the purchase of equipment used for uprooting and moving trees, including those being displayed in New York City this December.
“My father was still operating the home farm for his own livelihood,” explained Domes. “He stayed with just Christmas trees, while I got into the digging of the trees for landscaping as well as Christmas trees.” This decision allowed the business to flourish. “I expanded into larger tree markets and am now able to sell large trees for both landscaping and Christmas.”
When his father and mother passed away, Domes purchase the adjoining “home farm” and continued to sell Christmas trees to a longtime, loyal customer base, while continuing to expand the business. The family opened a farm store on site, the Domes Country Market, which carries dry goods, Amish bulk goods, candy and a wide variety of other treats, supplies and gifts, including Amish-made rugs, baskets and toys.
Domes commented economic fluctuations are the biggest factor in the business. “The Christmas tree market for us has stayed about the same thanks to loyal customers,” said Domes. “The landscape market for the trees changes all the time with the changing economy.” Domes’ ability to grow and deliver large trees has allowed him to operate within a very specific niche, and the success of the farm store and loyal customer base means the business has remained stable, even in recent years when other tree farms have struggled.
The trees selected for Lincoln Center and the State Office Building were cut mid-November and were delivered to New York City by Domes. That’s no small feat; the Concolor Fir measures 30 feet tall and 15 feet wide at the base, while the Colorado Blue Spruce is the same height, but slightly less narrow, measuring 16 feet at its base.
Domes plans to attend the Nov. 28 lighting of the Lincoln Center tree, but between Christmas tree sales and the farm store, he cannot make the Dec. 8 event in Harlem. “It’s such a busy time of the year,” said Domes.