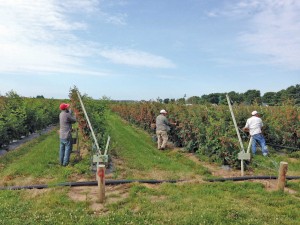 by Sally Colby
An ambitious young boy didn’t have any way of knowing what he started when he began selling vegetables at an open-air stand on his family’s Circleville, Ohio farm. But young Brent Rhoads’ venture was successful; within a few years the family constructed a small building where they offered their own freshly picked produce along with local meats and cheeses.
After college and time in the military, Brent and his wife Kathy continued to expand the operation. Today, Rhoads Farm has grown to include three divisions. Rhoads Garden Center is a retail garden center and farm market, it’s owned and managed by Carly (Rhoads) Neff. Carly’s husband Jeremy Neff owns Rhoads Landscaping. The third division is a produce farm and tree nursery owned and operated by Brett Rhoads, son of Brent and Kathy. Brent is still actively involved in the tree farm, known as Split Rail Nursery, and Brent’s wife Tara and his mother Kathy sell Rhoads Farm produce at Columbus area farmers’ markets.
The family’s combined businesses produce shade and ornamental trees, Christmas trees, grain and produce on about 500 acres. After obtaining a degree in horticulture and crop science from Ohio State University, Brett returned to the farm and hasn’t looked back. He says that the challenge for his growing family has been to continually seek profitable ways to add and maintain enterprises as they go through the process of a multi-year transition to the younger generation. “We’ve had to get creative,” said Brett. “As our parents start to look at retirement, the children are getting into different areas of the business. My brother-in-law is a landscape architect, so he was drawn to the landscape company. My sister enjoys the retail setting and farm market, and the farm and tree nursery are a natural fit for me.”
One Rhoads Farm product is blackberries, added to the produce enterprise in 2010. Brett started with 10 acres of blackberries and has since expanded to 22 acres, making Rhoads Farm the largest grower of blackberries in the Midwest. Brett says although blackberries thrive in the soils and summer temperatures of the Midwest, they don’t handle deep cold in winter. His solution is to grow the soft fruit using a trellis system. “The system allows us to get high prices,” he said. “There’s a lot of demand for fresh fruit in summer. We fill the void – the southern U.S. season has finished and California has yet to start, so we help fill that gap.”
Blackberry plants are trained to the trellis as they are planted with trellising that allows the plants to be laid down on the ground. “We lay the plants down in fall and cover them with three ounce row cover to protect them through winter,” said Brett, adding that 15,000 sandbags help keep the row cover in place. “They’re on the ground through spring, until all the bloom is on one side, then we lift them in May.” Brett explains that when the plants are down, the new growth and blooms orient toward the sun – all on one side. “After pollination, we rotate that over, then all the fruit is on one side,” he said. “That saves dramatically on disease control and harvest labor.”
The rows are 12-feet apart, which is ample space for laying the plants down and maneuvering spray equipment and mowers between the rows. Because blackberries bear on two-year wood, old canes are pruned in early fall. Brett noted that although the spotted wing drosophila is in Ohio, Rhoads hasn’t seen it yet, and hopes that his proactive approach to IPM will keep it away.
The clamshells in which blackberries are packed include the Ohio Proud label. Most blackberries are sold wholesale through a marketing company that distributes them to grocers throughout the upper Midwest and East. Rhoads Farm is GAP certified, which means water testing, strict worker sanitation regulations and adherence to other guidelines required to pass the third-party audit. Strawberries are another popular small fruit grown on Rhoads Farm. In the growing program Brett describes as ‘one year then done’, new plants are put in the ground in September for harvest the following spring. Each year, Brett selects several California varieties to determine which will survive winter. “We like to grow a large berry that’s like a California berry, but with Midwestern flavor,” he said. “That’s why we grow in an annual system.”
The Rhoads Garden Center starts the season with hanging baskets and bedding plants, and fresh produce throughout the growing season. The center also hosts clinics and hands-on workshops. The landscaping service specializes in outdoor living, plant installations and ponds. Many of the shade trees grown at the tree nursery are used for installations in local municipalities, businesses and homes.
The cut-your own Christmas tree enterprise includes mostly Douglas and Canaan fir. “They are little slower growing,” said Brett, “but they’re higher end trees. They have good needle retention and deep, blue-green color. We sell a lot of 10’ to 14’ foot trees.” Brett says that he anticipated a slowdown in cut-your-own Christmas trees during the economic downturn, but has found that the business has continued to grow. “I think people like the family involvement. They can pick a day and come out to cut a tree as a family. We’ve definitely seen an increase in that side of the business.”