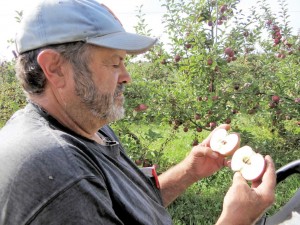 by Elizabeth A. Tomlin
“Most small family farms have already closed,” remarked Dale Baker, while sorting Asian pears at his fruit farm in the Hudson Valley. “This farm has been in my family for over 100 years but the fruit part was started by my grandfather, Gordon Baker, in the early 1920s.”
The farm, which lies just a few miles south of the city of Hudson, NY, consists of a total of 104 acres, with 75 acres fenced in with 8 foot woven wire fencing, “to escape the tremendous deer problem that had developed in the 70s and 80s, with the switch to more dwarfing trees — and with my change to growing more stone fruits that began in the 90s.”
Of that 75 acres, about 50 are currently in actual production.
Baker’s father and three brothers grew up on the farm, with his father returning from WWII to work the farm full time. At that time the farm also consisted of another 60 acre parcel on the opposite side of the road, where apples, pears, peaches and black sour cherries were grown. Baker says that parcel of property was separated from the main farm in the mid-60s when his grandfather retired and was then added to his uncle’s adjacent farm.
Baker grew up working along side of his father on the fruit farm, attending local schools and then graduating from Cobleskill College with an AAS and went on to earn a BS from Cornell in 1976.
“After employment in a few horticultural jobs, I returned to working full time on the farm, where I worked full time with my Dad until illness forced him to retire around 1990. Then I took over the business.”
Up until that time the farm had grown mostly apples and pears that were sold in the wholesale market, along with both sweet and tart cherries that — starting in the late ‘60s — were sold ‘U-Pick’. Peaches that were produced were mainly sold to a farm stand in Western Massachusetts.
“After attempting to run the farm as it was in the past for a few years, I began to replace apple acreage and pears with more cherries, peach varieties, plums, apricots, different varieties of pears and currants — and changed the marketing focus from selling mainly wholesale to selling apples and pears ‘pick your own’, and selling to smaller wholesale accounts eventually starting to sell at farmers’ markets.”
As regulations and demands changed, Baker found that marketing wholesale became unprofitable.
“In recent years we have downsized a bit more, added more varieties of stone fruits, withdrawn more from the wholesale markets and do most marketing at three weekly farmers’ markets, a few restaurants, roadside markets and ‘U-pick’ sweet and tart cherries and apples.”
Baker says finding good employees who are willing to work has been an ongoing problem and has tried hiring local young people to train.
“I’ve never found a kid that really wants to work. They say they want to work, but they never show up and work.”
He comments he had “one good, dependable, capable worker that could operate the equipment” and could run the farm when Baker was away. Unfortunately that person passed on about five years ago. “Now, when I leave here, everything stops.”
His wife, Susan, helps out when she is not working off of the farm. She also helps out at some of the farmers markets.
“Here and the farmers markets, that’s my whole life.”
The orchard boasts many good return customers, such as the Mariana family who are natives of Italy. “They have the most beautiful Golden apples and pears! I picked and kept on picking! I could not stop!” said Anna Mariani, who was at the farm with her three sisters and brother. Mariani says she would share her apples with her two daughters. “I’m sure to receive their sample of apple pie — naturally made with some McIntosh Apples that I reserved to pick for the occasion.”
Baker says he has seen many changes in the customers over the years. “There is a big difference now in the ‘U picks’,” Baker says. Where as families used to come and gather many bags of fruit for canning, now they mostly come for a family outing and only take home one bag of fruit.
He says he sees many farms turning into “entertainment farming”, with many farms adding additional features, such as corn mazes and hayrides to attract families and kids.
However, after having had several surgeries to repair damage to both shoulders, wrists and knees, Baker does not see making those kind of major changes to his farm.
“The bigger farms get bigger, the smaller farms just disappear — or turn into CSAs,” Baker said. “I don’t know how much longer I can do this.”