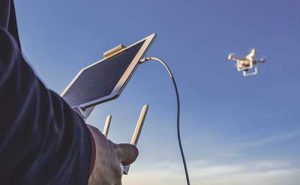 by Sally Colby
Dr. Joe Sommer, professor of mechanical engineering at Penn State University, says that Midwest farmers who have been using unmanned aircraft over grain crops have gained valuable information from this technology. “They already know how to fly 15-foot fixed wing aircraft over thousand-acre fields,” he said.
Sommer believes that the same aircraft, also known as drones, UASs or UAVs, have a useful purpose on Christmas tree farms. “UAVs are nothing more than fancy cell phones,” he said. “Your cell phone has an accelerometer, a gyro, (which tells you the rate), a compass, GPS, WiFi, a LiPo battery, two cameras and a motor. Your cell phone has a connection to the cellular network; most UAVs do not. But that’s the only difference. Other than that, they have the same hardware and technology that’s inside a cell phone.”
Through wireless communication from the controller to the vehicle, the operator can determine where the UAV travels. Operators are required by law to maintain a visual line of sight, which means the operator must be able to see it at all times. “We typically use the 2.4 GHz frequency,” said Sommer. “We send commands from the controls to the vehicle, or uplink, but we also get downlink from the vehicle. We get a first-person view on the iPhone or Android and it will do an on-screen display.”
Sommer explains that both the batteries in a cell phone and in the UAV are lithium polymer battery, or LiPo. “Batteries require about an hour and one half to charge, so it’s worth having more than one,” he said. “Do not discharge these below their discharge rate. They won’t catch fire when you do that, but they might catch fire when you recharge it. You must use a charger that balances all the cells.” Sommer added that the new lithium iron phosphate batteries being developed aren’t quite as dangerous.
In general, a UAV can stay in the air for about 20 to 25 minutes. They have a limited payload, although some can carry up to two pounds. “They will hold station in the wind up to about 20 to 25 miles per hour, but it can be dicey when you want to land,” said Sommer. “They’ll auto take-off and auto-land with no problem. Most have a return-to-home feature. If you fly too far away and can’t see the UAV, you can press the ‘return to home’ button and the UAV will automatically climb to a prescribed height, like about 100 feet, and will come home and auto land. The reason it climbs is because there might be a big tree or a barn between it and home.”
Although the cameras in a UAV can take either video or still photos, Sommer prefers photographs. “Every time it takes a photograph, inside the metadata, there’s a header in the file that tells the exact latitude, longitude and altitude of where that picture was taken,” he explained. “I know exactly where it is, and that’s important for stitching hundreds of photos back together for one big picture.”
As for applications in the Christmas tree industry, Sommer foresees UAVs as valuable for growers who want to get a good overview of what’s happening in the fields — a view that isn’t possible any other way.
One of the main ways the grower can benefit is through observing the NDVI, or normalized difference vegetative index, obtained from a UAV flight. “Healthy plants reflect near-infrared much more than they reflect other colors,” said Sommer. “A healthy plant reflects a lot of green — it looks green to us, but we can’t see near-infrared. As the plant is stressed, the amount of near-infrared that’s reflected drops much faster than the amount of green. The key is to look at the amount of near-infrared coming from a plant. NDVI can help you determine whether or not plants are stressed.” Sommer says that a measure of the green color index (DGCI) will also be useful for Christmas tree growers because it’s associated with nitrogen content.
There’s UAV software for both preflight and postflight applications. “I lay out a pattern, use a satellite map and the software will generate a serpentine pattern for the vehicle to go down and back with the right amount of overlap, and it will plan where it’s going to take photos,” said Sommer. “Then you actually download this to your iPhone/Android and it will automatically start ‘here’ and launch the vehicle. The vehicle will fly at a fixed altitude, taking hundreds of photos, and it will automatically land. Once you’ve laid out this pattern, you can fly the same pattern over and over again and use it to count trees.”
Once there are about 400 photos, the card can be sent for post-flight photogrammetry, which involves reconstructing photos from the flight into an orthomosaic — an aerial photograph that is geometrically corrected.
“Now that you have the information back from the flight, it’s time for an actionable decision,” said Sommer. “You need to be able to go out and do something. If you see that your trees are under stress due to drought and you have irrigation, you can turn it on the water. If there are vines, insects or diseases, you can make a decision. No matter what you use unmanned aircraft for, use it to make an actionable decision. Pretty pictures are nice, but they aren’t going to get you anywhere.”
It’s important to note that all unmanned aircraft systems must be flown under FAA rules, which can be found in detail at www.faa.gov/uas.