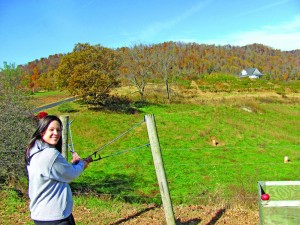 by Karl H. Kazaks
LOVINGSTON, VA — Everyone in the commercial apple market has had to contend with the rise of China. Drumheller’s Orchard has responded the way many other small growers have — by retrenching and repositioning.
For decades, Drumheller’s was one of many small Virginia producers that grew and packed apples for the commercial market. They grew mainly just a handful of varieties — Red and Golden Delicious, Rome, Stayman, Winesap. At peak, they were growing 125 acres of apples.
“When the commercial market started going downhill,” Kevin Drumheller said, the family had to re-evaluate their strategy. They cut back on production, with apple acreage shrinking to a low of 45 acres. They also switched to selling mainly retail.
Today, most of the Drumhellers’ sales come from their orchard store as well as at two farmers markets. They also sell to roadside truck resellers and to three cideries.
The Drumhellers already had an experience with targeting retail customers. Kevin’s grandfather Everette — who founded the family orchard in 1937 — used to sell the orchard’s produce throughout central and eastern Virginia.
“Grandaddy,” Kevin recalled, “he loved loading up peaches and apples and going on the road. He always would go east,” outside of Virginia’s apple and peach growing region.
In the same way, today the Drumhellers go east to sell at farmers markets: they attend grower-only markets in Richmond and Williamsburg.
The Drumhellers also were experienced at attracting retail customers to their orchard. Darrell and Doris Drumheller, Kevin’s parents, started hosting apple festivals on their farm in the late 1970s.
“We were the first in the area to have an apple festival,” Doris recalled.
Today, the festival at Drumheller’s attracts about 3,500 people per day. Visitors come from throughout Virginia as well as the Carolinas, West Virginia, and the Washington, D.C. area.
One of the highlights at the festival is the apple slingshot. The Drumhellers have built slingshots into one of their fence lines, and positioned two barrels in an adjoining field. Customers can purchase five apples for one dollar, and try their best to hit one of the barrels. If they hit a barrel, they win a peck of apples.
“It’s a huge hit,” said Kevin’s daughter, Morgan Johnston.
“It’s not that they need that peck of apples,” Doris said. “They just want to see if they can do it.”
Today the orchard has 80 acres of apples, about three-quarters of which is in production, and 30 acres of peaches, about half of which is under production.
“We’ll be growing the next seven to eight years,” Kevin said, as recently planted acres start producing.
The orchard is also more diverse, with 18 varieties of apples (including dwarf Fuji and Honeycrisp) and 19 varieties of peaches. The decision to focus on more varieties has been part of the family’s repositioning strategy — to have peaches and apples available at all points throughout the season.
That availability of supply has permitted the Drumhellers to tap into the recent rise of the Buy Fresh, Buy Local movement.
“That’s what customers want nowadays,” Kevin said. “Fresh and local.”
The Drumhellers still have the equipment they had when they were packing apples — the water dumper, brushes, and tables — and they still use it to process their fruit. Gone, though, are the worries of participating in the wholesale market.
“We don’t have to worry,” Doris said, “‘Are we going to sell what we’ve got packed?’”
Instead, they have strived to create ways to add value to their retail sales.
Darrell (who passed away in 2005), designed and created an electric apple butter stirrer that makes that job easier as well as provides an attraction to visiting customers. A corn maze is another feature customers enjoy.
School trips have also become a prominent part of the Drumhellers’ business. The visiting children get to go on a hay ride, tour the apple barn, take home a bag of apples and a pumpkin from the Drumhellers’ pumpkin patch, and have a picnic lunch.
The Drumhellers have also built a kitchen in their apple barn to make products like cakes, jams, and jellies.
Kevin makes the peach jams and jellies. “We use all of our seconds,” he said “We used to throw them over the bank.”
So how has Drumheller’s been able to survive when other orchards have gone under?
“I guess it’s just born and bred into you,” Doris said.