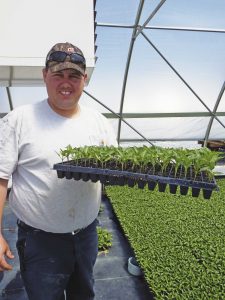 by Jon M. Casey
When it comes to making educated decisions in today’s hi-tech world of vegetable and crop farming, growers have a number of ways to provide themselves with the information they need to make wise choices. Making the most of technology and data analysis is one of the best ways to help get that job done. No better example of that is Dusty Lane Farms, LLC, Elmer, NJ under the leadership of managing partner, Michael Brooks, and the way he oversees his family operation, from greenhouse to harvest. Dusty Lane Farms has come a long way since its beginnings in 1773.
“I am the eighth generation working this farm,” said Brooks. “My Dad, William, bought the farm from his grandfather after his father returned from WWII and found a career working at DuPont. Dad and my mother Diane are still involved in the operation with me as landowners and partners. Mom takes care of the books and Dad is semi-retired. Together the three of us and four full-time employees take care of approximately 1,500 acres of cropland,” he said.
“My wife Emily has a career away from the farm, so she’s not involved in the daily operations,” he added. “We have a 10-month old daughter Juliette and she’s at work with me today.” Brooks said his other siblings, sisters Sarah and Emily, are not actively involved in the farming operation.
Michael said he began working on the farm as a youngster. After high school, he attended college for about a year and one-half but he decided to return to the area to pursue a career in farming. Initially, in 2000, he began farming independently raising strawberries and spinach. Then, in 2002, he expanded his operation to include tomatoes, grain and vegetables.
In 2006, the family combined operations to form Dusty Lane Farms, LLC. At that time, they were farming approximately 1,200 acres. Today, Michael serves as day-to-day operations manager supervising crop rotation, field selections and financial analysis among his many duties.
“We grow potatoes for the chipping industry. That is our primary crop at this time,” he said. “We also grow tomatoes for processing at Furmano along with peppers for the fresh market and spinach and sweet corn for Seabrook Brothers. As part of our crop rotation program, we grow corn and soybeans. Over the winter, we plant a grass cover crop.”
Michael explained that they start tomato and pepper transplants in the three 31-foot by 300-foot greenhouses located on the main farm. “We use the transplants ourselves and we also sell them to other growers and to Furmano for their growers to plant as well.”
“We made a lot of inroads in the use of current technology after we formed our LLC in 2006. One of the first things we did was to install RTK auto-steer in our tractors to help make fieldwork more efficient. Today we have four tractors outfitted with auto-steer.”
A more recent addition to the farm’s technological improvements was the addition of a farm management software program from Syngenta® called the AgriEdge Excelsior® total-farm management and record-keeping software program. “We tried several management software programs over the years, but we went with the AgriEdge Excelsior Land.db® software program about five years ago,” he said. “We hired Tyler Bill to work on the farm while he was attending college, with the idea that he could not only help with the farming, but he would also devote a portion of his time to managing the AgriEdge program as part of his responsibilities. His oversight of the system has worked out very well.”
Bill agrees, “It took me a couple of years to learn the program inside and out, but once I learned how much information the program could provide, I probably only spend about an hour per week updating the system with the information the crew provides on their daily field and spray records,” he said.
In addition to farming year round, Dusty Lane Farms is also a parts dealership for Pik-Rite and RJ Equipment parts.
For more information on Dusty Lane Farms visit their website at www.dustylanefarms.com .