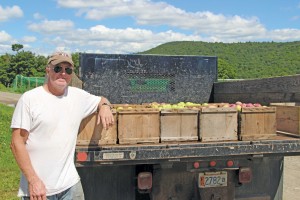 by Laura Rodley
When Edward Scott was a boy growing up in Ashfield, MA his family’s farm had an apple orchard, chickens and cows. He became well known for his gift of working with apple trees. “The kids would pick apples when the other apple pickers were away at war,” said his daughter, Donna Scott. Her mother Janice and Edward attended the same school. “During WWII, the high school closed and students went out to help farmers. Apples were a big crop in this area, a way farmers got money. They’d pick apples in the fall and ship them.”
Then Scott went off to war. “When he got out of the service in the Korean War, he was approached by the old farmers — in that time, everyone had a farm, trees, cows — to take over their trees. He rented the trees from the farmers, gave the farmer and his wife an income.”
Now his son, licensed logger Colin Scott and Colin’s wife Laura raise fruit and Irish Dexter cattle on the 140 acre Buckland, MA farm, managing the Buckland fruit stand. Donna manages the Ashfield store. Colin logs and farms fulltime but, “When Dad retired, the farm came first, logging came second.”
Diversifying, they grow three acres of stone fruit; peaches, nectarines, and plums, a half acre of blueberries and raspberries, plus sell cider, maple syrup, honey, pumpkins, winter squash and potatoes. They used to grow 40 acres of apples and now grow 20.
“We were always a wholesale. Wholesales all got cut back competing against the world market. Now we’re changing over more towards local sales,” said Colin.
They pack apples to ship to Fanueil Hall and restaurants in Boston, local schools and bakeries. They’ve been supplying Williamsburg General Store for 30 years.
“What I like best is the end product; it finally looks good, tastes good, I did a good job growing it. I enjoy working outside,” said Colin, both in his orchards and in the woods, leaving it looking nice, knowing he has improved things. They have planted honeyberries and juneberries and have the coveted Evercrisp, half Honeycrisp, half Fuji, coming next spring.
Donna has packed, sold and picked, despite her vibrant fear of heights. When she was younger, the trees were tall, not dwarfed or espaliered. “I hated going up there, it was very high; the ladder could be 20 feet or longer, had spikes on the end. You put it up between the branches and twist it so you don’t knock any apples off and then jam the spikes into the ground. I grafted, thinned; I did not prune. My brother pruned. I avoided getting on the ladder as much as I could,” she said.
“People don’t realize when an apple is picked off a tree, they are not uniform size.” A trained packer can pick up an apple, and in two to three seconds determine its size, color and imperfection or perfection. Some markets want them with 50 percent color; others want 75 percent.
Area grandparents would come pick. “Men and women in the area that had grown up on farms would get a part-time job with us just for a few weeks, extra money for Christmas presents, a way of getting extra income, a lot of retired men and women. I tell you I had all I could do to keep up with them. They knew how to work and they worked hard. Most picking nowadays is done by family,” said Donna.
They sold original Red Delicious: smaller, striped, very juicy, sweet, nice tasting. Then the West Coast developed a bigger type with a uniform red color, without much taste. Folks came in requesting their striped Red Delicious until their few remaining trees, 80 to 90 years old, had to be cut down. “People buy with their eyes. The West Coast ruined the (Red Delicious) market,” she said.
“We’re introducing new varieties. People are coming in and trying a couple different apples. It took me a couple years to have people try Ginger Gold ‘cause they’re green. Now people come in demanding them.”
The old varieties were more resistant. The Baldwins my father inherited stored well. It was ugly, and nobody wanted it. Now people realize if they want cider or a good tasting apple, they need Baldwins.”
The Scotts have a walk-in 22 by 10 foot cooler with a matching one downstairs kept cool by two faithful compressors that were old when her father built the shop in the 60s. Customers, especially men, admire them. In Buckland is a 20,000 square foot storage where apples are stored, packed and shipped to Boston.
As this season started a week and half early, the store followed suit, offering mix and match for people to get a little bit of everything. Since everyone’s taste buds differ, Donna uses the Cortland as a neutral point. When customers ask, she answers that this apple is tarter or sweeter than a Cortland. “Cortland; can use it for anything. When in doubt, go for a Co