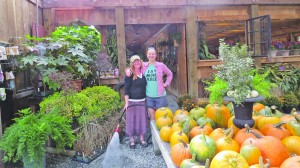 by Sally Colby
When Pooh and Anne Sprague purchased a 170-acre farm in Plainfield, NH on the banks of the Connecticut River, they were buying a bit of agricultural history. Edgewater Farm had been owned and operated by one family since 1835, until the Spragues purchased it in 1974.

At the suggestion of their county agent and the previous owner of the farm, the Spragues planted strawberries and harvested their first crop in 1976. By 1983, both Pooh and Anne were working full-time on the farm, adding crops and greenhouses to meet local demand for fresh fruits and vegetables.
Today, Edgewater Farm runs smoothly with several key players: Pooh and Anne, their daughter Sarah Houde, their son Ray and his wife Jenny and Michael Harrington, who has worked on the farm since he was 12 years old. Pooh, Ray and Mike do the field work and Ray handles wholesale accounts with coops in the Upper Valley area. Sarah manages the farm stand and co-manages the greenhouse operation with her mother. Raymond’s wife Jenny manages the CSA, and produces a weekly informational newsletter, including recipes, for customers. Jenny also runs the retail section of the vegetable stand.
Edgewater Farm maintains 11 greenhouses dedicated to growing grafted tomatoes. Pooh starts the seeds for grafted tomatoes in January so different houses can be planted in succession. Raymond and Pooh handle the grafting and fill the houses with a variety of tomatoes. Thirteen additional greenhouses are used for growing perennials, ornamentals, bedding plants, hanging baskets and herbs. The farm opens the third week in April with bedding plants, and the farm stand opens the second week in June, which coincides with the U-pick strawberry season. In addition to strawberries, customers can pick raspberries and blueberries in season.
Customers can choose from several summer CSA plans, including a box CSA that is delivered to four locations or a pick-up CSA available at the farm once a week. Some customers prefer the debit card CSA, which allows them to pay ahead and use the card to purchase whatever they want throughout the growing season. A fall CSA offers vegetables until Thanksgiving.
Anne realizes people have options about where they shop for plants and produce, and makes an effort to keep the greenhouse and market well-supplied with a variety of choices. “People drive past three or four big box stores to get here,” she said. “Our greenhouses are off the main road, but we’ve built a good enough reputation that people choose to come here.”
When it comes to predicting what people will want, Anne has found that many customers pay attention to what others grew last year, or get ideas from magazines. “Even more so, they see how things look when they come here,” she said. “Certain things might look better on a certain day. People might come looking for a specific thing, but change their minds once they get here. We have some unusual combinations, so we make sure that plants in the sample containers are available. We also have staff who can assist customers with plant choices.”
To better serve customers and offer more choices, the retail section of the Edgewater Farm farm stand was renovated a few years ago. The new building includes a commercial kitchen with at least two people working in there each day. “We try to use what’s in season,” said Anne as she described the busy kitchen. “We bake cookies, breads, scones and breakfast pastries, and make summer salads and seasonal favorites such as roasted vegetables, soups and apple crisp.” She added that the kitchen crew prepares food depending on the weather and what they predict people will want to eat that day. “If it’s pouring rain, we sell a lot of soup. On a hot day, we might sell cold soup. If lettuce looks beautiful, even on a cool day, people will buy it.”
After the farm stand closes in October, the Spragues hold group meetings with all employees to review the season. “We keep a list of everything we’ve purchased and planted, everything we’ve had to dump or what was an overplant,” said Anne. “What have customers asked for that we didn’t have, or what did we run out of? We have time to do inventory, cut back perennials and get them ready for winter and clean up all the greenhouses. We also order seed, plastic, rooted cuttings and perennials.”
Anne says the staff pays attention to trends and tries to anticipate what customers will want. But despite being seasoned growers, Anne says it’s hard to predict the upcoming season. “We try to,” she said. “People think they know what they want when they come here, but they might see something else they like better. We judge the best we can from our records. Peoples’ ideas about what they want change greatly.”
Ray recently purchased a 26-acre farm in Cornish, and Edgewater Farm rents that acreage from him. This property will ensure ample land for proper crop rotation as well as continued growth to meet local demand for fresh produce.
Edgewater Farm maintains an informative website that includes CSA information, crops and farming practices and links to blog posts. An embedded video link shows farm practices, describes the CSA and mentions the farm’s involvement in providing fresh produce to area food pantries through Willing Hands, a local non-profit organization.