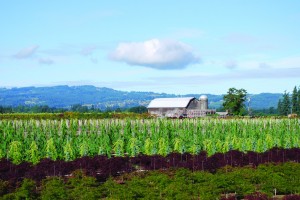 by Karl H. Kazaks
It seems like the most basic thing — watering. You’ve got to do it to grow the plants you need to sell to keep your business alive. It sustains not just your nursery stock but also your livelihood. You can’t afford not to do it.
But that doesn’t mean that it’s not worth examining your irrigation strategy. As with other resources and inputs, with irrigation you can find savings, create efficiencies, and be more profitable by striving to tailor your applications as precisely as possible.
Drip irrigation is one well-known way to gain some control of your water usage. But it’s suitable only in certain situations and for certain species. Eshraghi Nursery, a 250-acre operation on several farms in Oregon’s Willamette Valley, uses drip irrigation but its primary irrigation method is overhead sprinklers.
In the last few years, Eshraghi has been able to fine-tune their entire irrigation system by using variable frequency drives (VFDs) with its pumps.
VFDs act like a transmission or governor, controlling the speed of the pump. Without one, a pump will produce its rated flow and pressure based on its setting and size. Large pumps like those used at a nursery of Eshraghi’s size produce a substantial amount of flow and pressure.
But every operation has variations in the amount of water it needs. In the same way that you don’t always need the full capacity of your car’s engine, you don’t always need to run your pump full bore. But without a VFD you have to: the pump is either off or on. And when it is on, you’ll get the full amount of water it produces — whether you need it all or not. This means you’ve got to put that water somewhere, which could lead to overwatering. If you’re overwatering, you’re not only spending excess energy running your pump and spraying water which could be held in reserve, you could also be causing stress to your plants.
At Eshraghi, production planning prior to the installation of the VFDs included putting plants with similar water needs side-by-side. Yet the nursery also sites plant populations based on other inputs as well. Keeping all those factors aligned, said farm manager Chris Lee, is “a true challenge.”
VFDs monitor the pressure in water lines and the discharge of the pump, gearing down the pump when pressure in the lines starts to build. VFDs also help to slowly start and stop the pumps as they cycle on and off, which helps preserve the system’s lifespan.
When an irrigation system uses multiple pumps — and if all the lines are connected — one VFD is usually all that’s needed. As water requirements increase, the VFD will call for more water from its host pump. As the need for additional pumps arises, they will come on at full power and the pump with the VFD will modulate to compensate for total water requirements.
Eshraghi irrigates from ponds, the Tualatin River, and a number of wells. They have installed VFDs on two 50 hp turbine well pumps, as well as a smaller pump that supplies their main office building. Their irrigation lines are interconnected, so when the pond and river pumps are active they are part of the VFD-controlled system.
It is possible to install VFDs to pumps that draw from surface water sources, but Eshraghi winterizes the pumps it uses in ponds and the river, so putting the VFDs on wells gives them year-round functionality (as well as an enclosed space for housing the system).
What’s more, a VFD can be very valuable in winter, as irrigation needs are so different than in warmer months. At Eshraghi, for example, they are able to finesse how they water their dormant woody ornamentals, while still adequately watering plants growing under plastic. At the same time, they will be able to use the same system to provide more water in the growing months, like those that have now descended on the Willamette Valley.
Eshraghi grows Japanese maples, grafted conifers, and woody ornamental stock, including both English and American boxwood. They make topiaries — primarily tiers, pom-poms and spirals — from junipers, Alberta spruce, arborvitae, Pinus and Buxus.
The nursery does have some plastic greenhouses, used mainly for grafting and propagation. The “houses” are covered only during part of the year, part of Eshraghi’s goal to grow plants which — long exposed to natural elements — will be primed for the end consumer.
Eshraghi did receive financial assistance to install the VFDs — both tax credits and incentive funds from the Energy Trust of Oregon. Even so, without such assistance installing a VFD can be cost-effective, depending on the size and circumstances of your operation.
Lee did point out although VFDs are designed to save energy overall, when a pump is operating at full discharge it is actually consuming more energy than a conventional pump, as the VFD’s computer is also being powered.
Lee recommends any operation interested in VFDs talk to their pump service. “There are lots of technologies available to growers,” he said, “and it is hard to say what is right for us is the correct choice for everybody.”
Eshraghi is involved in a partnership between the Oregon Association of Nurseries and the Oregon Environmental Council called the Climate Friendly Nurseries Project (CFNP). According to its website, the CFNP’s central goal is to help nurseries reduce energy and resource inputs while limiting greenhouse gas emissions and “achieving greater economic efficiency and profitability.”
Participating in the CFNP, said Lee, has helped Eshraghi “to see how efficient our operation is.” Project audits found the nursery was already “pretty efficient.” The nursery uses conservation practices such as using cover crops, catching run-off, and recycling plastics.
VFDs have become an important part of Eshraghi’s management scheme, but Lee noted that each nursery is unique.
The good news is that most of the steps which can be done to reduce inputs also create better plants — which at Eshraghi, Lee said, “Our number one goal.”