Everything apple at Blue Heron Orchard 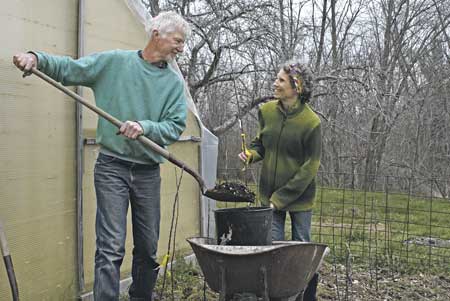 When Daniel Kelly discovered a small, abandoned orchard in northeast Missouri, he didn’t know anything about growing apples. He offered to maintain the orchard and produce an organic crop, and the owner would get the crop. Daniel said he referred to a book to learn how to operate the orchard, which produced well under his care.

The experience led Daniel and his wife, Cherie Sampson, to the decision that they wanted their own orchard. Daniel approached his landlord about purchasing some eroded land, but the landlord didn’t want to sell that portion because it provided access to the rest of the property. However, the landlord was willing to sell Daniel a different piece of property, which turned out to be better than the land he originally wanted. With a cost-share project through the soil conservation service, Daniel constructed a pond for irrigation and started planning his orchard.

Daniel knew he wanted to produce organic fruit, but there was limited information on organic fruit production at the time. Without the benefit of the internet as a resource, he started with about 500 trees. “I chose what liked and what I thought I had to have, like Red Delicious,” he said. “I also selected according to ripening in case I had to pick them all myself.” Blue Heron Orchard is certified organic through the Iowa Department of Agriculture and Land Stewardship, or IDALS.

Since he didn’t have a lot to invest in the initial orchard, Daniel selected semi-dwarf trees that would mature quickly. “At the time, I could purchase trees for about 5 dollars each, and plant about 100 per acre,” he said. “Or I could buy 400 trees per acre and spend five times the money. I didn’t have enough cultural knowledge at the time to go forward with that.” After reading and experimenting with different varieties, Daniel and Cherie now grow about 12 apple varieties. The harvest starts with Gala and ends with Winesap.

Apples are sold directly from the farm and at farmers markets in St. Louis. “We do some wholesaling to grocery stores in Columbia, Missouri and also some restaurants in Quincy, Illinois,” said Daniel. “We also provide apples to a CSA in St. Louis.” Blue Heron Orchard’s location makes it inconvenient for U-Pick, but Daniel will arrange U-Pick upon request.

One of the first value-added products Daniel and Cheri wanted to make was cider, but that decision came when incidences of E. coli in cider were occurring. “Missouri has a law that says we can sell unpasteurized cider to the end user, like at farmers markets, but I can’t wholesale it,” said Daniel. “Then through experimentation and making apple butter and applesauce, we learned how to boil our cider down to make a thick sauce. We call it Pomona’s Ambrosia — it’ s a syrup with no sugar added.” Daniel added that the sauce has a sweet-tart flavor and can be used as a dessert topping, a salad dressing or for grilling.

“We boil about 40 gallons of cider at a time, and reduce it to about six gallons of syrup,” said Daniel, describing the process. “We also use apple cider to steam our applesauce and apple butter. For applesauce, we crush the apples, then steam the apples in apple cider, then run that through a food mill. Then we take the drippings leftover from the steaming process and boil it down to make the syrup. That’s the sweetener we add to the applesauce or apple butter. It’s sweeter, and since we cook our apples longer and incorporate apple cider into it, it tends to caramelize a little bit and gives it a darker color.”

The state-inspected, value-added processing facility at Blue Heron Orchard includes a cider room and a separate kitchen with steam kettles, ovens, refrigeration and a pantry. Daniel used a USDA value-added producer grant to develop value-added products that incorporated certified organic fruit. “We make a fruit leather, which we call apple jerk,” he said. “We use our applesauce, which is apples and cider, and use a food dehydrator. We make an 11-inch square sheet, dry it and roll it up.”

Another popular value-added item is Blue Heron’s Applewood Smoked, Fire-roasted Jalapeño Peppers. Daniel and Cheri grow all the vegetables used in their value-added products in a large garden and two high tunnels. “We grow about 20 varieties of heirloom tomatoes,” said Daniel, “then sun-dry them in our greenhouse.”

Daniel and Cherie use the smaller high tunnel, which has an extra layer of plastic, for both growing and sun-drying tomatoes. “We layer the floor with black plastic to solarize the soil, then close the doors,” he explained, adding that the temperature reaches 130 degrees. “We hang olive-oiled screens, then slice tomatoes about 3/8 inch thick and put a little sea salt on them. We put them on the screens, turn them once, and in two days we have sun-dried tomatoes.”

Over the past 10 years, Daniel has worked on creating a unique popcorn, and this year, a seed company in Vermont is trialing it. “It’s a four-color popcorn that has a good-size ear, about 7 to 8 inches,” he said. “It’s a beautiful popcorn.” He started by planting yellow and blue popcorn, which cross-pollinated. Then he grew four colors — two antique varieties and one each of the yellow and blue. The following year he didn’t grow any, but in his compost pile, there was one stalk of popcorn that grew, and in fall, Daniel discovered the ears had four colors. He popped some kernels, and since they all popped and tasted good, he planted the rest to grow it out.

All crops, except popcorn, are started in flats. Blue Heron Orchard grows Asian greens both in the tunnel and in the field, depending on the year. “The point of solarizing the soil in summer is because it gets so hot that it kills weed seeds and seeds that are in the soil surface area,” said Daniel. “After we do the sun-ripened tomatoes, we can go in late summer/early fall, remove the cover and start crops and grow them out in the greenhouse for several months, then put the cover back on in late November/early December. Then we can run it as a greenhouse.”

Daniel said most of his projects begin as experiments, the including fire-roasted peppers. He started roasting peppers on a grill followed by dousing them in a bucket with a damp cloth to steam them before removing the skins. He has since purchased a pepper roaster from New Mexico. “I save apple wood, soak it in water, start the fire with charcoal then add the apple wood,” he said. “I can do a bushel of peppers in about 45 minutes. The peppers are peeled, soaked in vinegar and canned with garlic, cilantro and parsley.”

Daniel is currently the president of the Upper Midwest Organic Fruit Growers Association. He explained that the organization used to be primarily for tree fruit, but has expanded to include other fruits. “Our organization is dedicated to education,” he said. “We have field days, grafting workshops and retreats.”