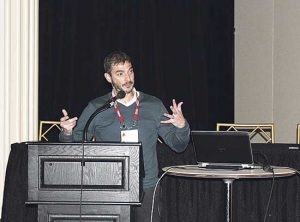 by Deborah Jeanne Sergeant
Managing Spotted wing Drosophila doesn’t have to mean applying insecticide every week; in fact, Miguel Gomez, PhD, believes that other methods can work as well or better.
Gomez, an associate professor at Charles H. Dyson School of Applied Economics and Management at Cornell Business School, is a faculty fellow at the Atkinson Center for a Sustainable Future. He presented “SWD Management and Impact on Profits” at the Empire State Producers Expo recently.
According to Pest Tracker, Spotted wing Drosophila, an invasive fruit fly, was first sighted in New York in 2011. Cornell researchers predict that unless farmers protect their crops, New York could lose $7 million worth of vulnerable fruit annually. Nationwide, the figure reaches $718 million in losses of produce and labor expenses.
“It attacks healthy, ripening fruit while other flies only lay eggs on past ripe or rotting fruit,” Gomez said.
Since SWD can complete 13 to 16 generations per year, it’s clear how quickly the pest can proliferate.
According to Cornell researchers, certain susceptible fruits like raspberries can suffer infestation as high as 100 percent throughout the season if farmers take no precautions against SWD. Blueberries can experience losses ranging from 30 to 50 percent.
Growers using integrated pest management (IPM) minimize their insecticide use. But with SWD, if you do nothing at all “your yield will decline,” Gomez said.
He added that monitoring crops for SWD is costly and not always effective since many workers use imperfect observation methods, use monitoring traps with low efficiency levels and don’t always correctly identify SWD from other fruit flies.
When considering the performance of alternative SWD management strategies, operators need to consider which strategies will help minimize losses due to SWD.
“What threshold — the number of SWD caught in traps — should be employed, so that monitoring strategies are superior to insecticide spray-only strategies?” Gomez said.
He advises producers to monitor to initiate a spray strategy by starting weekly at the beginning of the season and then start spraying only after the number of SWD caught by traps reaches a predetermined threshold.
Afterwards, spraying weekly and monitoring can help keep the numbers down. But if the number of SWD caught by traps is under the threshold in a given week, do not spray.
He compared the relative total cost of initiate strategies versus baseline strategy.
“There is very little gains,” Gomez said. “As trapping efficiencies increase, it is better than just applying insecticide. The cost is roughly equal with the current efficiency of the trap.”
He said that growers can choose more liberal action thresholds when using monitoring traps with higher efficiency.
“If we are able to make traps a little more reliable, than we can really say that combining monitoring and spraying is better than just the current practice of just spraying throughout the season.”
Only spraying without trapping and monitoring may take care of SWD quickly; however, the costs are high both in the short-term and the long run, according to Gomez. He said that using traps “is more sustainable. If we continue using insecticides, the probability that the SWD will become resistant to spray applications is higher.”
As the efficiency of the trap improves, “there’s no reason to spray,” Gomez said. “The input you will have depends on your own situation.”
“The economic impact of different SWD control strategy depends upon efficacy of insecticide and efficiency of monitoring traps and the action threshold selected,” Gomez added.
Cornell University College of Agriculture and Life Sciences Cornell Cooperative Extension posted directions at www.fruit.cornell.edu on how to make traps for Spotted wing Drosophila. The site states that the homemade whole wheat dough and apple cider vinegar trap “compares favorably to commercially available traps and lures” although other pests may be caught in the trap, too.
Cornell researchers have tracked Spotted wing Drosophila numbers since 2012 by tallying the input from volunteer farmers reporting from Albany, Cayuga, Clinton, Dutchess, Erie, Essex, Genesee, Herkimer, Livingston, Niagara, Onondaga, Ontario, Orange, Orleans, Rensselaer, Saratoga, Schuyler, Seneca, Steuben, Suffolk, Tioga, Ulster, Washington, Wayne, Wyoming, and Yates counties.