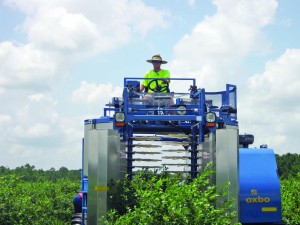 by Sally Colby
The 265-acre farm Jeff and Nonie Morris purchased in 2004 included about 40 acres of well-established blueberry bushes, but the Morrises, who had no previous experience growing blueberries, decided to start from scratch.
“It took a lot of work,” said Nonie, explaining that Jeff cleared the existing bushes to make sure the Pender County, North Carolina farm was free of disease and other potential problems. “Jeff did a lot of research to make sure he was planting properly and installing irrigation correctly. He has had a lot of help from North Carolina State University at both Wilmington and Raleigh.”
The Morrises named the farm Carol Sue Blueberry Farm after Jeff’s mother, Carol Sue, because they wanted a family name with friendly, country appeal. By 2010, the farm was producing berries again, and in addition to the 80 acres of commercial blueberries, the Morrises also have a separate U-pick operation. The U-pick is in Hampstead, and includes several acres of blueberry bushes and one-half acre of Camerosa strawberries. “We provide containers or customers can bring their own container,” said Nonie as she described how they manage the U-pick aspect. “We sell them by the pound.”
Customers who prefer to purchase freshly picked berries can stop in for pints or quarts. Carol Sue customers can also purchase strawberry plants and blueberry bushes. “People like to try growing their own blueberries,” said Nonie. “They make a beautiful shrub. They have leaves throughout the year, and the Legacy turn turns bright red in winter.
Varieties on the commercial segment of the farm include early bearers Rebel and Star, followed by O’Neal, Duke and New Hanover. The Legacy variety comes toward the end of the season. The New Hanover cultivar was developed at North Carolina Sate University and released in 2007.
To harvest the commercial portion of the farm, the Morrises start with at least two, and preferably three hand pickings. “We’ll start out with about 40 pickers, but when those berries are coming fast, the contractors bring more workers,” said Nonie. “It’s such a short season, so they want to pick as much as they can. At peak production, we have about 100 workers picking.” After the final hand-picking, the Morrises use a commercial harvester to pick the remaining berries. Berries are sold through a local buyer.
Pest and disease issues are managed through scouting and immediate attention to problems. This year, the Morrises will be watching for the appearance of Spotted Wing Drosophila (SWD). “We’ve been using the prevention program recommended by North Carolina State,” said Nonie. “But we haven’t seen SWD here yet.” After picking is finished in July and August, bushes are pruned, and after harvest and throughout the winter, Jeff removes root suckers.
After what she describes as an unusual winter, Nonie expects strawberries will be ready early and be available through early June. Blueberries should be ready in mid-May. Nonie has always invited customers to share recipes at the U-pick stand, but this year, she plans to hold a recipe contest. “People make jams, pies and smoothies, and they freeze the berries too,” she said. “It’s nice when we learn what they’re using them for.” An added attraction at the U-pick location is ice cream. “They come in from picking, and can have ice cream. It’s a good family outing for families.”
Although Carol Sue Blueberry Farm has gained a loyal following, Nonie advertises in the local newspaper and posts regularly on the farm’s Facebook page. “The farm’s location on the main highway is great advertisement itself,” said Nonie. “For Facebook, I take pictures of what’s happening on the farm — blueberry bushes with ice on them, what the plants look like during overhead irrigation frost protection. When strawberries are ripe, I put a big picture of a ripe strawberry on Facebook.” Nonie says that people love seeing posts on Facebook, and it’s a great tool for keeping in touch with customers.
All three of Jeff and Nonie’s children have worked on the farm as they grew up, and their youngest son Patrick, a junior in college, still helps on the farm when he’s home in summer. “What’s neat about the kids working with us when they were young is that they really appreciate the work their father has done,” said Nonie. “They also appreciate the dedication of the workers who come in to pick.”
Visit Carol Sue Blueberry Farm on Facebook, or on their web page at www.carolsuefarms.com.