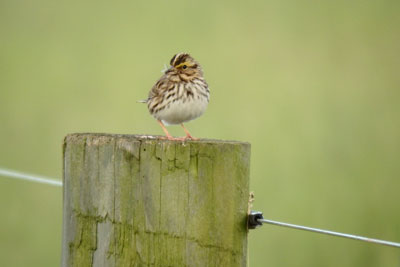 Farmers are often focused on ridding their farms of pest birds. Auditory and visual bird deterrents and exclusionary bird netting are utilized in an attempt to stop pest birds from damaging crops. Some farmers hire falconers to patrol orchards, vineyards and cropland as harvest time approaches.

Another option is to encourage predatory birds yourself. Kestrels, barn owls, great horned owls and other raptors can be lured to the farm by providing perches or nesting boxes which are species-appropriate. These allow the birds to patrol the fields or orchards for a steady diet of rodents – also damaging to crops – and deterring pest birds.

Birds of prey can play a positive role on the farm, but so can other beneficial birds. This often-overlooked fact is important both for farmers and for bird species.

“Different birds on the farm will reduce different types of crop pests,” Sacha Heath, of the Living Earth Collaborative, said. “And, importantly, very few bird species themselves are pests.”

Birds have a wide range of foraging patterns. Some species, such as swallows and warblers, are aerial foragers, eating flying insects. By reducing the number of adult insect pests, these birds also greatly reduce the eggs which can be laid on crops, and the resulting damaging insect larvae. Others, such as woodpeckers and nuthatches, eat caterpillar larvae from the barks of trees, reducing these crop-damaging pest populations. Still others forage on the ground, like sparrows or junco, eating seeds and grubs during the winter months, decreasing future pest populations.

But birds don’t always forage in the same ways all the time. Their habits may change with the seasons or with their lifecycles. Some are migratory, only present for part of the year. Some can be beneficial to crops during one season, but pose problems when a crop reaches maturity.

Studies done on farms by Sara Kross of Columbia University show that “the majority of birds in summer breeding season were insectivores and omnivores” and not frugivores, which prefer fruit, or granivores, who feed on seeds, Heath said. “This can help farmers reduce a diversity of pests in a diversity of crops.”

Overall, about 65% of birds present on farms during their non-breeding season are omnivores and insectivores, compared to 90% who fall into this category during the summer. Numerous studies show that simply increasing the diversity of birds present on the farm can decrease pest levels in crops, and sometimes increase crop yields too.

“There is a perception, perhaps, that all birds cause damage, when in reality only a few species cause damage,” Heath said. “Science is moving in the direction of measuring both the costs and the benefits of the birds to determine the net outcome of attracting birds to farms. We recognize that farms are complex systems. It can only benefit the farmer and the birds if we try to understand, and manage, for these complexities.”

Even when other beneficial insects are present to keep pests at bay, attracting birds can enhance pest protection. In a study on hops, bird exclusion from the crop was shown to increase pest larval survival. The study also showed that invertebrate pests can keep the pest damage to the crop under control, and the invertebrates were seen to be more beneficial than birds overall in reducing pest damage.

In broccoli, a combination of birds and spiders were able to keep crop-damaging pests to a minimum. A study looking at corn determined that the presence of birds decreased weevil and cutworm populations, but didn’t increase crop yields. In apple orchards in Europe, the natural population of the great tit (a cousin of the North American chickadee) was increased by strategically placed bird boxes. Increasing the population resulted in a 12% decrease in caterpillar damage, along with an increase in apple yield per tree.

Agriculture is the number one threat to bird populations worldwide. An ongoing concern globally is the decline in habitat used by many bird species. As deciduous forests, grasslands and scrublands declined dramatically in the past four decades, the percentage of open land used as cropland has increased to 38%. However, wetlands conservation efforts over the past decades have slightly increased the population of waterfowl. With some birds relocating to cropland as their habitat disappears, conservation efforts on farms may help to stop declining bird numbers.

“Because of the fact that birds are utilizing farmland, we see farmers as having a potentially large impact on the conservation of bird species,” Heath said.

Increasing the diversity of habitat found on farms can attract beneficial birds and help stabilize populations. For example, said Heath, there are 25,000 miles of ditches and canals on agricultural land in central parts of California. These could be planted to willows and other woody shrubs, habitat which many bird species require. Hedgerows, either at field edges or used to divide up large fields into smaller areas, can increase pollinator and beneficial insect populations.

The potential for these diverse areas to attract beneficial birds is being studied. Increasing hedgerow widths and heights attracts a greater number of birds and a larger diversity of species. Planting a more diverse hedgerow has the same effect on breeding species and the number of breeding pairs of birds. As the complexity of an edge habitat grows, more bird species are attracted to it, Heath said.

In a California study, researcher Kross determined that insect pest damage as well as a resulting decrease in crop yield both lessened as marginal land diversity increased. Other studies have shown that strawberry-eating birds decreased as marginal lands were increased in diversity and attracted more diverse bird populations. Birds have also been found to target pest insects, not beneficial ones.

Ninety percent of studies conducted regarding the impact of birds on farms show that birds are beneficial in ag settings, Jo Ann Baumgartner of the Wild Farm Alliance said. Several NRCS programs will support farmers who are increasing habitat diversity via riparian or hedgerow plantings, building predatory bird perches or otherwise increasing diversity on farm.

Baumgartner warned against the use of rodenticides and neonicotinoid-treated seeds, both of which are harmful to birds. Adding a water source and planting sunflowers for songbirds are other ways to increase bird presence on the farm and decrease pest pressures in crops.

“Birds are important for pest control in many ways. Farmers have a lot of opportunity to support birds, and also benefit from them,” Baumgartner said.