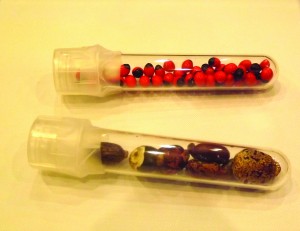 by Kelly Gallagher
Attendees of Cultivate ‘14 saw countless booths displaying a vast array of plants and featuring some of the latest developments in horticulture products and accessories. But upstairs, on the Retail Terrace, one booth stood out from the crowd – one bearing the bold, blue emblem of the Federal Bureau of Investigation.

What could the FBI possibly have to do with greenhouses and garden centers? More than you might think, according to Supervisory Special Agent Nathan E. Head, Ph.D., of the Biological Countermeasures Unit, one of the agents who manned the booth. Head was there to inform vendors who sell plant material at their establishments that illegal activity could start in an unsuspecting place – their inventory.
The FBI’s main objective at Cultivate ‘14, Head said, was to educate those in the horticulture industry about plant material that could be used for non-peaceful purposes, particularly the castor bean seed. From these seeds, it is possible to extract ricin, a powerful naturally occurring poison. In 2013 alone, three cases concerning the use of ricin went to court. Two defendants were convicted and sentenced to lengthy prison terms. One case is still pending.
“People may use castor bean seeds to do research, fend off pests from their gardens or for creative purposes,” said Head as he handled a small vial of the tan and brown-speckled seeds. “But there really is no peaceful reason to extract ricin. And because of the Internet and television shows such as Breaking Bad, more and more people are aware that this poison exists. Directions on how to extract it from the seed are easy to come by.”
The dawn of the Information Age and recent television trends aren’t entirely to blame, though. Georgi Markov, a Bulgarian writer and dissident, was assassinated with ricin back in 1978. The fatal dose was administered via a projectile launched from the tip of an umbrella. He died four days later.
Head encourages retailers to understand as much as they can about any plant material they sell that could be used for nefarious purposes. The more facts they know about these plants, such as their ideal growing conditions and growing seasons, the more easily they may be able to detect a suspicious purchase. While there may be a peaceful reason for a person to purchase and possess castor bean seeds, a retailer might question why, for example, a customer is purchasing the store’s entire supply during the plant’s off-season.
Ricin is not typically used to harm a large group of people. Rather, ricin attacks are generally very targeted in nature. The amount needed to achieve a fatal result for the victim varies widely, depending on an individual’s physiology and the manner in which the person is exposed to the poison. There is no antidote to treat ricin.
“It’s not illegal to possess castor bean seeds,” said Head. “But it is illegal to extract ricin from them. We want to educate garden retailers so they know that this activity occurs.”
While ricin is getting a lot of attention thanks to infamous cases and recent media trends, castor bean seeds are not the only product that could pose a threat if misused. The FBI brought another vial to Cultivate ‘14 to demonstrate plant material that could be used to harm others — this one containing Abrus precatorius seeds, commonly known as jequirity, crab’s eye or rosary pea. These brilliant red seeds are native to tropical climates and contain the toxic substance abrin. In the past, the aptly named seeds were very frequently strung together to create rosaries and other jewelry — despite the deaths that occurred when unfortunate artisans pricked his or her fingers with the deadly poison.
The two vials of seeds make a cheerful, festive sound when shaken inside the clear plastic vials. They seem perfectly innocent. One might never guess that they contain a toxic substance. But the more people who understand these and similar plants, the more prepared the general public is to prevent a potential attack.
At first, it seemed strange to see the FBI at a trade show intended for members of the horticulture industry. Doubtless, it was this perception that drew many curious people to the booth. But after one had learned about the FBI’s message and mission, it became clear that the booth fit right in.