Feeding a nation of growers, container by container 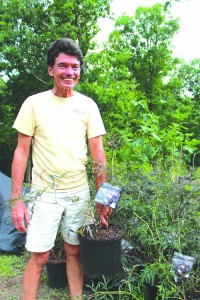 by Karl H. Kazaks
AFTON, VA — A retail nursery supplying perennial plants, bushes and trees to buyers across the nation, Edible Landscaping has in the past quarter century seen a transformation in how it reaches its customer base.
“We built this place on mail-order,” said the nursery’s founder and owner Michael McConkey.
Today, though, Edible Landscaping hardly uses paper catalogs at all. “We really rely on the Internet,” McConkey said.
The nursery’s location near I-64 and within the I-81 corridor also allows the nursery to have more walk-up customers than would be expected from the surrounding communities. Being located near the interstates allows the nursery to attract customers who are traveling through central Virginia.
Edible Landscaping has distinguished itself in a number of ways. Foremost is its specialization — as the name indicates — in raising plants that can in some way contribute to the human diet. The nursery also uses organic production methods, and was a pioneer in shipping potted plants.
“At one time we were the only company shipping in pots,” McConkey said.
Shipping in pots allows Edible Landscaping to extend its shipping season throughout the summer months. The nursery ships material in pots ranging from 2 inches to 5 gallons. It will send larger stock via freight.
Edible Landscaping has a large selection of figs and persimmons, and has also developed lines of potted asparagus and strawberries which have proven quite popular. It also grows a number of tropical species — including dragon fruit and a variety of citrus — which its northern customers use for indoor cultivation.
Though the nursery does have continual, year-round business, like other nurseries the spring planting season is the busiest time at Edible Landscaping. Though the nursery has and does ship nationwide, the bulk of its sales come from Virginia and nearby states, particularly Maryland, Pennsylvania and New York.
As part of its organic pest control strategy, the nursery uses ducks, which prey on slugs and the larvae of Japanese beetles. They also spray kaolin clay on grapevines and rosaceous fruit trees.
Being organic, McConkey said, requires “an incredible amount of labor.” To help keep with the demand for labor, he recently implemented volunteer work days at his nursery.
The work days, which are planned for the second Tuesday of each month, give McConkey a supply of workers in addition to his regular crew. The volunteers receive a $10 per hour credit for the purchase of plants.
The nursery propagates its stock through a variety of methods, depending on what’s most appropriate for the species — division, grafting, cutting or from seed or potted or bare root stock. The nursery also has its own orchard, which not only provides food but also serves as a showcase for the products the nursery grows.
The nursery’s website has a map of the orchard. “We thought it would draw more people here,” McConkey said. “It has.”
Visitors like to tour the orchard to get a feel how the plants they’re considering for purchase will look like in their landscape, and to learn about how to care for the plants. “It’s fun and it’s educational.”
The same could be said for the regular open houses McConkey has on his nursery. Every fall, he hosts a persimmon day and a fall fruit day. The idea is to get customers out to the orchard during picking seasson, so they can taste the fruit of what they’re thinking of planting around their homes.
The nursery is located midway down the side of a mountain, which helps to temper the weather. “We don’t tend to get late spring frosts,” McConkey said, though this past winter was the hardest in 20 years.
Because McConkey has been in business for so many years, he’s well known among hobbyists and professional growers. Many small farms and CSAs throughout the mid-Atlantic know and have purchased from McConkey. It helps that he has a robust inventory on hand.
Customers have helped McConkey to broaden the scope of his inventory. “So much of what we grow,” he said, “we grow because someone suggested it.”
With much of his business done through Internet orders, that means a lot of time spent on packing and shipping. But McConkey doesn’t mind.
“We’re try our best to make the world a smaller place.”