Focusing on the unique at Threefold Farm 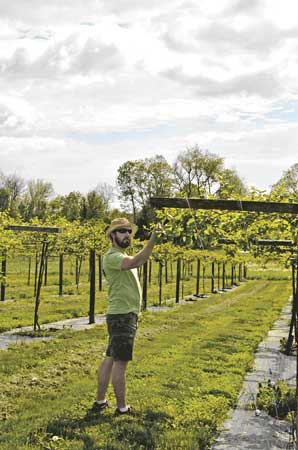 When Tim and Katherine Clymer constructed a gothic arch high tunnel, they had a unique purpose in mind: to grow figs under cover.

Tim has always had an interest in unusual fruits, so when he and his wife Katherine had an opportunity to purchase a farm large enough to pursue this interest and make it a vocation, they took the farming plunge.

After purchasing their Mechanicsburg, PA farm in 2014, Tim immediately started planting fruit trees. “We knew we wanted to specialize in unusual fruits because there are plenty of folks growing apples, peaches and other fruits well,” said Tim. “We have brambles, a small plot of blueberries, kiwi berries, paw paws, figs, persimmons and jujubes.”

Tim believes the climate battery high tunnel constructed this past November will be instrumental in successfully growing figs in the Northeast. “I’ve always wanted to grow figs,” he said. “They’re more of a zone 8 plant and experience damage at around 10 or so degrees, so we wanted to trying growing figs indoors.”

Heating the high tunnel was a critical issue. Tim considered a conventional propane heater to maintain a suitable temperature, but he didn’t want to use fuel just for figs. He learned about a system that harnesses heat from the sun that had the potential to work well. “Instead of venting excess heat, you actually pump it underground,” Tim said, explaining the climate battery system. “There are three 24” vertical risers on each side that connect to a horizontal 18” manifold that goes across. They’re about four to eight feet underground, and from one manifold to one that runs the other way there’s 4” corrugated, perforated drain tile.”

A blog entry on Threefold Farm website explains how the climate battery greenhouse works: The concept is that the earth beneath the structure is used as a ‘battery’, or thermal mass, for storing excess heat generated by the structure. Greenhouses in most climates generate more heat than they can immediately use. In this system, excess heat is transferred to the floor beneath the greenhouse where it is stored for later use. The storage and transfer of the heat is accomplished by burying corrugated, perforated tubing beneath the greenhouse and running a fan to push air through the tubing. During the day, warm, moist air is pushed underground where it condenses and releases heat, coming out the other end cooled and possibly at lower humidity. At night, if heating is needed, fans push colder air underground to pick up stored heat.

Last winter, Tim tracked temperatures in the tubing, throughout other areas of the structure as well as ground temperatures. “On the coldest nights when it was zero outside, we could maintain 20 degrees,” he said. “With some better air sealing and a better energy curtain, we could keep it a little warmer.”

Tim says erecting the structure was somewhat like building a house, with a deep foundation necessary for the extensive tubing. The structure has high roll up sides, and the end doors open for cooling. Once the high tunnel was complete, Tim added mushroom soil and wood chips to reestablish organic matter. In addition to fig trees, Katherine takes advantage of the season extension it offers and grows peppers and tomatoes.

Fans help manage diseases such as powdery mildew on solanaceous crops. One potential problem with figs is fig rust, but the farm is far enough north that the disease doesn’t overwinter there. The Clymers are growing about six varieties of figs, with six of each variety, both early and late season. In addition to the figs in the high tunnel, Tim grows an acre of figs outdoors, all of which bear without pollination.

There’s no wind buffer to protect the structure, so it wasn’t unusual for 50 mph winds to hit it. Tim added a row cover this past winter to see if it would offer the trees more protection. Although trees still died back, they had a two to three week head start over the unprotected trees.

“That knocked our outside (fig) trees to the ground,” said Tim, commenting on the two-week stretch of extreme cold. “Now they’re recovering. The good thing about figs is that they fruit on new wood, unlike most fruit trees that have to overwinter buds to flower the following year. Most varieties we grow can die to the ground, spring back up and still fruit that year.”

Although figs have the potential to grow quite tall, Tim plans to train them in a Japanese espalier. “We’ll train them with permanent cordons along the ground, then they’ll break bud all along the stem and shoot up on verticals,” he said. “Those are the fruiting wood for the year. Then we’ll cut them back to stubs at the end of the season to get new branching next year. The goal to keep them at 6’ to 7’.”

In keeping with his theme of growing unusual fruit, Tim planted a stand of paw paws. Because they sell better at market, he selected eight named grafted varieties, 20 of each, including Shenandoah™, Susquehanna™, Potomac™, Sunflower and NC-1.

“Paw paws are the largest native fruit,” said Tim, adding that they’re notoriously difficult to establish. “They put on weird, maroon upside down flowers that are pollinated mostly by flies. One mistake we made when planting these was not getting the grass established here (between rows). I went with 3’ wide plastic to save money, but I should have gone the width of the tree to cut down on mowing. We’re going to add more plastic on each side.”

Over an acre of brambles of various varieties thrive at Threefold Farm, and provide the most revenue. Tim says he decided on wider spacing and black plastic to manage weeds in the brambles. “Blackberries have runners, so if we didn’t have plastic down, we’d have shoots coming up all over the place,” he said. “The plastic helps create proper spacing and promotes good air circulation. We went wide with the trellising – the top arm is 5’ and the lower is 3’ to allow light and air to move.”

Kiwi berries, a small, grape-sized fruit, were planted at the same time as the berries. Most are female plants, with males strategically placed for pollination. The plants grow quickly so they’re staked for the several first years until vines can support their own weight. “They grow like crazy in summer,” said Tim. “Each shoot can grow 30 feet in a season, so most of our time is spent keeping them at bay. They taste like kiwis but a lot sweeter.”

Fruit grown at Threefold Farm is sold in several ways: U-pick, a roadside stand and wholesale to area restaurants and a food hub. But do people stop at a stand to purchase lesser-known fruits? Tim says his family was away during the peak of fig season last year, and learned they were getting calls from people minutes before the stand opened. “The person watching the house for us said there was a line at the stand and they sold out within five minutes of opening,” said Katherine. “Certain ethnic groups are especially interested in them. Restaurants are buying figs from California weekly, so with growing them here, they’re picked at the peak of ripeness and we can deliver a perfect product every week.”

Learn more about Threefold Farm and the climate battery high tunnel at www.threefoldfarm.org.