Following the family path to Rhoads 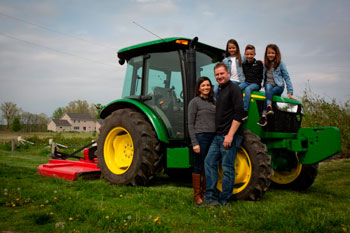 Brett and Tara Rhoads, along with their children, are the latest generations to work on the family farm in Circileville, Ohio.

Be fruitful and multiply. Biblically, it meant Adam and Eve were to be productive and have children. Literally, it could also be taken for the early business plan for the Rhoads family business.

It started with one young boy named Brent Rhoads selling an abundance of fruits and vegetables. As his operation grew and prospered, it eventually multiplied into two successful businesses.

“My dad was just eight years old,” explained Brett Rhoads of Rhoads Farm Inc., located 25 miles south of Columbus, Ohio, in the city of Circleville. “It was 1958, and he was right here in Circleville. He got his start reselling surplus produce from his parents’ farm at a little farm stand he built himself. The farm stand eventually sold eggs, cheeses and meats. Our office today is right next to where that farm stand used to be.”

Brett grew up working in the family business. He earned his degree in horticulture and crop sciences at Ohio State University. His sister Carly Neff studied business at Ohio State. The two siblings each took over a portion of the business as it split in 2012. Brett and his wife Tara run Rhoads Farm Inc., which includes a tree nursery and the growing of fruits and vegetables. Carly and her husband Jeremy oversee Rhoads Garden Center, which functions as the retail operation of the Rhoads clan.

“A lot of farms do sell retail on site, but our retail business had done well enough to justify it becoming its own operation,” Brett said. The garden center features, fruits, vegetables, trees, beer and wine and is located next door to the Rhoads family farm.

The farm has grown considerably over the years. According to Brett, “The farm is just over 600 acres now. Our wholesale nursery takes up 175 acres, and over 200 acres are used for growing our produce…most of the rest of the land is dedicated to growing corn.” 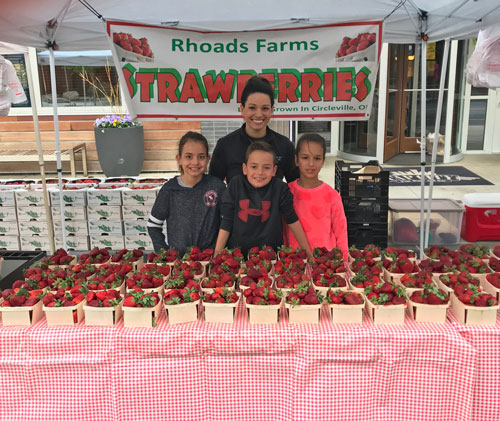 The nursery produces over 60 different varieties of tree, with the best sellers being maples and oaks. Trees from Rhoads Farm are shipped as far east as Boston and to Wisconsin in the west. The success of the nursery has rapidly propelled the farm’s revenues ever higher. “About 70% of our annual sales come from the nursery,” Brett noted. The nursery has two main seasons; the first runs from March 1 to April 30, and the second lasts from Oct. 15 to Dec. 15.

In between the nursery’s two main seasons, the focus at Rhoads Farm is on the fruits and vegetables, which have a growing season from May 1 through Labor Day. Rhoads’ produce is sold in a number of retail chains, including Walmart, Kroger and Meijer. Asked what’s most popular, Brett doesn’t hesitate to say, “Blackberries. Our blackberries sell very well. In fact, there are some seasons when blackberry sales can account for up to 80% of our produce sales.” Rhoads’ blackberries are featured front and center at Rhoads Garden Center.

In order to keep up with the great labor demands of the farm, Rhoads Farm has capitalized on the federal H-2A program to fill temporary agricultural jobs. “It’s been great for us,” said Brett. “At our peak, we have over 50 laborers – usually about 15 at the nursery and the rest helping with the veggies. We have 54 beds here for migrant workers, mostly from Mexico.”

Looking ahead, Rhoads Farm is looking to expand its tree nursery operation. And Brett is already bringing in the third generation of the Rhoads family. His nine-year-old triplets, Sophia, Lillian and Calyx, are already experienced hands at selling fruits at local farmers markets. “They got a late start,” joked Brett. “They got their start at nine, a whole year later than their grandfather!”