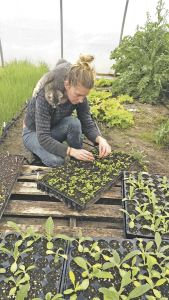 Although John Ferree and Kate Lietz came from somewhat different farming backgrounds, their combined experience turned out to be just right for their new venture in Free Soil, MI.

After working together in Indiana, John and Kate moved to Michigan and started Little Red Organics. “We had at least five years of experience when we got here,” said John. “We had tools and tractors, knew what size well pump we wanted and knew the market we wanted to hit.”

While Kate’s farming background wasn’t the same, it provided experience with different processes and systems. “John interned on one farm, which was ideal, and he learned a lot there,” said Kate. “He had access to land so he was able to move immediately to his own operation. He had a deeper experience and I had a broader experience.”

John knew he wanted well-drained soil instead of the heavy clay he had grown vegetables on in Indiana, and the deep sandy loam on their Michigan farm met that requirement. He’s also learning about weather in the area. “Unlike the rest of the Midwest, we warm up more slowly in spring because Lake Michigan is about eight miles the west of us and it’s a giant heat sink,” he said. “We tend to not get rain in summer – we’re actually droughtier than we thought we’d be.”

The short summer season requires careful crop planning. “We adjusted to doing a lot of production under plastic,” said John. “It’s been challenging to work within a shorter season. We have predictably cool springs and predictably long falls, and usually don’t see nights below 25 degrees and the end of the harvest season until nearly Thanksgiving.”

Kate said crop selection is the result of many years of trial and error. “We’re selling direct to consumers and have a decent size CSA,” she said. “We survey our CSA members to see what people are interested in – whether they’re excited about the weird things we’re trying. We want to broaden ourselves as grower and eaters.”

The Little Red CSA was started in 2015, and while Kate said they had a hard time getting people on board, she realized part of that was being new to the area. “We distribute mid-June through the end of September,” she said. “Sometimes we tag on a shorter CSA for fall.” Kate said they’ve tried several distribution methods, including on-farm pickup and farmers markets, and will add several drop sites this season.

John explained the Little Red Organics CSA model: “On Friday, we do an inventory of what’s coming in the next week. That inventory is posted in the online store on Saturday morning. People who have a subscription have four days to modify their box contents. The ‘store’ closes on Tuesday afternoon, and we pack boxes on Wednesday.” John believes some of the struggles with CSAs are the result of competition with home delivery services that have massive marketing budgets.

“We ask our customers to try along with us,” said Kate, adding that she and John select what they enjoy growing. “That doesn’t mean we’re going to keep something people don’t like, but we’re willing to expose people to something they aren’t familiar with.” Customers are provided with recipes and tips to help them learn about preparing unfamiliar vegetables.

“If a specific variety stands out flavor-wise or fits the needs of the farm or the customer, we’re happy to develop those within reason,” said John. “The Haikuri turnip is exceptional, but it’s rather expensive for a turnip. I’ve tried to replace it with other varieties, but there’s nothing else like it.”

John found another factor that encourages people to try unfamiliar vegetables is by knowing the harvest criteria for each and making sure customers always see the most ideal vegetables. “They should be clean and shiny at market,” he said. “People eat with their eyes. If it’s visually pleasing, people are much more likely to try something they otherwise might not have any experience with.” 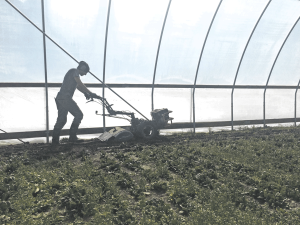 Fresh, clean produce also means CSA member retention. “We stopped growing leaf lettuces because we’re on sandy ground,” said John. “Even after simple irrigation there’s so much soil splash that we can’t remove without damaging it. Now we grow salad mix because we can get the sand out of it.”

In order to extend the growing season, John and Kate rely on several hoop structures and caterpillar tunnels. John refers to himself as a greenhouse scavenger, and searches online for second-hand structures to refurbish. One rebuilt house is heated for propagation as well as growing. Little Red Organics also has two caterpillar tunnels, a 12’ x 80’ shade house and a 30’ x 96’ Quonset tunnel. A wood boiler provides heat for tunnels.

Little Red Organics is certified organic by Midwest Organic Services Association (MOSA), so pest and diseases are managed with organic methods. John said root maggots in brassicas are an ongoing pest issue, along with Japanese beetles and Colorado potato beetles. He relies on a combination of managing residue, crop rotation and crop successions based on the timing of pest emergence. “We’re managing Colorado potato beetle with spinosad,” he said. “For cut flowers, we’ve had to manage fungal problems later in the season, so we’re spraying a good bit of milk in August and September to keep flower production up for as long as we can.”

John and Kate added flowers to their crop list after growing them for a family member’s wedding. “We do hand-tied bouquets for several markets each week,” said Kate. “We also have a flower CSA – it’s a way to stagger the harvest throughout the week. Customers can get a vegetable CSA and a flower CSA and blend them.”

One flower staple is lisianthus, a good producer and unique to the area. Sunflowers are also popular, especially in bouquets, so John and Kate plant this favorite in several successions to last throughout the season. Although they try new varieties each year, they rely on flowers that hold up well in bouquets.

Irrigation is in place to maintain steady crop growth throughout the season. “We put in a 50 gallon/minute system with a variable speed pump,” said John. “That has been exceptional. I don’t know that we could be highly productive on droughty soils without that.”

John and Kate rely on several practices to maintain and build soil fertility. “We’ve taken a slower approach to soil building, and that’s where cover crops come in,” said John. “We use rye, vetch and sudex (sorghum sudangrass) and buckwheat to drive out weeds.” John uses a flail chopper and rotavator to knock down and incorporate crop residue.

Little Red Organics has seasonal employees, but Kate hopes the experience for them is more like an internship because they’re working alongside Kate and John. “It’s a valuable experience no matter what they go on to do,” said Kate. “Food is so fundamental – I don’t think it would hurt anyone to know more about how it’s produced.”

Visit Little Red Organics on Facebook and at www.LittleRedOrganics.com.