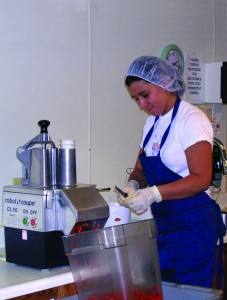 by Sally Colby
Paul Vossen, University of California Cooperative Extension farm advisor, says that small scale farmers are very interested in food safety regulations, and specifically, ‘how is this going to affect me?’
Vossen teaches core common sense methods to reduce the potential for food safety problems in produce, which are defined in what he calls the four Ws: water, wildlife, waste and workers. He also suggests that growers have a means by which products leaving their farm can be traced. “As long as you’re going to do all of these things, you might as well document it,” said Vossen. “You can become self-certified, then become certified by a third-party auditor.”