For the love of Christmas

Steve Ottman loves Christmas, so it’s fortunate he was born into a family that had a strong history of selling Christmas trees. Since he grew up in the business, it isn’t a stretch that the Wisconsin farmer would do the same. 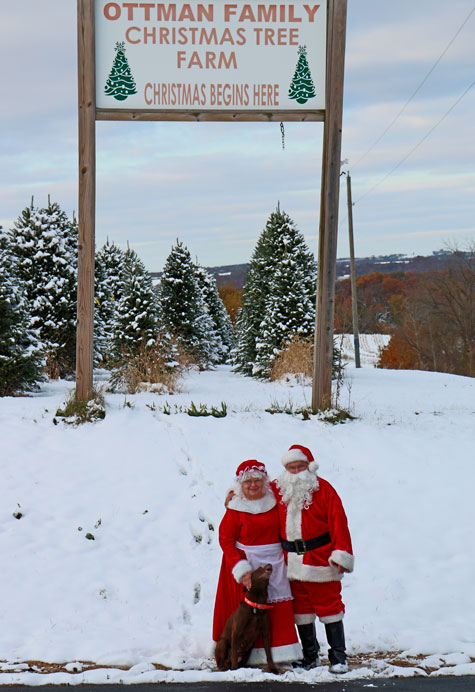 One of Steve Ottman’s favorite parts of the U-cut season is dressing up to greet customers. Steve plays Santa, and Sue Ottman dresses as Mrs. Claus.
Photo courtesy of Kali Williamson

“My great-grandfather sold Christmas trees during the Depression,” said Steve. “My mother’s family had a farm in Door County, and as my grandparents got older, they wanted to see the farm go to their children. There were eight children and only 40 acres, and my parents purchased 14 acres of that farm.”

Steve’s father was a house painter and sold Christmas trees during the holiday season. “To generate income, he got into retailing Christmas trees in 1946 in Milwaukee,” said Steve. “We’ve had a presence there as a family since then.”

Steve recalls that his father hadn’t shared a lot of information about how much work was involved in operating a tree farm, but Steve decided to give it a try. He purchased a 20-acre Scotch pine farm with a friend, and although Steve’s wife Sue was reluctant about the venture, Steve said she enjoys it now.

In 2000, the Ottmans expanded their venture with the purchase of a farm in Dane County, where they grow 30,000 trees today. Species include Fraser fir, Canaan fir, red pine, Scotch pine and white pine. Steve recently planted a new section of Korean-balsam crosses.

“Korean fir are notorious for having bad tops,” said Steve, “but the balsam is supposed to help negate that aspect. It’s a pretty silvery tree. They’re slow growers, so they’ll be ready to harvest in about 10 to 12 years. A lot depends on the soil and how much they’re fertilized.”

To replenish the supply of trees, Steve determines what he sold and plans his order for the following spring. He has found that 2-2s and 3-2s have the highest survivability. “It’s been my experience with the larger ones, especially with hand planting, to have a very poor success rate because I can’t get the roots deep enough into the ground,” he said. “The roots curl and need more water. I have the best success with transplants that are about one foot tall.”

Some blocks are cleared prior to replanting, but in an area close to the road, Steve replaces trees that were cut the previous season. “We do some interim planting in the front sections near the road where we have visibility,” he said. “People who drive by can see what we have. I try to reserve trees that are easiest to access for handicapped and older customers who might have trouble walking to the fields.”

One popular aspect of Ottman Family Christmas Trees is handcrafted wreaths made with fresh-cut greens. “Our wreaths are floral shop quality,” said Steve. “We make some but we don’t have time to make all of them. We cut boughs and send them to an Amish family who puts them together, then Sue decorates them.” Steve explained that wreath materials come from trees that have become too tall or too wide and the trees left unsheared the previous year.

In preparation for the U-cut season, Steve mows between the trees to ensure safe, clear walking paths for customers. Unlike most tree farms, Ottman Family Christmas Trees opens prior to Thanksgiving. “We started that last year,” said Steve. “Another grower who is a close competitor has people calling for trees the first of November. I didn’t think it was a good use of my time, but if people want a tree, they’re going to go to whoever is open. I’m surprised at how many people came that weekend. If we weren’t open, they’d go to the guy down the road.”

One of Steve’s favorite parts of the U-cut season is dressing up to greet customers. Steve or his son play the role of Santa, and Sue dresses as Mrs. Claus. After being welcomed to the farm, customers can cut any tree they want within designated sections on the farm.

Parking at U-cut farms can be difficult, and Steve has added additional parking every year. “We’re on a hill and the lot is gravel, so it’s more challenging,” he said. “We have to have one person to park cars because if someone parks out of line, everybody follows.”

Last year, Steve decided to keep the farm open seven days a week. “We’re getting more people than we anticipated during the week,” said Steve, adding that he opens at 8 a.m. “A lot of seniors like to come out on a nice, sunny day. When the weather is suitable, customers can enjoy an outdoor campfire along complimentary spiced cider, hot chocolate and popcorn.” If a tree comes in from the field with a crooked cut, the Ottmans will square it up. They also offer shaking and baling, and provide a tree care sheet.

Those who prefer to purchase a freshly cut tree can select from a wide variety. Last year, the family constructed a shed to display cut trees out of the weather. Trees are cut from the Ottmans’ own fields, and the supply is replenished as trees are sold until Dec. 15 to avoid waste.

“We display trees as they would be growing,” said Steve. “They aren’t leaning against a wall or laying on tables. We have a good system – the trees look like they’re in a woods. It definitely helps sell them, and also helps prevent damage. With temperatures in the 20s, trees become more brittle and break when people pick up trees to look at them.”

In addition to selling trees directly from the farm, the Ottmans maintain a retail lot with a selection of trees, including about 20 that are colored. “For the retail lot, we cut trees, spray them in the barn and let them dry, then bale them and take them to the lot,” said Steve. “If trees are sprayed in the field and not cut that year, they continue to grow and the inside will be colored with new uncolored growth on the outside. This year we’re doing purple and light blue.”