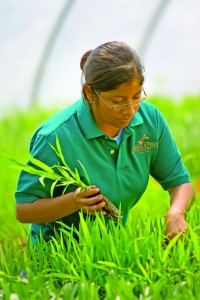 by Karl H. Kazaks
ELSBERRY, MO — The Great Flood of 1993 overtopped levees, inundated farmland, swamped towns, covered roads and displaced communities. Reckoned to be the most costly and damaging flood in U.S. history since at least the 1927 Mississippi Flood, the deluge covered more than 20 million acres in nine states.
It also caused massive tree death, leaving in its wake countless extirpated and drowned trees.
This arboreal aftermath — the need to replant oaks, hardwoods, and other trees and shrubs in affected riparian areas — spurred Wayne Lovelace, president and CEO of Forrest Keeling Nursery, to develop the Root Production Method (RPM®) propagation method.
Lovelace wanted to develop something better than conventional bareroot stock material — with its low survival rates and slow growth — for the massive forthcoming replanting. He wanted to produce trees and plants which would grow faster and have better survivability. So he went to the greenhouse and came up with RPM®.
RPM® is a patented containerized growing system which concentrates on enhancing root growth. The exact pathways for its effects aren’t precisely known, but it is thought that important
hormones for survival, growth, and fruiting develop in root tips.
What is known is that RPM®-propagated trees and shrubs planted according to Forrest Keeling’s recommendations have a 95 percent survival rate, accelerated growth rates, and earlier maturation.
“An RPM® white oak will produce acorns within four years,” said Kim Lovelace-Young, Lovelace’s daughter and vice president and general manager of Forrest Keeling. “We’re providing a four- to five-foot seedling, giving a seven to 10 year jump,” over conventional bareroot seedlings.
Though Forrest Keeling is sought out for its RPM® products, the nursery also grows conventional bareroot stock as well as an “Amp Up” product, which are trees and shrubs that go through the first 12 steps in the RPM® process and then are transplanted into a media bed.
All told, Forrest Keeling sells between 1.2 and 1.5 million trees, shrubs, and seedlings each year.
The nursery specializes in native plant material. They grow 97 varieties of seedlings and 122 varieties of RPM® potted liners, including 22 species of oak and 27 varieties of nut trees. Finished stock includes ornamental shrubs, evergreens, and trees up to 3 inches in diameter.
Because of the unique properties of RPM® material, the nursery has a robust business providing trees and plants for environmental and conservation projects, such as rebuilding riparian areas and quail habitat. Well over 50 percent of the nursery’s RPM® production, Lovelace-Young figured, goes to such restoration work.
Forrest Keeling sells throughout the Midwest and East Coast all the way into Canada as well as into the southern part of the U.S.
“We track every single plant that we grow back to its parent tree,” Lovelace-Young said. That is particularly useful for restoration projects which require saplings to derive from parent trees located within a certain radius of the restoration site.
For best results, Forrest Keeling has developed what it calls its Walk-A-WayTM system. The approach uses RPM® grown trees with correct provenance (e.g., no upland trees for wetland projects).
Site preparation is important to the system, and includes steps such as planting into berms, using a weed mat and tree guard, and planting a companion cover crop.
The cover crop protects against blown-in seeds and, Lovelace-Young said, “gives hard mast trees time before early successional trees maple and ash come in and start competing.”
With the Walk-A-WayTM method just 40 to 50 trees can repopulate an acre, as opposed to the several hundred bareroot seedlings needed to cover an acre with a conventional planting approach.
Another advantage of RPM® trees is their superior survivability in flood situations. “As long as there is a tip of plant above the water and there is a little current — a little movement in the water — the plant will survive,” Lovelace-Young said.
In addition to providing trees for restoration projects, Forrest Keeling also sells quite a bit of bareroot seedlings to mail order catalogs and other growers for field or container production.
“We’ve really expanded our five and 15 gallon tree programs,” Lovelace-Young said. “We just can’t seem to get enough inventory built up.”
In addition to its wholesale business, Forrest Keeling has a garden center. “We have a lot of loyal customers,” Lovelace-Young said.
As an acknowledgement of his groundbreaking work, Wayne Lovelace was presented with a Hall of Fame Award by the American Nursery and Landscape Association in 2004.
Not that Forrest Keeling is resting on its laurels. The nursery keeps developing new products, responding to customer demand. Recently they have started growing Aronia and elderberry.
And the RPM®, now is in its fourth version, continues to improve, too.
“We keep refining it,” said Lovelace-Young.