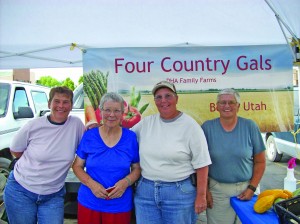 by Sally Colby
When four women moved to the Utah desert for a change of scenery, they really didn’t know what they were getting into.
The women had retired from other careers and were looking for a change. Pat Hosko, also known as ‘Mom,’ her daughter Cindy Dages and Bev Adair hail from Ohio. They purchased a piece of property in Beryl, Utah, sight unseen, after family members checked it out. Shari Thomas from Oregon became friends with Cindy via the internet, and decided to join the three women in Utah. Together, they quickly become known as ‘The Four Country Gals.’
Shari says figuring out how to farm in the desert was a challenge, partly because the climate was different than anything any of the women had dealt with, and also because the property hadn’t been occupied for over a year. “They came out to 10 acres of tumbleweed,” said Shari as she described what the other three women experienced when they first arrived at the property. “I came along and we decided we needed to make more money.” After cleaning up the property, a former potato farm, they started the process of farming on their own, little by little.
“We’re in the third year of a five-year program,” said Shari. “We have successfully grown strawberries in an aquaponic system in summer. Going into winter, we installed a pellet stove for nighttime heat — this winter we’ve been as cold as -28 degrees.”
The aquaponic system, housed in a 12 x 20 ft. hoop house, is thriving, goldfish and koi providing plant nutrients. Shari says they’ve considered using different fish, perhaps fish that could be eaten. “We could use trout, but it gets a little too warm here in summertime and we have a hard time keeping the water cool enough,” she said. “We could use catfish, but warm water catfish don’t taste good. Our preferred fish would be tilapia, but it isn’t allowed in Utah.”
Shari says although plant performance in an aquaponic system is a good indicator of nutrient levels, successful growing is a balancing act. “We do frequent water testing,” she said. “And as soon as we start growing more plants, that affects the water. There’s a finite amount of fertilizer in it.”
At the end of 2012, the women secured an EQIP (Environmental Quality Incentives Program) grant through NRCS (Natural Resources Conservation Service). “With that, we were able to put two high tunnels,” said Shari. “Each one is 20 x 52 ft. with double layer plastic.” Because they’re in an area where frost is possible at any time during the year, the high tunnels will help them stay in business.
“The first couple of years, we bought plants and replaced plants,” said Shari, describing some of their early failures. “We finally took the first produce to a farmers market in 2009.”
Shari noted the vegetable that has outdone everything they’ve grown is Waltham 29 broccoli. Although the tomatoes did well in the high tunnels, the women realized they had planted them too close together, and also found out that they couldn’t plant vining crops anywhere near the tomatoes.
In the past, the women have started seeds in seed plots, but with the head start they’ll get from the tunnels, they’ll plant directly in the ground. As part of the EQIP requirement, they’ve recently seeded hairy vetch as a cover crop in one of the tunnels and will soon plant a cover crop in the other tunnel. The problem they’re seeing now is that the ground is extremely hard and frozen, which makes germination difficult.
“The cover crop only has to be up for about four to six weeks,” said Shari. “It has to grow to several inches high, then we can till it in. The purpose of the cover crop is to prevent erosion, and to provide natural nutrients.”
The high-alkaline soil benefits from amendments including sulfur and a soil conditioner. “We’ve managed to bring the pH down from 8.0 to 7.6 in five years,” said Shari. “Now that we’re in the high tunnels, we have more control.”
In the tunnels, the women plan to grow nine popular farmers market vegetables. They expect to have an eight week jump on the season, and should be able to grow into late fall. Although Shari knows of two other growers at the farmers market who are growing in high tunnels, she’s looking forward to having an opportunity to sell more.
The Four Country Gals attend two farmers markets in Cedar City, Utah. One is held on Saturday morning on the grounds of a feed store, which is a great promoter for the Four Country Gals. It’s a year-round market, and they sell inside the store throughout winter. The other market is held on Wednesday evenings, starting in July and ending in October, supported by downtown Cedar City.
Shari and Bev usually go to the markets. On Saturday mornings, they’re up early to pick, then pack their trailer and leave at daybreak for the market that opens at 9 a.m. After several years of doing the markets, Shari has noticed a distinct difference in clientele at the two markets. “The Saturday morning shoppers are there to do some serious shopping,” she said. “They come in, get what they want and leave. Then late risers, including college students, come in late morning.”
In addition to offering fresh vegetables, the Four Country Gals have developed a unique product to offer customers: cajeta, a thick, luscious caramelized sauce made from goats’ milk. The women already have a small herd of goats on the farm, and have received the go-ahead from the state to develop a commercial kitchen for cajeta production. Just as important is the thumbs up the women received from market customers who have tried their cajeta.
The Four Country Gals are active on Faceboook and Twitter, and keep customers up-to-date on the latest happenings on the farm through these venues as well as their website at www.fourcountrygals.com