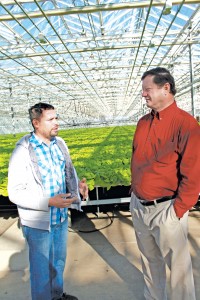 by Karl H. Kazaks
STEVENSBURG, VA — A few years ago, Joe van Wingerden and his wife Georgia found themselves facing a problem —as the owners of a 12-acre greenhouse, they were about to lose their business’ anchor — a tulip operation.
As experienced horticultural entrepreneurs, the couple turned their predicament into an opportunity. They helped their son Ben start an orchid operation in one part of the house and in another part they established Fresh2O Growers, a hydroponic greens operation.
Managed today by Mary-Scott Standish, Fresh2O produces 2 million head of lettuce per year, making it the largest hydroponic lettuce producer in the mid-Atlantic. Buyers include Whole Foods, Wegman’s, Safeway and wholesalers Coastal Sunbelt in the Washington D.C. area, Produce Source Partners in Richmond, VA and Cavalier Produce in Charlottesville, VA.
The operation uses a proprietary growing system designed by Joe. “It’s the most efficient and technologically advanced NFT system in the world,” Standish said. Patents are pending for a number of Joe’s innovations.
Fresh2O grows eight types of lettuce, mainly red and green Bibb, red and green oak leaf and a Batavia type red and green leaf lettuce with experimental-level production (at present) of red and green Romaine. They’re also growing some basil.
As the operation continues to grow and production techniques are refined, the company plans on introducing other greens and herbs. If Fresh2O wants to add to their footprint, they’re well situated, given that Joe runs Prins USA, our country’s outpost of the Dutch greenhouse leader.
Before partnering with Prins, the van Wingerdens ran a commercial greenhouse operation for some 26 years. Once they got into greenhouse construction, they built Virginia’s largest greenhouse, 36 acres.
As it turns out, it was into that large greenhouse that the tulip grower moved when leaving van Wingerden’s greenhouse here.
Fresh2O’s facility is very environmentally friendly. There is no runoff, and all fertilizer is reused. Grower Arturo Silva keeps an eye on all production variables. (The house uses a Priva control system.)
Fresh2O has had the success it’s had, Joe van Wingerden said, because of Silva and his production team produce a consistently quality product and because Standish has managed to keep the company moving in the right direction.
Eventually, Standish hopes the operation will produce 10 million heads of lettuce per year, or more, plus accompanying variety herbs and greens.
Even with those ambitions, Fresh2O sees itself very much as in association with smaller greenhouse producers. In fact, the business is at present open to contract growing for and selling to other producers.