From cherries to pumpkins 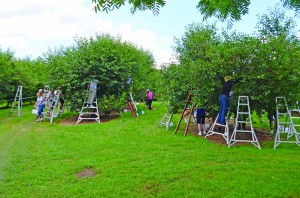 by Sally Colby
Dwight Baugher walks through a six and one half acre, 30-year old block of Montmorency cherries and says the fruit growing there isn’t enough to supply what his customers will purchase. Although he admits that’s a good problem to have, Dwight would like to be able to grow enough for all who visit the family’s you-pick farm and farm market in Westminster, MD.
Baugher’s Orchard is a true family business. Allan and Marjorie Baugher, Dwight’s parents, started the farm and are still active in the business. Dwight’s brother Nathan runs fruit market at the family’s restaurant. His aunt Dottie helps oversee the bakery and works in the fruit market, and his sister Kay is the bookkeeper and is involved with the family’s restaurant.
On a busy summer day, 30 pickers can barely keep up with market orders for tart cherries, and the U-pick customers often wait in line to have cherries washed and pitted right on the farm. Dwight says the sweet cherry market is excellent as well, and  customers who come to pick sweet cherries on weekends arrive in numbers that rival October weekend crowds who come for apples and pumpkins.
As the family developed the U-pick aspect of the business, they found that cherries, among other fruits, are a food staple for many nationalities. Dwight has seen a distinct difference in peach and apple choices among various nationalities, with certain customers who prefer sweet fruit and others who choose tart.
To meet the growing demand for tart cherries, Dwight has established some new blocks with Jubileum™, Danube™ and Balaton®; an assortment he says suits the taste of the international clientele who visit the family’s market. The new orchards are planted at a slightly higher density, and will be pruned to keep them as low as possible for U-pick customers.
Dwight says of the tree fruit crops, tart cherries are consistent and not difficult to grow. “Sour cherries are a pretty consistent crop,” he said. “We don’t really have to prune them every year, but we try to. If we start picking peaches heavily, we don’t get to all of the trees.”
Just as cherry season ends, customers will start arriving for U-pick peaches. “We’ve been in U-pick tree fruit for about eight years,” said Dwight, whose father encouraged him to offer you-pick peaches. “Peaches are tough to pick properly, and I wasn’t sure customers would do it right. We use signage and explain undercolor, and we really try to separate sections of the orchard so that people can’t get an unripe peach.” Dwight also watches the weather closely to determine which sections of the orchard will be ready for PYO customers.
Due to a gap between the U-pick peach and apple seasons, Dwight is preparing acreage to start blueberries this fall. Throughout the summer, he’s managing the U-pick fruit, monitoring the parking lot and keeping an eye on the farm market, and just planted 75 acres of pumpkins. He grows several sizes and types, including what he refers to as jack-o-lantern size that weigh about 18 to 20 pounds. “We don’t place pumpkins,” said Dwight. “We grow a big field of pumpkins, and they’re on the vine. About 80 percent of my acres are for growing the 40-pounders. That’s what wholesalers want, but customers in the U-pick field like large ones too.”
One marketing advantage for Baugher’s Orchard is that the wagons traveling to pumpkin fields drive by the farm’s apple orchards, some of which are available for U-pick. “People see bins of picked apples next to the trees and realize ‘this is a real farm’,” said Dwight, noting that the U-pick draw continues throughout the growing season. “The parking lot is often so full with customers that we can’t get to the packing house — we’re going to start hauling apples at night.”
Baugher’s Orchard charges one dollar for a ride to the pumpkin field, and customers pay for what they pick. Seasonal produce, food vendors, a play area, pumpkin bounce and other fall activities keep people coming. “We cycle about 5,000 people through here on a weekend,” said Dwight. In addition to traditional pumpkins, Baugher’s Orchard grows gourds, white pumpkins and jack-be-little pumpkins. A cider mill installed in 1983 produces 60,000 gallons/year of pasteurized cider, and the on-site bakery is busy with seasonal baked goods.
When Baugher’s Orchard first offered PYO pumpkins, there was just one wagon to take customers to the field. “Now we have eight custom-made wagons running as much as possible, four or five cashiers for a pumpkin line and additional registers in the market,” said Dwight. “We keep trying to make it smoother — you can get to a point where there’s so much going on that you do a bad job. If you drop the ball — whether it’s with parking or lines at the register — people step back.”
Baugher’s Orchard has cold storage on the premises and packs for the wholesale market. During the week in fall, Dwight and his brother haul tractor-trailer loads of pumpkins and apples to markets. Dwight talks about the balance required in a diverse operation such as the one his family has developed. “If the workload is sized to the acreage, it works,” he said. “I couldn’t pick this many cherries if I didn’t have 30 guys, but if I didn’t have 80 acres of peaches and 150 acres of apples, I wouldn’t have 30 guys.”
With farming nearly 700 acres, including 90 acres of sweet corn, 14 acres of tomatoes and 30 acres of cantaloupes and seedless watermelons, Baugher and his family are never at a loss for something to do. “We’re fortunate,” he said. “We have lots of customers, and if we have good crops, we have a following that makes it easy to sell U-pick, retail and wholesale.”
Visit Baugher’s Facebook page and at www.baughers.com