From honey bees to apple trees, 3 Bee Farms has grown 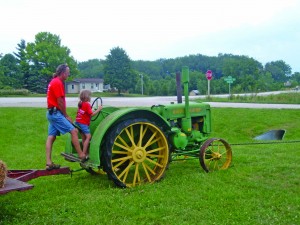 by Kelly Gates
3 Bee Farms of Griswold, IA, was originally founded as a small beekeeping operation at the homestead of Mike and Donna Brahms. The couple had never tended to bees before. But according to Donna, that didn’t keep them from diving right in.
“We were talking to Mike’s father one day about bees and the next thing we knew, my father-in-law had bought us everything we needed for two colonies of bees,” Donna told Country Folks Grower. “It didn’t matter that we didn’t know what we were doing. It was a true trial and error situation that we worked through by reading, watching videos and joining the Iowa Honey Producers Association to learn everything we could through seminars and conversations with other members.”
The beekeeping business began in 1993 and before long there was enough surplus honey for the Brahms to sell some at local farmers markets. As they got more involved with sales, the family decided to grow additional crops of fruits and vegetables to take with them to the markets each week. Mike had always farmed. They just switched to growing vegetables on a larger scale than the home garden.
Then, the opportunity arose for a full-fledged growing operation.
“In July of 2009, we bought an apple orchard that had been in existence since 1930,” said Donna. “We purchased 33 acres in all, but the orchard sits on around 17 acres of that land. We took out some of the stumps from trees that had been cut and turned that into an area for our other fruits and vegetables, plus additional space for our corn maze, pumpkin patch and other activities.”
Some of the trees in the orchard are over 60 years in age. As a result, the Brahms — and their son Steve — have spent time replacing them with dwarf varieties over the years.
These, said Donna, are easier for U-Pick customers to reach without assistance. They also begin producing fruit faster than other varieties.
3 Bee Farms sells its 23 varieties of apples to people who wish to pick their own and to those who prefer to purchase pre-picked produce at its on-site retail shop, aptly named The Apple House.
“We’re hoping to expand our retail store eventually,” said Donna. “But for now, there is plenty of room for the apples, apple pies, honey, our line of jams and jellies, salsas and salad dressings in there. I also make hand lotion, lip balm, candles and soap out of beeswax and honey and we sell that at the store too.”
Dip mixes, bread mixes, barbecue sauce, salsa, beeswax nativity sets, magnets and ornaments are also sold there. The facility is equipped with a commercial kitchen for making consumables.
The farm also has its own cider press. Approximately 600 gallons are made there annually.
Over the years, the Brahms’ farm produced enough fruits, vegetables and products to supply several local grocery stores and restaurants. The owners plan to increase their wholesale presence even further in the future, expanding the farm’s reach during peak produce seasons.
Many guests come for private events and parties. 3 Bee Farms offers hayrack rides and fire rings for such outdoor gatherings, with the opportunity to enjoy s’mores and hot apple cider or a more filling meal including hotdogs and chips.
“We keep expanding our products and services every year,” said Donna. “Our focus is on agritourism, with a wide variety of produce and products for people to buy, educational tours, events and all sorts of activities to keep people entertained no matter how often they visit.”
During the fall, it takes more than Donna, Mike and Steve to run the operation. Donna’s sister lends a hand. The Brahms’ other son and his wife also help out during peak season. Another son just retired from the Army and lives in Oklahoma with his family, so is not available to help.
As the farm is continually expanded, the family expects to hire a small staff of workers. But for now, 3 Bee Farms remains a family affair, with enough planting, picking and party and festival preparations to keep the Brahms busy virtually year round.