From one season to the next 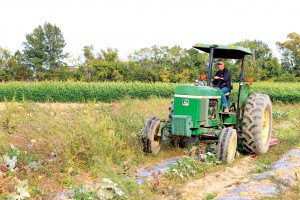 by Sally Colby
Like many modern nursery and vegetable operations, Miller’s Country Gardens can trace its start to a truck patch and a simple roadside stand.
“My grandfather Raymond started with a truck patch and vegetable stand in 1954,” said Dale Miller, who operates the Delaware, Ohio garden center and farm market with his brother Mark. “It was a truck patch, and he had a stand on the road to sell melons and sweet corn.”
Although he had grown up in the industry, Dale went to Ohio State University and obtained a degree in horticulture. “Up to that point, we just had a small greenhouse to grow transplants,” he said. “After college, we started growing bedding plants and perennials.” Dale and Mark took over the operation in 1982, and have expanded Miller’s Country Gardens to a full-service farm market that offers annuals, perennials, fruits, vegetables, garden supplies, seasonal favorites and fresh baked pies and other specialty foods.
Keeping a multi-phase operation running smoothly throughout the growing season is a challenge, but the Millers start with a plan. Each year begins in the greenhouse, with peppers that are started around March 1, followed by tomatoes and cucurbit crops. Miller keeps field crops separate from retail crops for more successful IPM and disease management.
“We raise 150 varieties of heirloom tomatoes for retail sale,” said Dale. “It’s a good idea to keep the retail crops separate from the field crops since there are so many different varieties.” Dale says that customers who are new to growing heirloom tomatoes are mostly interested in flavor, while experienced home gardeners are more concerned about disease resistance.
Hanging baskets are a major draw for customers in spring, but must be carefully planned prior to the season. Dale designs and plants the hanging baskets himself, using a combination of plants that do well together and provide an attractive, balanced, basket. “I use verbena, calibrachoa and a petunia,” he said. “Verbena has a different texture, the petunia cascades downward and the calibrachoa goes in the center and spills out. Between the textures, color and size, those three make a nice basket.”
Dale relies on fair weather weekends from May through October for a good sales year. “The weather is more important than the economy. If we have bad weather, even if people have money, they won’t go out and spend it.”
Although the growing season is over and the garden center is closed, the Millers have plenty to do before it’s time to start seeds for 2016 One task for late fall and early winter is making decisions about what to plant and placing seed orders.
“We’re so busy through October so we don’t have time to do anything until we close,” said Dale. “Then we’re trying to get things done before winter. We’re plowing and picking up the plastic mulch from the melons, tomatoes and peppers. We recycle the plastic mulch, and we also put new plastic on the greenhouses. When there’s no snow or wind in November, December and January, we put new plastic on the greenhouses. It has to be very calm with no wind.”
In order to pick up the plastic mulch and leave the fields clean for the next season, any remaining vegetation is mowed down as close to the plastic as possible. “We like to do it early as soon as the crops are finished,” said Dale. “Then the plastic can be picked up easily through the dry material and comes up nice and clean. We try to mow at least a month before we pick up the plastic so the material is dry and off the plastic.”
Perennials are started in the greenhouses the third week in February. Miller’s Country Gardens makes full use of 10 greenhouses, nine of which are 24’ x 96’ tunnels where most of the growing takes place, and one is a large retail greenhouse. All houses are heated with propane. Dale starts seeds in flats in a germination chamber, as soon as they emerge, he moves the flats to a house that’s maintained at 70 to 80 degrees until they’re ready for transplanting.
Mums for fall are started outside in June. Each year, Dale grow 2,800 mums that are kept moist through summer with overhead irrigation. Millers’ fall activities include a corn maze, play area and pumpkin picking.
Dale says he might try some new bedding plants for 2016, with customer appeal as the number one goal. “Most customers don’t buy entire flats,” he said. “The bedding plants that are potted in 4 1/2” to 5” containers are the most popular. People are looking for carefree plants – they want plants they don’t have to dead-head. So much of the vegetative material available now is sterile so it keeps on blooming and doesn’t produce seed.”
Once he has enough plants ready for potting, Dale creates large hanging baskets that are used to line the long driveway entrance that leads to the garden center. “We use different material each year to give people ideas,” he said. “We have combination planters near the store entrance to provide inspiration and ideas.”
Visit Miller’s Country Gardens online at www.millerscountrygardens.com.