From roadside stand to retail gold 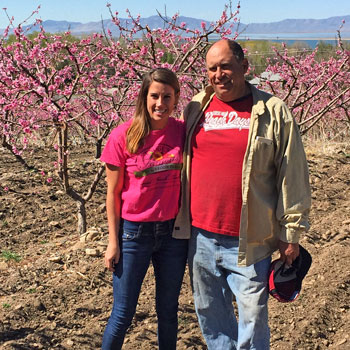 Thayne Tagge and his daughter Mindi in front of some of their many peach plantings.
Photos courtesy of Tagge’s Fruit and Veggies

A prosperous businessman claiming that it all started with a little lemonade stand is something of a dubious cliché. But sometimes a small roadside stand really is where a successful business is born.

Thayne Tagge, owner and operator of Tagge’s Fruit and Veggies in Perry, Utah, is quick to point out that while a small stand is where he got his start, it certainly didn’t stay that way.

A native of Salt Lake City, Thayne studied accounting at the University of Utah. As a certified public accountant, he worked for KPMG. “As a CPA, my schedule was really freed up after tax season. I essentially had my summers off, and I got to pursue my other interests,” he said. In 1995, he opened his first fruit stand. “We started with Bear Lake raspberries. They only have a three-week season, but they’re wildly popular and we did very well,” he explained.

Thayne and his wife Cari were encouraged by the results of that first summer season and decided to expand their offerings. Thayne said, “We actually had a number of our customers ask for peaches – enough that we added peaches to our stand that second summer. Brigham City peaches have been our best sellers to this day.”

By the time the third year had rolled around, Thayne and Cari decided that this was what they wanted to do full-time. While they enjoyed selling others’ produce, they wanted to grow their own and oversee all aspects “from planting to plate.” According to Thayne, “We bought a 25-acre farm in 1997. It was a perfect setup. The seller agreed to stay and help us through our first year. It came with its own fruit stand, tractor and equipment. It was turn-key ready.” The only substantial change Thayne made to the facility was changing the furrow irrigation system to a drip irrigation system in 2003. “It was an effective anti-erosion move on our part,” he said. 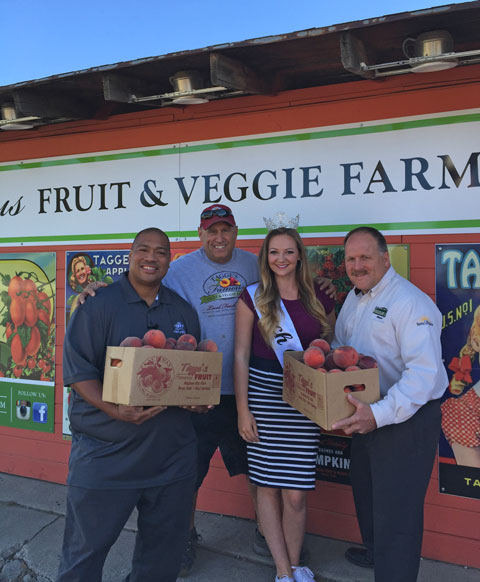 Since then, the Tagges have added to their plot, purchasing an additional 10 acres in 1998, 28 acres in 2004 and eight more acres in 2016. That’s a lot of land for a lot of produce. “We now have 37 varieties of peaches, and they are by far our main revenue generators. Everything else is gravy, including our certified organic Willard Bay blackberries,” Thayne noted. “We’re the only place you can find them in the state.” In addition to this, they lease 42 acres for growing sweet corn and pumpkins.

While the Tagges do sell to chains like Whole Foods, they place their focus on their own retail sales. “There is good money is selling our stuff wholesale, but it’s only about 10% of our total sales. We’re one of the largest farm-to-retail operation in Utah. We really focus on that,” Thayne said. In addition to their on-site retail location, Tagge’s Fruits and Veggies operates in 14 farmers markets within a 60-mile radius of Salt Lake City. Their retail sales are further bolstered by the farm’s very successful CSA program.

“We started our CSA program in 2012. Today it is the largest in the state. We have over 600 shareholders. We offer four-person, two-person and one-person subscriptions,” he said. “The only complaint we ever get is that there’s just too much food in the box.” CSA members can pick up their boxes at the farm, or Thayne offers a delivery option “all the way from Provo to Logan.”

As for the challenges he faces, Thayne described the difficulties of fitting a year’s worth of work into a five-month season. “We’re working from May 12 to October 12. Every minute counts,” he said. Managing a large number of employees also keeps him very busy. “We have to send out over 220 W2s.”

Looking ahead, Thayne wants to see his farm continue to grow and prosper. “Our next project is planting 10,000 more blackberry plants. We’ll be keeping busy.”