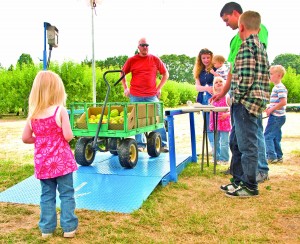 by Kelly Gates
Bob Jossy planted the first U-pick peach trees at Jossy Farms of Hillsboro, OR in 1979, the same year his first daughter was born. A fourth generation farmer in Washington County, Jossy always knew he would be a grower, but he never could have imagined that one day, he would oversee such a diverse array of crops, including hazelnuts, walnuts, peaches, Gravenstein apples, Bartlett pears, seed crops and grain.
“When I started at the farm, we had around 125 acres of hazelnuts, and eventually I grew the hazelnuts acres to around 300 acres,” he said. “But, like many growers, we had Eastern Filbert Blight issues and as a result, I’m down to 120 acres. I still enjoy growing hazelnuts, but U-pick fruit has become a bigger part of my business over the years.”
Jossy Farms was quite a pioneer in the PYO arena, having planted an orchard specifically for U-pick customers during the late 1970s. Back then, the purpose of such a setup was primarily to allow people who couldn’t afford pre-picked to come out to the farm and gather their own produce at a lower price. This also enabled Jossy to grow more products without having to pay workers to harvest as much each year.
“I was looking for a way to sell more fruit without having to pick and pack and having to call people to come out and get it when it was ready,” he said. “Now, we’re the heroes. U-pick is all the rage and everyone wants to come out to pick their own because it’s such a fun experience.”
Customers are so enthralled by the process that the average purchase is around 60 pounds of produce. Some take their excess bounty home to pass out to friends, family and neighbors. Others intentionally pick large amounts to preserve them for year- round eating.
People pick so many pounds that Jossy Farms had a wagon-accessible scale installed to make weighing and checkout more efficient during the busy harvest season.
“People push garden wagons with empty containers in them out to the orchards and pick as much as they can. Then, they bring them back to our scale, pull their wagons onto it and have their produce weighed,” noted Jossy. “The first 10 days to two weeks of harvest season, all we have are peaches, but apples ripen shortly thereafter and pears just after that. Sometimes, they get lucky and all three are in season at the same time.”
The peaches, pears and apples are so popular, the farm typically has five cashiers on site to weigh the fruit and take payments.
Once the orchards have been picked clean, there is a brief lull before the nuts are ready to harvest. A small portion of the nuts is sold on the farm during the first three Fridays and Saturdays in November, with the rest sold through a co-op.
According to Jossy, six days is all it takes to sell out of the washed and dried nuts, a division of the farm managed by two of his daughters.
“One of my daughters also manages the advertising and marketing program here at the farm. We have a small event area that my third daughter oversees ,” said Jossy. “Then, my two oldest daughters get together in November and sell a lot of pounds of nuts in just a few short days.”
The 40-day window of time dedicated to PYO peaches, apples and pears, coupled with a brief nut sales period in November might seem short, but it is more than enough to earn the farm a large portion of its annual profits. The other months of the year are filled with orchard maintenance and other general tasks around the property.
Jossy plans to replace around 60 acres of his hazelnut trees in upcoming years. But rather then ordering seedlings from other growers, he will pull from a small nursery he established at his farm.
“We figured out that we could easily grow our own hazelnut trees on four acres and propagate new trees from those,” he said. “The nursery is filled with new varieties developed by Oregon State University that are highly disease and pest resistant. As for the fruit trees, we replace those with trees ordered in from other suppliers since they are not as easy for us to grow on site.”
Once planted, each new hazelnut tree takes upwards of six years to begin producing nuts. In the meantime, the owner considers the trees an investment in the farm’s future.
Even after reaching maturity, it takes several years for the individual trees to earn enough profit to pay for the previous years of growing. So Jossy takes care to only have a small portion of his orchards — whether fruits or nuts — occupied by non-producing plantings at any given time.
“We still have quite a bit of replanting to do in upcoming years, but I don’t plan on planting any more acres than I currently have overall,” he said. “The farm is the perfect size for me and my family to manage, with enough fruit for our U-pick customers.”