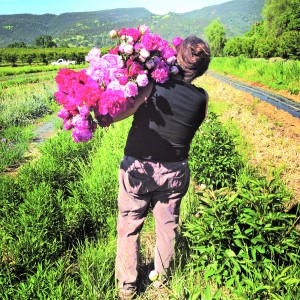 by Sally Colby
Perusing seed catalogs isn’t a seasonal pastime at Full Belly Farm. The year-round growing season in Guinda, CA means the farm operates 365 days a year, so there’s a continual challenge to keep as much acreage in production as possible.
As one of the owners of Full Belly Farm, Dru Rivers handles a variety of tasks. Between flower planning, planting, general sales, attending farmers market and managing employees, she’s busy throughout the year.
“Full Belly Farm is a small farm gone large,” said Dru as she described the 350-acre farm. “We grow more than 100 crops every year. At any one point, we have many different crops growing. Our biggest crops are tomatoes and melons, and we have 25 acres of each of those.”
Dru describes the climate of the northern California farm as ‘benign’. “Our winter months aren’t as busy as summer, but not that far behind. At this time of year, we’re preparing fields and planting all of the crops that will go in for the colder winter months through December and January. We’re planting root crops like carrots and beets, and potatoes went in last month. Every week we put in a new planting of greens — spinach, mustard, chard and lettuce. Some of the lettuce was harvested in November, and we’ll harvest this planting of lettuce throughout January and February.”
As the Full Belly crew continues to pick summer’s tomatoes, eggplant and peppers, they’re harvesting broccoli, squash, cabbage and root crops. Once the tomatoes are all picked, those plants will be pulled and winter cover crops will go in. “We use an oats vetch mix for winter cover crop,” said Dru. “We’re also composting and tucking away the summer fields.”
Keeping records on every crop is an essential aspect of planning. “We have maps and planting logs for each field,” said Dru. “We know which fields were planted and when, when a field was cover cropped, when compost was applied and when we did soil tests. Some of it the information is on the computer, but a lot is still done by hand. We also have an overlay map on the computer. When we’re out in the field, it’s a lot easier to use a piece of paper or a log book.”
Most crops that are established at this time of year are direct-seeded, although some are started in the greenhouse. Early tomatoes, eggplant, peppers and some melons are started in tunnels in March and April.
As a certified organic farm, an important aspect of IPM includes careful crop rotation. Dru says some crops can be grown successfully in the same field for several years, but certain crops, like tomatoes and potatoes, are grown in a two or three year rotation to manage disease and pests.
One of the main crops at Full Belly Farm is flowers for fresh cutting, which requires a lot of planning. Dru is currently planting bulbs and ordering seeds for next year.
Fruits, including nectarines and apricots, are grown on 60 to 70 acres. “We also have 40 acres of almonds and 15 acres of walnuts, and smaller amounts of olives and figs,” said Dru. “Our CSA members love the diversity. We grow wheat and barley that we mill and sell as flour, and we also grow corn and make corn meal.”
All summer crops are irrigated, and crops are irrigated through fall unless there is sufficient rainfall. “It’s variable,” said Dru. “Sometimes we start getting rain in October, but sometimes not until December. Last year we irrigated almost all winter. We try to be as efficient as possible so we use a lot of drip irrigation. We have some overhead sprinklers but not many.”
Some water comes from a river that runs through the farm, but most is from agricultural wells. “We have riparian water rights for river water use,” said Dru, “but in drought years, we’re restricted as to how much we can use. People don’t understand that in a drought year, water quality is compromised. The salts and minerals are a challenge for fresh-market vegetables.”
Full Belly Farm’s 1,200-share CSA accounts for about a quarter of total sales. Another quarter of fruit and vegetables is sold at farmers market, and the rest is marketed directly to retail stores. “We have a great following,” said Dru, describing the CSA. “We started in 1995, which was the beginning of the CSA movement. We aren’t elaborate, and we only sell what we grow on our farm, and we have just one CSA box size. But people can add to their box with items like canning tomatoes or flowers in summer.”
Dru praises the Full Belly crew for working hard to plant, grow and harvest crops. “A big goal of ours is to have year-round employees,” she said. “We try to keep everyone on year-round, weather permitting.”
In addition to keeping the farm growing, Full Belly Farm hosts numerous events throughout the year. One popular event is ‘Put Your Hoes Down’, which was Dru’s idea. “It started out very small,” she said, adding that the event is a fund-raiser for non-profit groups in the area. “Now it brings about 5,000 people here. We have farm tours, workshops on farming, sheep shearing and cow milking demonstrations, and agricultural craft vendors.”
Dru and her husband Paul Muller have four children, each of whom pursued higher education then returned to the farm. Daughter Hallie runs farm tours, son Amon and his wife plan and execute farm dinners, Rye manages the technical aspects on the farm and Hannah will help her mother with the flowers — one of the top crops at Full Belly Farm.
The younger generation has proven to be social media savvy, and they help with Facebook, Instagram and Twitter. “We’re moving toward online ordering,” said Dru. “People can renew their CSA subscriptions online.