Geisert Farms and Farm to You: Creating connections with Missouri growers 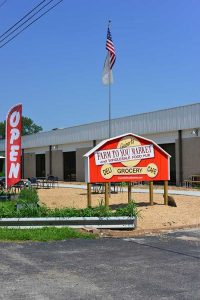 by Alex Huebner
Todd Geisert’s farm in Washington, MO is not hard to find. A self-serve produce stand sits right on the side of the road, next to his sprawling pig farm. The Geisert family farm is best known for their pigs and meat products, but Geisert’s farm stand and new store are making their mark in Missouri.
Geisert Farms started in 1916 as a hog farm with a few row crops and stayed that way for the majority of its history. The process then and now is simple; the pigs stay on pasture until it’s time to go to market, then crops take their place on that same piece of pasture. This crop and pig rotation works well, since the leftover pig manure creates nutrient-rich ground for the crops to flourish. Any produce that isn’t customer-ready is fed back to the pigs.
“Nothing goes to waste. It’s a win/win situation,” said Todd.
At first the only crops being used in this method were row crops. In 2008, Todd started growing tomato plants on the post-pig land. He put a little wagon out on the side of the road and sold the tomatoes on the honor system. After multiple days of selling out early, Todd decided to grow and sell more tomatoes. Soon other produce like corn, pumpkins, beets, winter squash, and zucchini joined the large amount of tomatoes at the stand and sold just as quickly. A cooler located near the stand sold pork products from the farm as well.
Todd and his wife Katie decided that they needed to expand the farm stand and not just by adding another wagon. Together, they came up with the idea for Farm to You, a market that would sell their bountiful produce and pork products, along with the harvest and value-added products from other farmers in the area.
“We can’t do it all. Everyone is good at different things,” Todd said. “We wanted to bring them all together.”
The Geisert family purchased an old 165,000-square-foot factory building a half-mile from the farm. So far, 10,000 square feet of space has been turned into a retail store, a commercial kitchen, a café, and a distribution center. A patio area is in front of the store for café customers and features a PYO herb garden.
The store was opened officially in the spring of 2016, which coincided with the 100-year anniversary of Geisert Farms.
One mission of the Farm to You store is to source all products locally; everything is obtained within a 100-mile radius. From the product on the shelf to the condiments in the café, all efforts are put in to use as much local product as possible.
Even with the local parameters in place, there is a wide variety of products in the store.
“We understand that it’s not for everyone. But it’s a quick stop for most. You go in, you get everything you want,” Todd said.
Another goal for the store is to create the majority of the products within the walls of the sprawling warehouse.
“We want everything, the produce, the livestock, to come into the backside and come out of the front side. Keep everything in house,” said Todd.
Other farmers, greenhouse owners, and other producers could also come to the warehouse to process their harvest and create their products.
Beyond the store and café, the distribution center delivers products from both Geisert Farms and the businesses that sell within Farm to You.
“We go all the way from Missouri to southern Illinois,” Todd said. This includes stops to the multiple local restaurants that have formed a partnership between Farm to You and Geisert Farms.
Future plans for the store includes the addition of hydroponic and aquaponic sections inside of the warehouse.
“But it’s a matter of funding and getting the right person to do it,” he explained.
Another plan is to launch an online store, so even out-of-towners can experience the bounty that Missouri has to offer.