Generations who didn’t give up 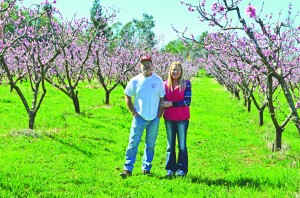 by Sally Colby
When Gary Machado’s grandparents arrived in Auburn, CA, from the Azores Islands in 1923, they spent their life savings — $800 — on a 17-acre farm. The property was already planted in fruit trees, which continued to thrive under the care of several generations until fire blight devastated the pear trees in 1964.

“They had to decide if they wanted to give up or go on,” said Gary’s wife Shawnie. “They decided to go on, and planted more apples and pears. Later, we planted peaches, plums and nectarines, and now we have more than 6,000 trees.
As other land became available over the years, the family added acreage to the property and planted more fruit trees. Today, the Machados grow a variety of apples including Gravenstein, Mutsu, Empire, Gala, Fuji, Rayburn, Pippin, Winter Pearmaine, Pink Lady, Winesap, Granny Smith and Arkansas Black. They also grow several peach varieties including Red Haven, Elberta, Red Top; along with nectarines. “We also have one big fig tree in the middle of the orchard that supplies us with all the figs we need for the year,” said Shawnie. “It’s probably more than 90 years old.” Many of the trees in the orchard are also at least 90 years old, and rather than replanting entire blocks, the Machados replace trees as they die.
In 1980, the Machados opened a pie shop at the orchard, which has helped them maintain a regular stream of customers throughout the year. Shawnie says Gary restored an antique apple peeler and has created other equipment to automate the process. “He put together a cherry pitter, a cherry stemmer and washer,” she said. “He also made a pie dough mixer and a pie press. We’ve since purchased a new cherry pitter that is a lot faster.”
The pie shop has become a major outlet for the Machado’s own fruit. With each season, a different fruit pie is featured. In addition to the tree fruit, the Machados grow raspberries and blackberries, and purchase boysenberries and marionberries and freeze them for pie-making. Since the climate isn’t ideal for growing cherries and apricots, those fruits are purchased from other growers. Before Thanksgiving, the pie shop takes orders, and last year, more than 6,000 pies were made to fill orders. “We sell hundreds of pies every day,” said Shawnie. “We also sell pies to some local restaurants and to a farmers’ market vendor.”
The Machados squeeze their own apple juice on the premises, and offer produce purchased from a local grower. Some customers purchase apples or pears by the bin, and distribute the fruit among themselves for canning. Gift baskets at Christmas help round out the pie shop’s offerings.
Gary handles most of the orchard work throughout the year. The main pests include twig borers, coddling moth and oriental fruit moth. Whenever possible, Gary uses mating disruption for pest control. He controls fire blight on the pears with a series of sprays applied over bloom.
Drip irrigation, with water supplied through Placer County, is in place throughout the orchard. “They cut us back 25 percent, but that won’t be too bad,” said Shawnie as she talked about the current drought conditions. “We’ll just water one block at a time.”
Gary spray thins the apples when fruit is 3/8” in diameter, then when remaining fruit is still under 1” in diameter, he hand thins; leaving apples six to eight inches apart.
The Machados work with a consultant to let them know when pears are ready to pick. “We pick when they’re green,” said Shawnie. “It’s too late to pick them when they’re actually ready to eat. Then we have to teach customers how to ripen them at home.”
Shawnie says one of the best moves they made is to open the farm in October for an apple festival. “We take people to the orchard and explain how we thin, prune and graft,” she said. “We talk about the different apple varieties we grow. Last year, we sold 22,000 pounds of apples that day, along with many pies and other items.” Last year’s festival drew more than 3,000 people, many of whom became regular customers of the orchard and pie shop. This year will be the fourth apple festival, and the Machados expect that the number of visitors will grow.
Two of Shawnie’s sons currently work at the orchard, and one may eventually take over the business. “We’re the largest apple orchard in Placer County,” said Shawnie. “It isn’t really a job — we love going to work every day.”