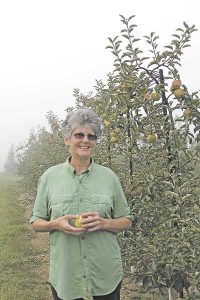 by Karl H. Kazaks
PEMBROKE, VA — When Georgia Haverty moved to the property which is today Doe Creek Farm, she came with her parents from Northern Virginia to an operation which had 100 acres of large trees and a packing house built in the 1930’s.
It was the late 1970’s and none of the family had ever tended to an apple orchard before but they learned what they had to and became wholesale apple growers.
Georgia worked in the packing house, helped prune trees and oversaw what retail selling they did at a local farmers market.
She eventually left the farm and built a career in aviation. But she came back home about six years ago and resurrected the farm’s apple growing tradition.
Her father had ceased packing apples in 2004, but there were still large trees standing. Haverty had those trees turned up, then fenced in a 10-acre parcel and planted dwarf trees.
“I enjoy apples,” Haverty said of her decision to get back into the apple business. “I enjoy seeing them grow and selling them.”
Today there are six acres planted to 22 varieties, 17 of which are currently producing.
The orchard is entirely retail — a U-Pick operation serving the New River Valley and the surrounding communities.
Doe Creek is open Saturday through Tuesday. On Wednesdays Haverty cleans the orchard floor to keep down the population of yellow jackets and bees as well as remove the temptation for bears to breach her fence in search of fallen fruit. On Thursdays she presses cider. On Fridays she bottles cider, then the doors open to customers Saturday morning.
Weekends are the busiest, but customers, including families with children not yet old enough for school, visit the orchard on Monday and Tuesday too.
The orchard is particularly popular with families, as children can easily pick from the dwarf trees. Keeping the orchard floor clean and the stinging insect population down is key for this group of customers.
“Parents get upset when their kids are stung,” Haverty said.
Haverty planted the orchard with the varieties ripening in order from side to side, to make it easy for her customers to find the rows of trees with ripe apples.
Out of the varieties planted, York and Candy Crisp show the most vigorous growth. They require a bit more cleaning and pruning but the varieties are popular.
York is Haverty’s own favorite variety, with Gold Rush a close second.
Cider is in such demand that one weekend Haverty sold out and took “cider futures,” or pre-orders, for the following weekend. She also makes and sells apple butter.
The cider is made with a continuous press which Haverty’s father bought in 1981.
On Sundays, Haverty opens a downstairs portion of the old pack house for wine tastings. Called The Barrel House, it’s in a part of the building that used to be storage. Its walls are now fronted with old packing crates, both whole and in pieces, providing a very authentic look.
Crates are also used as planters and cocktail tables on a terrace outside of The Barrel House.
The wine is a private label made for Doe Creek by a Virginia winery specializing in wholesale production.
The wine is also a popular beverage choice at the numerous weddings which take place at the orchard.
The idea for hosting weddings came from Haverty’s daughter when Haverty was trying to decide whether to keep the pack house or tear it down. Today, the upper level of the pack house has been renovated into a banquet space, with room for dining and dancing.
Someday, those couples may come back to orchard and renew their vows, the same way Haverty renewed her family’s apple growing tradition.