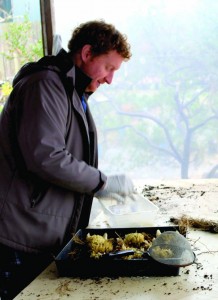 by Kelly Gates
Phil Van Soelen and Sherrie Althouse spent a portion of the late 1970s working at a nonprofit native plant restoration and environmental education organization, growing native plant species. Their work there prepared them for what they do today, owning and operating California Flora Nursery, a native plant business located just north of Santa Rosa, CA in the town of Fulton.

According to Van Soelen, the number of native plants in California is so vast that he and his business partner could never get to them all.
“There’s just no end in sight,” Van Soelen told Country Folks Grower. “We could spend the rest of our lives exploring all of the species and cultivars and still have plenty to discover yet. And, we have a young protégé here, Josh Williams, who might never get to all of them in his lifetime either.”
The fact that there are too many to consider doesn’t frustrate Van Soelen, Althouse or Williams. Instead, it motivates the team to propagate and sell as many of the varieties that make the most sense for landscaping and gardening today as they can.
One plant in particular meets the demands of many California residents — Manzanita. The species is native to the Sunshine State and is highly drought tolerant, a characteristic that is necessary in a place where drought is common and water usage is frequently mandated.
“We’ve been big fans of Manzanita for years,” noted Van Soelen. “There are over 50 species of Manzanita that grow naturally here in California and because they require such little water, there are perfect areas like this where water is becoming an increasingly scarce resource.”
Monkey flower is another popular item at California Flora Nursery. Sherrie collects cuttings each year from a large cluster that grows naturally near her home.
Nearly all of the propagated plants at the nursery are started using seeds or cuttings taken from the staff’s own gardens or from roadside patches, many of which Van Soelen expects to disappear in the future.
“California has one of the most diverse offerings of native plant varieties in the United States,” he said. “But the overall numbers are dwindling as land is developed for agriculture or as road crews inadvertently whittle away at them while working on projects or maintaining roadside spaces.”
This unintentional elimination of native plants is one reason the staff at California Flora Nursery works so hard to convince customers to incorporate them into their landscapes and gardens. Fortunately, overall awareness of environmental concerns and consumer interest in creating natural habitats has helped the nursery thrive since its inception in 1981.
“Natives have become more popular as people developed an interest in creating habitats for attracting, birds, butterflies and other wildlife rather than just having plants in their landscapes that are pretty,” explained Van Soelen. “The Buy Local movement has also helped our business. People want to support us as a local nursery, but they also like the idea of purchasing plants that are sourced locally, grown locally and naturally fit into the local environment.”
The long list of natives grown and sold at the nursery includes everything from vine maples, California buckeyes and California angelica to Sonoma Manzanita, western columbine and Pacific madrone, among many others.
The plants are sold mostly in 4 in. pots or 1 gallon sizes. Some however, are as large as five and seven gallons, depending on the variety and maturity at the time of sale.
Growing such a wide assortment of natives requires surprisingly little space. The owners have been utilizing the same 15 ft. x 35 ft. greenhouse since they first began working there.
The building was once used as a car garage and was retrofit with a light-transmitting greenhouse roof and hot water bottom heat system, all of which function perfectly for native plant propagation. A standard refrigerator is used to store and stratify seeds collected from all over Sonoma County for stratification.
Once the seeds or cuttings have taken root and are hardy enough to be moved, they are stored in a series of cold frames until the weather is moderate enough for them to be moved outdoors.
“We are constantly moving things along as quickly as we can so we can get to as many different varieties as possible each year,” said Van Soelen. “And, we want to have enough time to worry about marketing the plants properly, including displaying talking cards at the point of sale so our customers can read about each variety.”
In recent years, more emphasis has also been placed on creating small vignettes or displays at the nursery. Althouse and Williams have been behind this endeavor, stocking complementary varieties together so shoppers can easily see which ones are best for woodland gardens, full sun spaces and other environments.
Van Soelen and Althouse also spend time mentoring Williams, who is likely to become successor of the business when the founders eventually retire.
“We’re in our late 50s and early 60s, but Josh is young yet and he is so passionate about native plants,” said Van Soelen. “At times, we have to practically restrain him so we don’t end up with too much plant material. But that’s a good thing, especially since we hope to leave California Flora Nursery to Josh when our time here is done.”
When that happens, the owners expect that he will continue their legacy, putting an even bigger dent in the expansive amount of natives they believe can and should be utilized more in local landscapes.