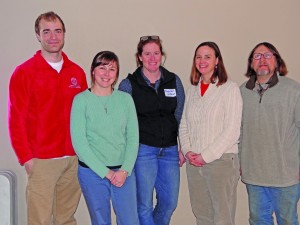 by Elizabeth A. Tomlin
October 2015 will mark the first time an FDA court mandated rule will affect producers of fresh produce in the marketplace.
“This is coming!” said Produce Safety Alliance Program Director Elizabeth A. Bihn, Ph.D. “Don’t panic, but do something now so it doesn’t hit you like a freight train when it happens!”

Bihn was speaking at a 2015 ENYCHP Good Agricultural Practices Farm Food Safety Training Program.
“In December of ‘09 the FDA said, ‘We’re going to make regulations because growers are not following the voluntary guidelines and we’re having outbreaks.’ We now have the first ever regulation of produce coming in October because of the outbreaks.”
Several attendees reported they were receiving pressure from buyers to have a third party certified audits done, proving that their farms are following documented food safety programs.
Chain stores that advocate buying local produce are among markets requiring producer audits, with restaurants, farmers markets and consumers following close on their heels.
“These industry mandates are the grocery stores telling you, ‘have an audit or I’m not buying your stuff!’” remarked Bihn, noting that some insurance companies are now offering incentives to audited farms and many may soon require third party audits before issuing insurance to growers.
Bihn pointed out that the focus is on minimizing risks — not eliminating them. “Food safety begins on the farm; every farm has food safety risks and your actions directly impact food safety.”
Statistics show approximately 48 million people get sick from foodborne illnesses each year, with 128,000 hospitalized and 3,000 fatalities. Sixty percent of these illnesses come from produce and should have been prevented. Children, elderly and the immune deficient are the hardest hit.
Every producer should be able to assess risk and manage it or appoint someone who can be responsible to do so on their farm. Prevention is the key to food safety.
Topics covered in the GAP training workshop included personal hygiene and sanitation of all workers, management included. Workers should be trained to wash their hands with soap and running water (the 20 second rule applies here) after using the toilet and before handling produce. Hand sanitizer is not acceptable. Clothes and shoes should be clean when handling produce. Cross contamination is known to be a serious problem. Hygiene and sanitation during harvesting, sorting, packing and transportation of fresh produce are critical.
The more your produce is handled, the higher your level of risk.
Water is another risk to be assessed. Agricultural water is used for all aspects of produce production and should be tested for pathogens every few weeks during the growing and harvesting season, especially water used for irrigating, misting and washing produce and leafy vegetables or produce with topographical surfaces, such as strawberries or cantaloupe.
Bihn said three things to keep in mind are the quality of the water, how it is applied and the timing of the application. For instance, the longer the period of time between application and harvesting, the bigger reduction of risk in the field.
Manure and the use of compost are also concerns to be considered. They should be handled properly and meet industry safety standards. Fields can be contaminated by manure runoff from livestock pastures.
All animals — livestock, pets or pests — should be kept out of production areas, especially sorting and packing and storage areas.
“Some animals are known to carry more pathogens than others,” said CCE Fresh Market Specialist Robert Hadad, MS, noting that birds are associated with Salmonella, ruminants with E. coli and reptiles with Salmonella.
Cats are great mousers, but they are known to carry disease and should not be allowed in packing sheds, washrooms or storage rooms. They can also contaminate greenhouses. And while dogs can be very effective at controlling wildlife, they should be kept out of the fields for several weeks before harvesting, allowing ample time for fecal matter to be broken down by natural elements.
0002000004F5000010154EF,Workers should be trained to report any evidence of wildlife to the farm manager. Steps should promptly be taken to eliminate wildlife exposure to produce. Hadad reported good results with using predator decoys to scare off deer and woodchucks.
Packing houses should be checked frequently for places where rodents and insects can enter. Floors, windows and walls should be repaired as needed to insure successful food safety plans and guidelines. Counters, shelves, containers and anything that may come into contact with produce should be kept sanitized.
There should be no discarded produce debris or garbage or standing water kept anywhere near the sorting house, packing house or storage area. All discarded produce should be cleaned out and dumped daily.
“It’s using common sense,” said Hadad.
Erik Schellenberg of Orange County CCE spoke about food safety in transporting produce. He reminded attendees that vehicles used for transporting should also be examined for anything that may cause cross contamination. Some farmers use their trucks to transport animals or garbage and use the vehicle to transport produce. Vehicles should be inspected and cleaned prior to loading produce. Temperature and humidity during transportation will affect food quality.
Schellenberg spoke about the importance of traceability, which in involves the ability to track food back to their source. Documentation should include farm identification, date of harvest, produce handlers and date of  delivery. Lot numbers and field identification are advisable on large farms.
Food safety plans should be written and documented, records should be kept and filed. All workers need to be trained to follow all farm food safety plans. Documentation of training should be kept along with a record of the plan.
NYS Dept of Ag & Markets Farm Products Grading Inspectors George Spohn and Emily Wallace were on hand at the workshop to answer questions about how audits take place and what is expected. “The checklist is point valued,” explained Wallace. “Eighty percent must be met.”
Ongoing management of the food safety plan is expected after the audit is completed.
Bihn said the FDA rule will affect farms by size and income. “Large farms will have two years to comply,” she stated.
For more information about food safety plans or GAP training contact Elizabeth Bihn at 315-787-2625.
For more information about 3rd party audits contact George Spohn at 518-457-2090.