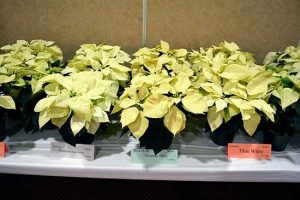 by Steve Wagner
Pennsylvania’s 2016 Poinsettia Trial moved from Schantz Greenhouse in Zionsville, where it was held last year, to Shady Maple Smorgasbord and Banquet Rooms. Ten years ago, Delaware Valley University abandoned its trial, and last year was the resumption of that trial. The difference between this year’s venue and the greenhouse is that only representative plants were on view this year on lengthy table arrangements, as opposed to thousands of plants covering floor and bench space at the greenhouse. But that’s okay because the message got across. Moreover, pleasant restaurant and coffee aromas leached into the trial area.
Three companies of those who presented on Nov. 2 will be discussed because there was much overlap and similarity throughout, each company touting their strengths and plants that are popular with their respective publics. As was evident at last year’s trial, bright reds remain the overall popular favorite; pinks, yellows, whites and poinsettias (though red) with curly leaves remain as novelties. But those novelties do have their devotees. Some attendees harbored that same dedication to whites, yellows and expressed a new experimental hybrid lime green poinsettia that is not to officially appear yet for a year or two. It was resting on a table by itself. Spectators stood for long periods of time studying this one, as though it was from another planet.
The first presenter was Jason Twaddell, a representative from Ball Floraplant and Selecta Products. Selecta’s early season favorites are: its Christmas Glory series, Christmas Morning, Christmas Eve, and Christmas Joy. In this neck of the woods (Lancaster PA, along with the northeastern U.S. in general), poinsettias are decidedly Christmas items. In warmer climes, they are year-round and grown outside. “It really comes down to three things,” says Twaddell. “V-shaped habit, so we want something that has a really nice, well-branched structure on our plant that will be very producible and very shippable. It also comes down to long-lasting cyathia and shelf life. And third are strong roots.” It is important, he says, to have a strong foundation under the plant. “Good roots grow good shoots!” In a power-point illustration showing week 49 of Selecta Reds in Connecticut, Twaddell described the Christmas “Eve” as having “the most upright V-shaped architecture in any of our poinsettias, and it lends itself to being the most utilized for higher density productions, and is the most shippable poinsettia we have.”
Thomas Nass, Beekenkamp’s North American Product Manager, discussed how the Netherland-based company is providing newer genetics to expand our choices. Acknowledging that Beekenkamp is newer to the poinsettia market, Nass went on to make his case for why you might want to consider his company. “The varieties developed by Beekenkamp have undergone rigorous testing before being commercialized,” he says. “The plants and the company are working to produce high quality plants with integrity, and need to perform at a high level in order to be released by the company.” What does Beekenkamp look for in their breedings? Color, for one thing. Just that initial impression means a lot, “but actually that’s a small part of what a poinsettia really is. Cyathia and plant shape, is a big portion of that; a good V shape. Does it have good genetics, and good rooting? Good shelf life? In other words, things creating a good experience for the grower and, subsequently, the consumer, so they’ll keep wanting to come back and getting that product year after year.”
Presenter Angela Mekjian talked about Dummen Orange poinsettias represented in the trials as Ecke Ranch and Red Fox varieties. In an argument for possibly the best catalog, Red Fox poinsettias can be seen for half the catalog. Then when you flip it over, Las Mercedes, El Salvador Ecke poinsettias take over, the latter flirting more with whites, pales and pinks as opposed to the Red Fox blood reds. Catalogs can be a delight to read because the plant companies have to come up with names of plants that will sell. For example, in the Red Fox ‘Reds & Families’ section are Euroglory and Protégé. Of Protégé the description reads, in part, “Strong root system supports use of ebb and flood systems. Suitable for cold finishing. Rated ‘no heat delay’ in trials.” A master gardener pulled me aside during a break and we walked into the poinsettia display room. Isolated on a table were two plants from the Ecke Ranch labeled simply Experimental 1512. They were poinsettias with a yellowish leaf and deep green base leaves. The MG said this would not be sold for a year or two yet. Later I asked one of the most brilliant men I know about such experimental plants. Are there patent issues involved, I wanted to know. Possibly, he said. More likely, though, he deemed it a simple ‘corporate secret’ scenario. I had also been told that some plant breeders hope to be able to dictate color taste to the plant-buying public. Anything to that? A dream of the ages, according to my intelligent friend.
Stay tuned!