Grafting for the future 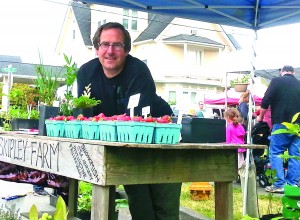 by Sally Colby
After he finished college, Gil Schieber had several reasons to leave the East Coast. His brother lived on the West Coast and several college friends wanted to travel, so in 1980, Schieber and some friends set out on bicycles and headed west. As he traveled, Schieber worked on some farms and picked up a few more cyclists along the way. His trip ended at a truck farm in the Kent Valley of Washington state, where he worked for a while.
“I like it here,” said Schieber, a graduate of Delaware Valley College with a degree in horticulture. “It’s a horticultural mecca. It’s temperate, almost subtropical. This is where I started to collect and grow plants.” However, Schieber noticed there wasn’t much rainfall over the summer and he watched numerous plants die.
As he experimented with plants of all kinds, Schieber worked in a large, commercial orchard in eastern Washington and at an arboretum. He also worked extensively with urban agriculture and helped people learn to grow food. During that time, Schieber successfully propagated and grew more than 5,000 different species. Eventually, Schieber purchased farmland 30 miles north of Seattle, and in 2009, purchased 3,500 rootstock and completed 1,500 whip and tongue grafts. He also obtained scion wood from a cousin in Pennsylvania, from Washington State University’s Mt. Vernon research station and from a fellow orchardist who brought stock from other orchards.
“That was the start of my apple collection,” said Schieber. “The 3,500 rootstock represented about 80 to 90 different varieties, and has now grown to 165. I’m grafting and doing a lot of double-grafting, I did my original stock on Bud 9, which has a red leaf that makes it really easy to see if the graft failed. This year I bought Mark, M27, M111, M106 and P22.
Mark was released for commercial use in 1985. Trees are somewhat smaller than those grown on M26, and can be grown as free-standing trees. Young trees on Mark produce heavy crops that can result in stunted growth without proper thinning.
“I’m doing some double grafting and getting a dwarf, free-standing tree,” said Schieber. “Double grafting is typically 111 rootstock with an interstem of M27, M9 or Bud 9 — something that’s eight to 12 inches, then the scion goes on top of that. The main reason for interstem work, the double graft, is to get a free-standing dwarf tree.” Schieber says when he’s grafting, he doesn’t always know what the compatibility will be, but expects he will learn that as his trees mature.
In order to determine what works and what doesn’t, Schieber keeps notes on each graft. “There are some things I haven’t gotten to, like whether the Winter Banana interstem will be compatible with some pears,” he said. “It’s putting pears on apples with the Winter Banana interstem.”
Schieber has several favorite apple varieties, including William’s Pride, a medium to large, dark red, early-maturing variety that’s resistant to scab. It’s a firm-fleshed summer apple that stores fairly well, and retains flavor on the tree post-maturity.
Liberty, another favorite, is known as an early-bearing variety that sets a heavy crop. Liberty has good resistance to scab and cedar apple rust, and some resistance to mildew and fireblight. This cultivar’s disease resistance originates in part from the crab apple variety Malus floribunda, a distant relative. The appealing flavor of liberty is likely due to its relative Macoun, which is popular among those who favor heritage cultivars. Among Schieber’s other favorites are September Wonder™, Hudson’s Golden Gem and Beni Shogan, a Fuji mutation known for its ability to ripen in cool climates.
From among the apples produced by his mature trees, Schieber determined that about 40 varieties were acceptable last year. “I keep them in a 40 degree garage because I’m interested in seeing which ones will be good in April without too much care or chilling,” he said.
In addition to his ongoing work with apples, Schieber propagates and sells nursery stock including blueberries, black currant, table grapes, strawberries, marionberry, thornless blackberry and kiwi arguta. Schieber also founded and currently operates Borealis Landscape and Design, with the goal of using native species for low maintenance and longevity.
Although Skipley Farm isn’t certified organic, Schieber uses organic growing practices. “We’re getting compost from with Washington State University and using some of the excess compost that’s coming out of yard waste,” said Schieber. “We’re participating in a compost trial to establish a base price for farmers and get more use out of compost.”
As far as challenges from insect pests, Schieber says the spotted wing drosophila (SWD) has been a problem. “This is a mecca for growing berries, but the SWD is taking everything out,” said Schieber. “We’ve learned that we just have to pick every day. Last year, we got a grant for research on the spotted wing drosophila. Between the blueberries, strawberries, brambles we used four different traps placed at different heights. We counted insects and reported every week.”
Schieber is dedicated to creating and maintaining habitat to support aerial predators. “We’re slowly building nectary sources around the farm,” said Schieber. “My whole pitch is to increase diversity. There’s a lot of dead wood and brush piles here, and I’ve seen solitary bees in rotting wood piles.”
Skipley Farm maintains a small CSA and sells fresh produce at two area farmers’ markets. Schieber says consumers in his area are price conscious, so it’s been difficult to get top prices. This year, Schieber is growing more than 200 tomato varieties, which will provide customers the opportunity to sample tomatoes they likely haven’t tried in the past.