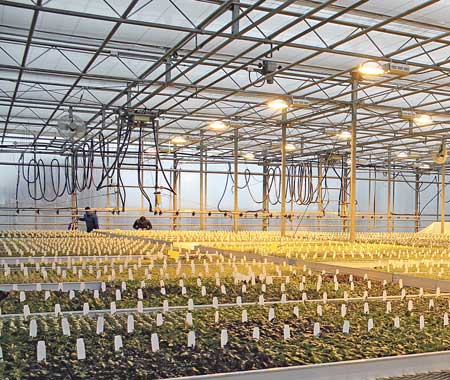 Currey said that while there is no “day-length fits all approach,” strategies for manipulating greenhouse photoperiods are available to manage your crop’s growth for best marketing profitability.

Photoperiod is the amount of daylight available to your crop. However, he explained, dark hours are what signal plant responses.

In short-day plants (SDP), such as chrysanthemum, marigolds and poinsettia, flowering occurs in response to short daylight hours and long hours of darkness.

In long-day plants (LDP), such as pansy and petunia, flowering occurs in response to long daylight and shorter hours of darkness.

Some plants are considered as day-neutral (DNP), producing the same results in either circumstance.

“We can control flowering by managing the day-length for many species,” said Currey.

Currey explained that SDP can be affected by “light pollution” during dark hours by outside lights, such as security lights, street lights or even headlights from local traffic. These disturbances in plant rest can cause delay in flowering.

Installing blackcloth (or blackout cloth) is the only way to assure darkness for these crops.

On the other hand, in the case of LDP, there are two techniques to extend day-length; adding day-extension lighting or interruption of dark hours.

Plant dormancy can also be postponed by using these methods.

Research has shown that interruption of darkness during the hours of 10 pm and 2 am, will promote a long-day response.

Incandescent lighting is commonly used, as it is cost efficient, easy to install and has a good balance of red and far red light.

One drawback of incandescent lighting is energy inefficiency. They also produce radiant energy.

“These can consume a lot of energy to provide a little light intensity that they do provide to our crops,” Currey remarked.

Compact fluorescents use less energy and have a longer life span. “However, one of the problems is, there’s little-to-no far-red light in these lamps.”

Although they can be more expensive, LED lamps have a number of advantages including energy efficiency and longer life span.

“While the up front and initial investment in LEDs may be expensive, the long life combined with the low energy consumption makes them a very economical alternative.”

LEDs are also reported to have a good blend of red and far-red diodes for photoperiodic flowering.

High pressure sodium (HPS) lamps are another option that can be adjusted for use. These high intensity lamps are frequently used for greenhouse supplemental light due to their high light output. Currey recommends attaching low intensity HPS to a boom.

“Photoperiodic lighting only requires two micro-moles or ten foot-candles to get a response,” said Currey. While this may increase stem elongation due to far-red light, and generally will not enhance plant weight, dry mass or quality, it will control flowering.

“Alternatively, supplemental lighting is light that is an intensity that has an appreciable effect on photosynthesis. So…30, 40 or 50 micro-moles of light, that type of light intensity is going to be enough that it’s going to enhance the plant’s mass, enhance that plant flowering. It also may hasten flowering due to that facultative irradiance response. It also may speed that rate of development depending on the type of lamp you’re using.”

However, Currey cautions, individual plant species and even cultivars of the same species, have different requirements.

In an in-depth biological presentation, Roberto Lopez explained how light quality is broken down and absorbed, and recommended best practices required for plant varieties.

Lopez said that light quality is basically the number of photons that are recognized by plants, stimulating them to grow.

“Phytochrome is a major photo receptor of plants and is really responsible for light detection. It consists of two forms,” said Lopez.

Brief exposures of white or red light can cause a response.

Lopez reported on studies done with a variety of plants and their responses to different light sources.

He stressed that light sources and the amount of red and far-red provide different results per crop and even within different cultivars of the same crops.

Most edibles need to be kept in a leafy, vegetative state and early flowering is not desirable.

LDP include common herbs, such as dill, cilantro, sweet marjoram, Greek oregano, peppermint and spearmint. Spinach, arugula and lettuce will also flower when exposed to long hours of light.

Some SDP include peppers, cucumbers, several types of basil and tomatoes.

Avoid early flowering in greenhouses where less than 12 hours of daylight is advised, with blackout cloth.

Temperatures above 80˚F will impact premature bolting in spinach and lettuce.

Greenhouse temperatures should be controlled through shading, venting and evaporative cooling to prevent premature bolting.

Chilling root cells in lettuce to 65˚F in hydroponics helps to prevent bolting.

When you are unable to maintain cooler temperatures, harvest earlier to preserve marketability in these crops.

Cultivars respond differently to temperatures and should be monitored for sensitivity.

Continuous lighting has become popular with some greenhouses. However, Mattson cautions that tomatoes and peppers must have dark hours to prevent physiological disorders. Tomatoes require six hours of total darkness and peppers require four.