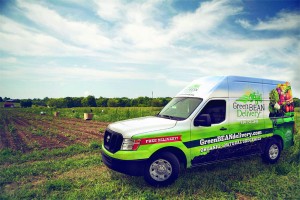 by William McNutt
Since 2007 urban residents of four Mid West metro areas have been able to have food product placed on their door step or even at their place of employment by Green B.E.A.N. (Biodynamic, Education, Agriculture, and Nutrition). Delivery is on a weekly or bi-weekly basis, eliminating most trips to local supermarkets. Green B.E.A.N. was started in Indianapolis, IN, by the husband and wife team of Matt Ewer and Elizabeth Blessing, after they returned from a year on the West Coast. Matt worked in a local CSA, acquiring basic knowledge of the food industry, including how a product made its way to consumers. They returned to their home area, convinced this could be accomplished on a larger and more efficient scale. Tony Fairchild, general manager of the central Ohio distribution center, headquartered in Columbus since 2010, says the primary focus was to make food more affordable as well as nutritious, customize the delivery, and allow more choices. The concept of fresh, local, and primarily organic, is central in all locations, especially with produce in season.
Emphasis is on organically grown food, or at least food produced under the organic principles of no chemical additives included in the production process. This includes dairy, livestock, and poultry, as well as specialty crops. Those who sign up for the program are given their choice of organic, sustainable/minimum chemical application, or conventionally produced. There is no sign up fee or contract, customers must pay at least $35 for an order on a sliding scale up to $48 for greater content on a weekly or bi-weekly basis, depending on the product mix determined by Green B.E.A.N. Delivered in distinctively designed green containers, contents are determined by seasonal availability, and often include recipe folders utilizing current contents. Payment is made by credit card and automatically deducted after each delivery. It is the customers responsibility to notify when on vacation, or to defer or stop delivery during different times of the year, or to leave the program.
Fairchild said the company will likely concentrate in their current area — headquartered in Indianapolis — with collection and distribution centers in Northern Kentucky at Louisville, Cincinnati and Columbus, with satellite deliveries from these locations to nearby cities, such as Dayton and Lebanon; Muncie, and Ft. Wayne, IN. Consideration will be given to South West and Central Ohio expansion of deliveries made from current distribution center warehouses. Every effort is made to secure fresh, locally grown produce, which in areas served can be done about eight months a year. In Columbus a staff of 20, including managerial and record-keeping personnel, takes care of packing boxes prior to delivery, unless customers wish to pick up at the warehouse.
Every effort is made to secure fresh, local produce from 6-12 local growers in season, plus cold storage apples in the off growing season, even bananas and oranges from Mexico and South America, Florida and California. In addition to fruits and vegetables, non-seasonal dairy and meat products can be provided locally year round, as well as winter stored root crops. As locally grown produce becomes available, out-of-state orders are immediately cut back. Among the local produce growers working with B.E.A.N. are Northridge Farms, Wayward and Van Scoy, who concentrate on organic production, plus Jorgensen Farms. A unique feature of Green B.E.A.N. is that the no contract philosophy is carried out with suppliers or customers. Tony Fairchild visits regularly with growers, particularly in January-February, when plans for the next season are being set. He wants to know what will be grown, any new crops planned, and if not organic certified, will production follow organic guidelines, be handled on sustainable principles, or the grower’s other plans that might fit into the Green B.E.A.N. philosophy.
Green B.E.A.N. Delivery was started to take advantage of the ever-expanding trend toward locally grown fresh food. Ewer and Blessing saw this trend as helping secure more healthy nutrition, greater promotion of sustainable farming, and existing community food networks. The internet age has made it possible to communicate easily and cheaply, particularly among the increasingly health conscious millennial generation, those under 35 with growing families, now labeled the X and Y generation.
Since their beginning this organization has invested $5 million into local food economies, donated 116 tons of food to hunger relief agencies, and now serves 12,000 customers from the four distribution points. Sales of locally grown foods in the U.S. from all sources, include direct marketing such as the B.E.A.N. type, farmers markets, supermarkets and other types of grocery stores, or increasingly through fast food or conventional restaurants, is now hovering around $8 billion, after recovering from a 2008 slump induced by the recession.
The definition of “local” is rather variable. USDA defines it as product sold within 400 miles of where it originated; Ohio and most Midwestern states prefer 150 miles from the growing area as a satisfactory definition, while it is not uncommon at municipal farmers markets to see signs indicating produce was picked the day before or that morning.
The B.E.A.N. company keeps customers informed through a blog which can be sourced by interested parties and so far has been all the commercial type advertising needed. There is little question that consumer buying habits are changing, a trend Green B.E.A.N. is catering to. The younger generation is not only looking for fresh and local, they are willing to shop at unconventional outlets for unconventional products, and do it electronically more than once a week, in order to acquire these different choices. As a one stop intermediary between supplier and consumer, able to serve both new and older generations, Green Bean is in the forefront of this new and different type of marketing system.