Grohsgal turns coldest winter in decades to his advantage, further selecting for cold-hardiness in winter crops 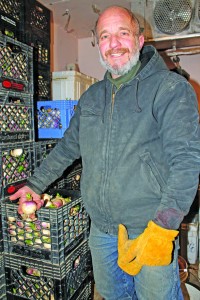 by Karl H. Kazaks
LEXINGTON PARK, MD — Most winters, the fields at Even’ Star Farm are a riot of different shades of green, full as they are with the winter crops Brett Grohsgal grows for his CSA and wholesale customers.
This year was a different story.
Southern Maryland’s coldest winter in 30 years — following a cooler-than-normal summer — drastically impacted the yields at Even’ Star. It wasn’t because the species planted weren’t cold-hardy, on the contrary, Grohsgal has been breeding crops for that trait for over 20 years.

“I breed our crops to make it down to about six degrees,” Grohsgal said. This past winter, his part of St. Mary’s County — his farm is very close to the Chesapeake Bay — had seen temperatures that low or lower on many occasions.
In fact, Even’ Star specializes in what other growers consider the off-season. Grohsgal usually plants about 25 acres for winter production. His winter CSA has a waiting list.
The farm’s winter CSA program has six off weeks to account for holidays and extreme weather. Most years, Grohsgal only uses three of those off weeks, one at Christmas and two when the weather drops below 22 degrees for three straight days (typically the cutoff for when fields stop producing). That leaves three unused off weeks for Grohsgal to use at the end of the winter season, giving him a head start on spring planting.
This year, however, the farm had used five off weeks by mid-February.
“In the winter we usually average a harvest of 220 bushels per week from open fields, 150 bushels in a bad week,” Grohsgal said in February. “We haven’t had an open field harvest in three weeks. We haven’t had a 150-bushel harvest since December.”
To provide produce for the CSA’s 230 subscriber families, Grohsgal has had to rely on stored crops like sweet potatoes, as well as greenhouse production and value-added processed foods.
For example, one week Even’ Star subscribers received mesclun, turnips, sweet potatoes and hot pepper jelly. In a typical year, a mid-winter delivery would an assortment of brassicae including kale, tatsoi, various mustards, miznua, collards and turnips. The majority of those crops are grown from seeds Grohsgal has bred himself.
Even’ Star has two greenhouses. Four years ago, Grohgsal stopped heating his greenhouses, and he’s glad he did. Not only does it save on his fuel cost, it has also allowed his greenhouse crops to adapt to colder conditions.
Grohsgal has thought about adding more greenhouses, but is content with just two.
“The dilemma of cropping year-round,” he said, “is you don’t get downtime. I’m already working 70 hours a week in the winter. With more greenhouses and higher production, I’d have even less time off.”
Grohsgal’s first experience with breeding a cold-hardy crop came over 20 years ago when he crossed Turkish arugula with the line of arugula his mother used in her background garden.
The line of arugula was so successful — one year, a three-acre field in flower withstood a March ice storm with just five percent mortality — that Grohgsal eventually marketed its seed commercially. It was known as Even’ Star Ice-Bred arugula.
It won’t be available this year, however, as Grohsgal will retain all of the seed he harvests.
Producing vegetables year-round requires thoughtful site selection. Winter crops need well-drained soils, Grohsgal said.
Grohsgal and his wife bought the farm in 1996. In addition to their CSA and wholesale customers, they also sell at two farmers’ markets, one near Washington, D.C., and one in southern Maryland. Their farm is organic.
In the summer, they plant just 12 acres for field production, because the warmer months bring both more production per acre and more competition in the produce market. Grohsgal uses summer cover crops on his fallow winter ground, included sorghum-sudangrass and Japanese millet.
This year, for the first time, Grohsgal has seen deer damage on his strawberries. Even though (with a kill permit) he removes between 18 and 36 deer per year, he may put up an eight-foot movable fence around his strawberries and sweet potatoes.
Grohsgal has co-authored two cookbooks, one designed for CSA operators to give to their subscribers to know how to cook and store produce, the other more focused on cooking foods from the winter garden.
This past year is one Grohsal will likely long remember.
“The ecosystem never really warmed up,” he said, as a cool summer was followed by a cooler autumn.
“We had two days of 19 or below by late November. That’s unheard of around here.”
And then the winter, as brutal as it was.
There is a silver lining, however.
Despite the poor yields and mortality, Grohsgal said, “A winter like this is great for selecting for hardiness.”