Cedar-apple rust is caused by the fungus Gymnosporangium juniperi-virginianae. To complete its life cycle, the fungus must infect apple or crabapple and an alternate host. Alternate hosts most commonly include native red cedar (Juniperus virginiana) and Rocky Mountain juniper (J. scopulorum).

In the spring, orange jelly-like horns arise from gray to brown colored fungal galls on the branches of infected cedars and junipers.

These horns produce wind blown spores, which infect apple and/or crabapple trees up to three miles away. 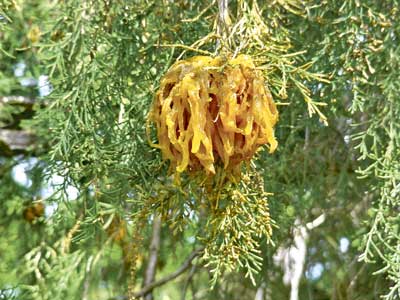 Symptoms on apple and crabapple initially appear on the upper leaf surface as small yellow spots, which later enlarge and turn orange.The fungus then grows through the leaf, causing yellow-brown lesions to appear on the underside of the leaf. In late summer, these lesions form small, horn-like structures, containing rust-colored spores which are wind blown to susceptible cedars and junipers. There they start new infections.

In most cases, apple and crabapple trees are not seriously damaged by cedar-apple rust. However, severe defoliation can cause reductions in fruit size and weakening of the tree.

To avoid getting cedar apple rust, spray myclobutanil (Rally or Immunox) after the flower petals fall and continue for six weeks after bloom. Follow label directions. Removing cedars that are growing close to apple trees will not eliminate the cedar-apple rust fungus, since the spores can blow from up to three miles away.

For trees that have dropped their leaves due to cedar apple rust, take soil samples and add the recommended lime, fertilizer and water thoroughly to stimulate new growth.