Grower Guidelines: Way down yonder in the pawpaw patch

by Carl Cantaluppi
The pawpaw is the largest edible tree fruit native to the United States. It is the only temperate member of a new- and old-world tropical plant family (Annonaceae, Custard Apple family) that includes cherimoya and sweetsop. There are nine species of Asimina. The common pawpaw, Asimina triloba, has the greatest potential for commercialization. It is widely adapted with a native range from Florida to Michigan and as far west as Nebraska. 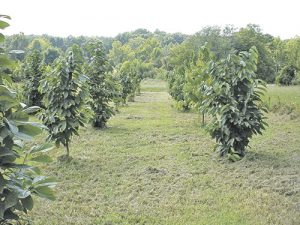 It is a common species in Virginia, found near waterways and low, moist draws in the mountain drainage areas. Though technically a tree fruit, it can stretch the accepted definition for “small fruit” by plant size due to its natural bush-like and suckering habit. In most situations, it is easily trained into a single-trunk small tree — pyramidal in form — which can reach 15 to 20 feet in height.
Historically, pawpaw was a well-known and much utilized fruit in the eastern U.S. It was an important food crop for both Native Americans and early settlers. Today it is a local specialty, gathered in the wild by enthusiasts and grown by hobbyists in backyard orchards. Over the years, wild selections have been collected and named and many of these cultivars are now available through commercial nurseries as asexually propagated (grafted) stock.
In its ideal native habitat, pawpaw is characteristically found in the deeper, rich soils of river-bottom woodlands, growing in the shade as an understory tree. Because of root suckering, it usually forms clumps or thickets. Its leaves are long, drooping, dark green, and turn a brilliant yellow in the fall. The fruit (a true berry) may weigh up to a pound, is oblong to cylindrical in shape, one to six inches long, and one to three inches in diameter. Fruit is borne alone or in multi-fruit clusters, which can resemble a “hand” of bananas.
It has a strong floral and fruity aroma and its flesh is creamy textured, usually bright yellow to orange in color. Typical of its tropical family, the flavor of pawpaw is best described as richly complex, a mixture of papaya, banana, mango and pineapple. Flavor can vary greatly among selections, with sweetness and minimal aftertaste characteristics defining a high-quality cultivar.
The crop is well adapted to the Eastern U.S. climate and soil conditions. It is relatively free of insects and diseases. Pawpaw is adapted to humid temperate zone growing conditions. It is hardy to the USDA growing zone 5 (-20°F or -29°C) and needs at least 400 hours in annual chilling requirements (time exposed to 35° to 45°F during winter months, depending on the cultivar). This is a low chill requirement compared to other tree fruit species (apples 800 to 1,700 hours), and once met, the trees will begin to flower early in the spring. A long, warm season is required to mature fruit (2,600 degree days; ~160 frost-free days). Thirty to 35 inches of rainfall is needed annually, with the majority falling in the spring and summer. Contrary to popular belief, pawpaw performs best in full-sun exposure.
The pawpaw is a unique/unusual fruit crop with high nutritional value and potential for both fresh and processed market uses. As a food source, pawpaw exceeds apple, peach and grapes in vitamin, mineral, amino acid and food energy values. The current and primary market for this fruit is as a fresh product in farmers markets and other direct sales outlets.
Though large-scale commercial processing markets do not yet exist, the fruit’s intense flavor and aroma have significant potential in blended fruit drinks, baby food, ice cream and as a substitute for banana in various baking recipes. In Kentucky, various entrepreneurs are utilizing pawpaw as a local cuisine item for restaurants and in frozen custard and ice cream products.
Mr. Neal Peterson, a pawpaw enthusiast and plant breeder, has bred pawpaws for over 25 years. He reintroduced the pawpaw as high-value horticultural crop that can fill a specialty market niche. His efforts have yielded six new hybrid varieties, with fruits that weigh over one pound each.
By 1994, Peterson had selected 18 advanced numbered selections and these were included with 10 named varieties in a set of regional variety trials conducted at 12 universities. He identified three of his selections as superior: Shenandoah, Rappahannock and Susquehanna as of 2003. In 2015, he has named three others; Allegheny, Potomac and Wabash.
To explore the possibility of looking into growing pawpaws as a commercial crop,
I conducted a replicated pawpaw variety trial north of Oxford, NC (northern Piedmont) on a grower’s farm. I looked at four of Neal’s varieties, Allegheny, Potomac, Shenandoah and Susquehanna. The varieties were replicated six times for a total of 24 trees. The trees were planted in 2007, with the first harvest occurring in 2013 and another harvest occurring in 2015. The open flowers are susceptible to spring frosts and this is why pawpaw crops are sporadic. Harvest usually lasts from mid-August to mid-September in Oxford, NC.
In 2013, the Susquehanna cultivar was the leader in pounds of fruit per tree and in pounds of fruit per acre. It also produced the largest average fruit weight in 2013 and 2015, with most fruits weighing over 0.75 pounds each.
Assuming a fruit yield of 1,000 pounds per acre, a grower can make $1,500 by selling 500 ½ pound fruits at $3 each and $2,500 by selling 500 one pound fruits at $5 each for a total of $4,000 per acre at retail farmers markets.
Neal’s varieties are slowly gaining popularity among fruit tree nurseries.
To obtain a detailed research report of my pawpaw variety trial, contact me at 1222 Grangers Rd., Selinsgrove, PA 17870.
Gratitude is expressed to Dr. Anthony Bratsch, for historical, cultural and botanical information in this article that was adapted from his publication, “Specialty Crop Profile: Pawpaw” from the Virginia Cooperative Extension Service.