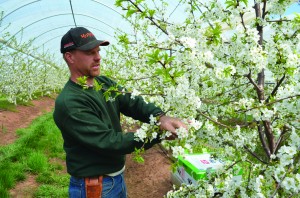 by Sally Colby
It’s hard to miss high tunnels perched on a hillside in the heart of the Adams County, Pennsylvania fruit belt. Although many growers have added greenhouses, high tunnels and covered rows to extend the season for fruits and vegetables, the McCleafs have gone a step further: they’ve put a high value tree fruit crop under cover.
Corey McCleaf and his wife Vicky are the fifth generation to own the Biglerville, Pennsylvania farm, and the sixth to farm it. The farm was acquired by the family in 1888 and has seen eight generations of farmers, and all but one generation has marketed through farmers markets.
“My whole farm is based on trips I’ve taken with the Young Growers Alliance,” said McCleaf, referencing the Adams County, Pennsylvania group that represents the next generation of specialty crop growers. “On one trip, I saw cherries in high tunnels in Berks County. The main idea is to keep birds off the ripening fruit and to prevent ripe fruit from splitting. We sell at seven farmers markets in the Washington, D.C. area, and there are other fruit vendors there. If our quality is better, we can sell more.”
When Corey and Vicky acquired the farm, it was planted in processing apples. “I started from scratch,” said McCleaf. “We removed all of those trees and converted the acreage to high-density plantings, including cherries under cover. The McCleafs are currently farming 50 owned and 100 leased acres. Half of the leased acreage is planted in high-density apples and the rest in processing apples.
Once McCleaf made the decision to use tunnels over sweet cherries, he started planting trees in 2009 and 2010. Tunnels were erected over the trees the second year. “The trees would grow much faster if the tunnels were up the first year,” said McCleaf, “but the plastic only lasts three years. To get production (in the fourth year), we’d have to replace the plastic.” This is year four for the ten varieties of sweet cherries growing in the tunnels, and McCleaf is expecting his first harvest this year.
McCleaf says that cherries aren’t blossom-thinned like other tree fruit. Instead, they’re thinned through pruning. “On Gisela 5 series, they tend to overcrop,” he said. “Rot is the biggest problem, but we won’t have that problem because the cherries won’t be getting wet.”
The tunnel sides can be rolled up to allow air circulation after the unreliable weather of early spring is over. After fruit set, netting will be used to prevent birds from entering open areas including tunnel ends and valleys between tree rows. After harvest, the plastic is carefully rolled up, wrapped in protective black plastic, and stored in the valleys between tunnels. McCleaf says that it takes three workers about one hour to remove and store the plastic from each of the tunnels.
After noticing that honeybees have difficulty navigating in and out of the high tunnels, McCleaf is relying on bumblebees as pollinators. The bumblebees arrive in time for pollination, and live for about six weeks.
In addition to 32 apple varieties, McCleaf’s Orchard is home to a variety of tree fruits including apricots, pluots and Asian pears. In 2012, McCleaf established an acre of high-density pears, using Potomac, Magnus and other disease-resistant varieties. McCleaf referenced New York research in which pear growers were getting 500 bu/acre in the third year, so he’s looking forward to a profitable crop in a relatively short time.
Because small fruits are great sellers at farmers markets, the McCleafs grow blackberries, raspberries, blueberries, strawberries and close to an acre of kiwis. McCleaf says that hardy kiwis are not difficult to grow, but require a lot of trimming because they grow fast. Six acres of vegetables on plastic keep customers supplied with fresh produce throughout the season. CSA and farmers market customers can check McCleaf’s website to find out when various fruits and vegetables will be available.
McCleaf’s orchard is GAP (Good Agricultural Practices) certified, and uses sustainable growing methods including cover crops, mating disruption and the addition of compost to improve soil organic matter. A recently installed solar array provides power for on-farm cold storage.
As a progressive grower, McCleaf is continually looking to other growers for ideas and methods, and in turn, extension personnel and fellow growers visit his orchard frequently. In July, McCleaf’s Orchard will host visitors from the IFTA (International Tree Fruit Association) as part of the group’s orchard tour.
McCleaf noted that several other growers, including Weaver’s Orchard in Berks County and Milburn Orchards in Maryland, have been influential in his management decisions. McCleaf said, “Going on trips with the Young Growers, listening to find out what works — you can take a little bit from everybody’s farm, and that’s what’s on my farm.”
Check out McCleaf’s Orchard on Facebook, or visit on line at www.mccleafsorchard.com.