Growing for all seasons at Front Porch Farm 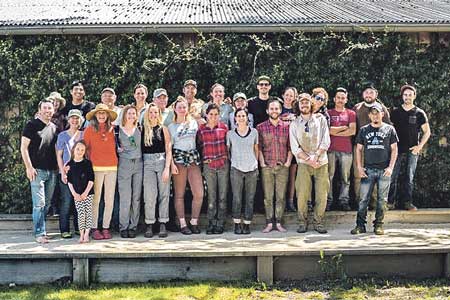 Front Porch Farm lies on the banks of the Russian River in Healdsburg, CA, with gentle hills and rich alluvial soil that provide the perfect environment for a variety of crops including fruits, nuts, olives, vegetables and grains.

This year, produce production manager Eliza Milio and her crew will be growing 10 acres of vegetables over the course of the season. “I was drawn to this place,” said Eliza, who had been farming for about seven years prior to arriving at Front Porch Farm. “I’ve heard a lot of good things and knew about the diversity they practice here.”

Front Porch Farms includes about 100 acres, which allows a unique selection of fruits and vegetables. Because the farm is certified organic, annual crops are grown intensively and rotated with cover crops for insect and disease control. “We’re doing a large-scale crop rotation as well as a smaller scale rotation within the field,” said Eliza. “IPM is one reason we rotate crops, and also for soil stewardship, thinking about the history of how the land has been used, and how can we restore nutrients or rest it to diminish weed pressure.”

One crop in the rotation is Floriani flint corn that’s ground for polenta. Eliza said the variety doesn’t yield well but has a beautiful red-skinned kernel that results in yellow cornmeal flaked with red. The cornmeal is popular with restaurants and at farmers markets.

With the help of several high tunnels and a greenhouse, Front Porch Farm grows year-round in some capacity, with crops directly in the ground and others in four, 150’ high tunnels. A greenhouse is devoted to starting seeds for plants that will be transplanted to the field. “We make beds in fall and plant outside as early as January,” said Eliza. “That gives us a good kickoff in March and April.”

For tomatoes, one of the most popular farmers market crops, Eliza chooses unique heirloom varieties as well as popular slicing and Roma varieties. “I like to have a wide variety of colors, shapes, sizes and flavors,” she said. “We also grow a lot of cherry tomatoes — it was our number one crop last year. They’re a hit with chefs.” Eliza said the Sun Gold is their standard, favorite cherry tomato.

Eliza has had issues with blight, so she chooses resistant tomato varieties and makes sure the fruits aren’t touched when they’re wet. “I haven’t seen too many other diseases in tomatoes,” she said. “It’s the perfect climate — really dry and warm. Crop rotation is also important. I grow a lot of potatoes, other solanums and strawberries that are susceptible to disease, so making sure they aren’t grown in the same spot every year is a big piece of how we ensure they don’t get bad disease.”

The biggest pest is the cucumber beetle, which Eliza said can be problematic for a variety of cucurbit crops as well as dahlias, basil and potatoes. “We manage it through prevention,” she said. “When we plant a susceptible crop, we use a row cover and get the crop established with the cover. Sometimes we’ll use an OMRI-approved spray.”

Like many growers, Front Porch Farm deals with spotted wing drosophila (SWD). Although the pest has been detected on the farm’s Obsidian and Triple Crown blackberries, a bigger issue in that crop is sunburn. After losing a substantial portion of the blackberry crop to sunburn last year, Eliza said the addition of shade cloth this season will help prevent it.

Several acres are devoted to olives, both green and black, grown for oil. Although the trees are still young, there’s been pest pressure from voles and moles that chew the bases of the trees, resulting in stunting. Eliza said the goal is to allow the trees to grow and mature before harvesting, so for the first several years, immature olives are removed to allow the tree to grow.

The farm includes more than three acres of flowers, both annual and perennial. Lead flower grower Zoe Hitchner, who blended her skills as a floral designer and a farmer, carefully plans each year’s planting. While most flowers are grown outdoors, she also relies on high tunnels for out-of-season blooms.

To determine what she needs for each season, Zoe looks at a variety of factors, including her customers. “What do people want, how much do they want and when do they want it?” she said. “I sell at the farmers market, to a number of florists in the area and to some upscale grocery stores in San Francisco. I try to grow for the markets I’m in.”

Customer favorites include ranunculus in spring, garden roses in early summer and dahlias in late summer. “We’re building our dahlia collection to fill one-half acre,” said Zoe. “We pull them up because they’ll rot if we leave them in the ground during the rainy season. It takes a lot of labor to lift, divide and store, then plant, but they’re worth it.”

In working directly with florists, Zoe grows what she thinks is desirable and sends an availability list every week so customers can place orders based on what she has. Customers who want a specific variety or color often contact Zoe ahead of time to let her know what they need.

Zoe said color preferences change from year to year, but not significantly. “This year people are buying a little more light blue,” she said. “Last year, they were more into yellow. There are some trends that happen but no dramatic changes. I can sell as many white flowers as I can grow; same with peach/blush colors.”

For the first flowers of the year, Zoe relies on the high tunnels. She plants bulbs in October, and when it’s rainy and cold in February, flowers are ready for harvest. “Winter growth outdoors is slow because the soil is so cold, but we can keep the hoop houses warmer and keep things growing,” she said. “It’s really hard to harvest and sell flowers that have been pummeled with rain.”

While Eliza delivers to some restaurants in the Healdsburg area, the primary outlet for Front Porch Farms crops are area farmers markets and FEED Sonoma, a wholesale distributer that distributes Front Porch Farms’ produce throughout the county into restaurants and grocery stores. “They’re a unique model,” said Eliza. “FEED is more flexible — they look at the availability from all the farms they work with and consolidate that into one list and pass it around the communities and restaurants in San Francisco, and then send specific orders back to each farm. They’ll order two cases of one thing and 15 cases of something else. There’s a lot of opportunity there because it doesn’t have to be as well planned as most other wholesale outlets.”

The farm is also home to a vineyard, which is managed by a vineyard consultant and a wine maker. Grapes are processed at a custom facility, bottled as Front Porch wine and sold wholesale and at farmers markets.