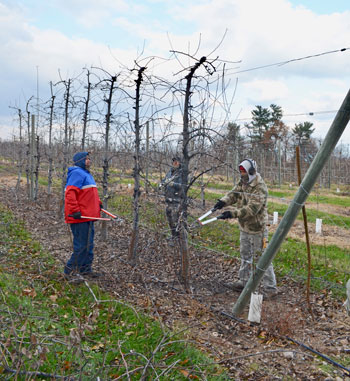 Growers are aiming to fulfill growing consumer interest in new pear selections. Dr. Todd Einhorn said, “There are many older pears, and varieties are hundreds of years old, but we’re typically seeing four or five cultivars in the market.”
Photo by Sally Colby

To satiate consumers’ growing interest in fresh fruit, many growers have started to focus on pears, a fruit that has taken a back seat to more popular apples, peaches, cherries and other fresh offerings. A variety of research programs throughout the nation have focused on developing traits necessary to successfully and profitably grow fresh pears.

Although Dr. Todd Einhorn is currently associate professor and tree fruit specialist at the University of Michigan, he spent 10 years at Oregon State University researching fresh pear consumption and the development of precision horticulture.

Quince is used in Europe as a dwarfing rootstock in high-density systems. However, Einhorn said quince isn’t without problems, including lime-induced chlorosis, inability to thrive in high pH soils, cold hardiness and sensitivity to fire blight.

Einhorn described limited work with Quince A in New York, adding that tree survival was good but there’s more work to be done. “We would like to have cold hardiness during dormancy, to -20º Fahrenheit” he said. “That’s extreme, but within the realm of possibilities for the East and Midwest. We’re looking for the ability of trees to acclimate and handle cold in fall, and de-acclimate in spring.”

The project started with a selection of 15 cold-hardy quince accessions from the clonal germplasm repository at the USDA in Corvallis, OR. “We screened the core collection that represents the diversity of quince around the world for cold hardiness for three years,” said Einhorn. “Based on those that were as hardy or more hardy than Pyrus rootstock (including OHxF 87 and OHxF 97) and several others as controls, we discovered 15 quince that are that hardy. We don’t know anything about their dwarfing capability, yield efficiency or the ability to produce large fruit. But that was the beginning because cold hardiness has always been the weak link in promoting quince in the U.S.”

During fire blight testing, researchers found a range of susceptibility. “About five or six were not resistant to fire blight, but they seemed tolerant,” said Einhorn. “We tested various propagation methods, and two western trials are entering third leaf. We’re hoping we have flowering and yield data this year.” Einhorn said the test plots were established in three foot-by-11 foot spacing, both with and without interstems because incompatibility is one of the challenges with using pear on quince. Comice served as the interstem, and trees were trained to a leader/spindle system.

“The biggest challenge in pear production is vigor,” said Einhorn. “Pears are incredibly vigorous, and the rootstocks we’re using are only 70% dwarfing relative to a seedling. That isn’t even close to what we want for highly manageable, high density orchards.” Einhorn said quince are highly desirable because of dwarfing traits and the fact that roots partition carbohydrates preferentially to the fruit, resulting in large fruit on small trees, aiding in precocity and early flowering and yield.

At the same time, projects tested Amelanchier (serviceberry), bred in Germany. “The German program has made intraspecific and interspecific hybrids using several species of Amelanchier,” said Einhorn. “The objective in that program was to breed a cold-hardy rootstock for pear. There have been previous experiments with Amelanchier as rootstock for pear that showed that it can be compatible – it can dwarf the tree and produce high yields. But most experiments were done in the 1950s through 1970s and were not performed using hybrid (clonal) selections of Amelanchier. They were using seedling rootstock, and there’s a lot of variability from tree to tree.” Einhorn added that many rosacea family rootstocks, including apple, Amelanchier, quince and Cotoneaster, can serve as rootstock for pear, although some are better than others.

Although earlier work was discontinued, a new research effort was underway by the late 1990s.  The project was initiated in Oregon using trees from Germany. “They screened the crosses for pear decline because that’s another major pear problem,” said Einhorn. “OHxF are resistant to fire blight and pear decline, which is transmitted by pear pyslla.” He added that Amelanchier is a non-host for pear decline, which is an especially valuable benefit. Researchers also evaluated Amelanchier for the ability to handle high pH, and evaluated it for compatibility. From a series of selections, researchers have narrowed down the work to one or two.

Einhorn said his work with fresh market fruit was to fulfill growing consumer interest in new pear selections. “We’re dealing with heirloom pears,” he said. “There are many older pears, and varieties are hundreds of years old, but we’re typically seeing four or five cultivars in the market – Bartlett, D’Anjou, Bosc, Comice and Crimson.”

One issue with fresh pears for consumers is understanding that there’s a ripening process involved. “There’s a little bit of effort to condition pears with ethylene prior to shipping or to condition them at retail stores before displaying to start the ripening process,” said Einhorn. “But I think what’s most common is that pears are out, they’re relatively hard, but they’re conditioned. They’ve had enough time in cold storage to allow them to ripen. European pears, with the exception of Bartlett, require a certain amount of chill to ripen appropriately on the countertop. If they don’t get the right amount of chill after harvest, you can keep them on the counter forever and they’ll never soften and come to that desirable juicy, buttery texture, and that differs radically by cultivar.”

Einhorn described Gem, a European pear that can be eaten crisp or ripened to a buttery, juicy texture in about five to seven days on the counter after 30 days of chill after harvest. There are many attributes that come with being able to eat a fresh pear crisp and expect a good eating experience. However, although Gem is a desirable pear, it’s susceptible to pear vein yellows virus so growers should seek certified virus-free budwood.

During research, Einhorn focused on vigor control, and learned a lot about root pruning, timing, training systems, hand thinning, chemical growth inhibitors and spacing. “We found that when we push the high-density plantings to even tighter spacing, we can control vigor because of the root-to-root and tree-to tree competition,” he said. “In our most recent planting, we’re seeing nice production on a three-by-12-foot planting, and three-foot spacing for pears is pretty extreme.” Einhorn compared new, tighter pear spacing to progress in establishing closer apple plantings for higher profit and manageability, noting that labor is always the main factor in orchard work.

“We have a good handle on the management of high-density orchards, even with OHxF as a rootstock,” said Einhorn. “We’re limited to about a four-by-12-foot, 908 tree per acre planting, which is actually high density, but it does require a lot of management to get fruiting when you want it. Sometimes there’s too much vigor on a high-vigor site.”

As is the case with other tree fruit improvements, canopy size is a driver. “The bigger the canopy, the more variability in fruit quality,” said Einhorn. “The big canopy has more shade in the middle, and while fruit in the middle is firmer, they’re smaller, have less sugar and acids and have no blush. These are all drivers to get to high-density, precisely managed orchards. We want to get around harvesting fruit with a huge range of quality.”